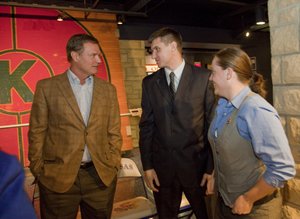 “That’s probably the most talented team we’ve had here, maybe by far,” Self said of the Big 12 regular-season and postseason championship team which advanced to the Elite Eight. “Think about it. We had Russell (Robinson) at the 1, Mario (Chalmers) at the 2, Brandon (Rush) at the 3, Julian (Wright) at the 4, Sasha (Kaun) at the 5. We brought ‘Shady’ (Darrell Arthur), Darnell (Jackson) and Sherron (Collins) off the bench. How many teams can bring three NBA guys off the bench? That was a fun team to coach.”

Brennan Bechard, Matt Kleinmann, Brady Morningstar and Brad Witherspoon represented the team Friday, as well as Self and assistant coach Joe Dooley. Bechard is KU’s assistant director of basketball operations; Kleinmann is an architect in Kansas City; Morningstar is a member of Tulsa’s NBADL team; and Witherspoon serves as an assistant coach at John Wood Community College in Quincy, Ill.

Agafonov, who works in management for a large construction company in Moscow, won indoor national championships in the weight throw in 2007 and 2008.

“When I got here yesterday, I felt like I was at home,” said Agafonov, who attained a degree in economics from KU despite the fact he knew no English upon arriving here. “I came to KU to learn something new, to see the world and to meet new people. It happened that I became a good athlete and good student. This is home for me.”

Gault, a fourth-year KU Med student from Spring Hill, was a two-time All-America defender for the Jayhawks from 2003-06.

“I can’t say there are too many people who have their name in stone and are still standing up and can talk about it,” Reamon joked. “This is an amazing place. The university has been with me forever. I never left Lawrence so KU has been there through thick and thin forever. To get a chance to have this many people care enough to come back to Lawrence and for us all to get together, (this) is a very, very special moment.”

Congrats to all of them 06-07 was a special team indeed, lot of fun memories from that squad

Self's most talented team was 06-07, when KU was just changing over from Nike to Addidas.

Imagine the kind of talent he would have hauled in, if KU had stayed with Nike. Just unreal to think how many rings he would have gotten. Probably 3-4.

I sure hope Self gets a shot at coaching with a full house again for a 5-10 year stretch before he is done. It could be his run at Wooden.

Re: Self--The last few seasons are like watching Muhammad Ali having to box with one fist tied behind his back.