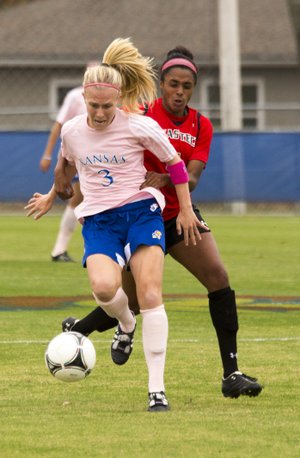 Unlucky is a term that often gets kicked around in soccer to describe why something went wrong. Following their Big 12 finale against Texas Tech — a 3-1 loss — Sunday afternoon at Jayhawk Soccer Complex, Kansas University’s players and coaches felt not just unlucky but also somewhat confused.

The game was tied, 1-1, in the final seconds of the first half when Kansas freshman forward Ashley Williams chased down the ball near the right corner. She could hear the time being counted down by the crowd, so she knew it would be cutting it close, but she played a cross toward the goal before the buzzer sounded.

The ball angled toward the goal and appeared to get touched by Red Raiders goalkeeper Victoria Esson before it ended up in the back of the net. Texas Tech coach Tom Stone raced 30 yards onto the field to argue no goal should be allowed while the Jayhawks celebrated, believing they had just taken the lead.

After a meeting between the referee, Chris Penso, and his assistants, they determined Williams’ shot didn’t count.

“You’ve got to be kidding,” KU coach Mark Francis yelled from the sideline as the KU players returned to their bench perplexed.

The controversial play had the Jayhawks (9-7-2 overall, 3-5 Big 12) still scratching their heads after the loss.

Williams said she took the shot out of desperation, hoping it would go in, and it did. The referee determined that didn’t matter.

“He actually said that I kicked it after the buzzer went off,” Williams said. “I don’t really know. I didn’t hear the buzzer. That’s why I kicked it.”

“That was unlucky all around,” she said. “The cross got off, the keeper punches it in to the back of the net, and then the buzzer goes. It’s inevitable that that was a goal.”

Francis felt certain the shot came before the buzzer sounded and should have counted, though he admitted he didn’t know the exact last-second shot rules.

“Regardless of whether that was a goal or not, we still had plenty of opportunities,” the coach said.

The difference Sunday, Francis added, came in Tech’s ability to capitalize on its opportunities. The Red Raiders (13-4-1, 4-2-1) had second-half goals from Paige Strahan (70th minute) and Briana Rohmer (79th minute), but Tech only outshot KU 17-16 on the day.

“We probably should’ve won 4-3 or 5-3 with the opportunities we had,” Francis said.

The Jayhawks’ lone score came in the 14th minute. Freshman forward Courtney Dickerson easily beat Esson and rolled the ball into the left corner to give KU a 1-0 lead following a misplaced header by Tech’s Mallory Yacullo.

Tech later tied the game in the 35th minute when Dawn Ward put a header past KU keeper Kat Liebetrau on a rebound.

Kansas put three shots on goal in the second half — two by Williams and one by junior forward Caroline Kastor — but Esson denied each of them.

Francis couldn’t fault any of his players in the loss, saying they played well. But now KU’s postseason hopes are very much in doubt.

“For our season to keep going,” the coach said, “we’re gonna have to win the conference tournament.”

The Jayhawks’ regular-season finale is at 3 p.m. Friday at Jayhawk Soccer Complex against Northern Colorado.

We still lost by 2 goals, so that goal at the half didn't really matter did it?