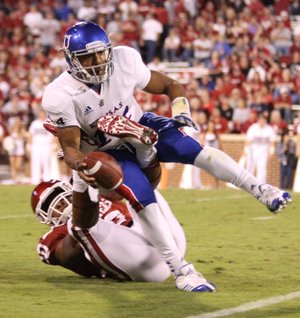 Norman, Okla. — Oklahoma defensive coordinator Mike Stoops scoffed when asked if his team spent any extra time earlier in the week looking at film of its next opponent, No. 5 Notre Dame.

“We worked on Kansas the whole week,” Stoops said following OU’s 52-7 victory over KU on Saturday. “That’s what I told our players. I said, ‘We work Kansas all week.’ Obviously, we think they’re a formidable opponent.”

The Jayhawks didn’t prove to be.

OU held a foe scoreless in the first half for the first time all season and also limited KU to just 3.6 yards per play.

“Overall, it was a pretty business-like four quarters for us. They didn’t come in and do a whole lot,” Stoops said. “We just played. It got a little boring, but we just played our base defense most of the night and just played ball.”

Later, Stoops hinted once again that he expected more surprises from the Jayhawks.

“We prepared for a lot more than what we saw,” Stoops said, “but that’s their decision.”

Part of the reason KU had OU’s full focus was its performance in a 20-14 home loss to Oklahoma State on Oct. 13.

“They outgained Oklahoma State a week ago. Again, I think that was good that they had an opportunity to win against Oklahoma State in the fourth quarter,” Stoops said. “That got our players’ attention.”

The Sooners have won eight straight games against the Jayhawks. Also, OU’s 38-point halftime lead was its largest since 2009.

Still, Stoops said there were areas where his defense could improve.

“I thought our tackling was very sketchy early,” Stoops said. “I thought they got position on us on one of the tight ends that dropped the ball down the middle — a route that we had worked and let him split our defense a little bit. Just little things like that.

“They picked our linebacker on a wheel route, and the quarterback didn’t see him. We had a guy running free. Some things we may have gotten away with that y’all may not have seen because you’re looking at so many different things, but just little things that we can get better at.”

With the victory, OU head coach Bob Stoops improved to 19-1 in October home games with the Sooners.

“Obviously,” he said, “I feel very good about the way our guys played here tonight.”

I wouldn't be upset if OU overlooked us. Why wouldn't they?

Sure they mention the OSU game,butI do believe weather was a factor in slowing them downnot us.

This team has been in trouble since Magino's last year. Haven't won a conference game since the year before. He started this down hill slide.

Gill turned it into a landslide with his inability to get things done on and off the field.

Hopefully CW gets it done and gets it turned around, but he has on heck of a mountain to climb back up to get this team looking competitive week in and week out.

You know Stoops told his team "if they don't rough the kicker with 2 minutes left" they have a chance to win while watching the Ostate film.

Yeah, like OU really thought KU would be formidable. Riiiiiiiight . . .

I want whatever they're smoking.

Two years from now Sims should be playing on Sundays, but he's got through next year to train his replacement.