Kansas University’s soccer team, which had been shut out in three of its last four games, rediscovered its offense in a 4-1 rout of Iowa State on Friday at Jayhawk Soccer Complex. 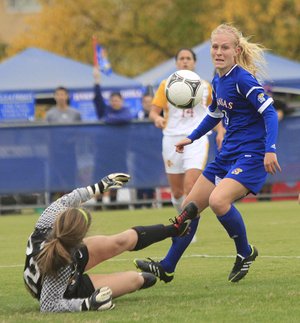 Senior Whitney Berry scored a goal and had an assist, while Courtney Dickerson, Caroline Kastor and Nicole Chrisopulos also contributed goals for KU.

KU, which dropped 1-0 decisions at both Oklahoma and Texas last weekend, outshot Iowa State, 13-4 through the first 60 minutes.

Freshman forward Dickerson scored in the 27th minute after she accepted an Amy Grow pass in the center of the field, 15 yards from the ISU net. She slipped a shot past Cyclone goalkeeper Maddie Jobe for her third score of the season. It marked Grow’s fourth assist.

Less than three minutes later, Kastor scored with a shot from inside the right corner of the ISU penalty box. It marked the Wichita native’s 10th goal of the season.

Kansas ended the opening period with a dominating 6-0 lead in shots on goal as five different Jayhawks had shots off in the opening 45 minutes.

Just over five minutes into the second half, Berry was pulled down in the ISU box, resulting in a foul and KU penalty kick. Berry, who had failed to convert on a PK earlier in the match, struck her fifth of the season for a 3-0 lead.

Berry next set up fellow senior Chrisopulos for her first score of the season. Berry slid through the ISU defense and found the Rowlett, Texas native on the right side of the Cyclone box. Chrisopulos then used some fancy footwork and a left-footed strike to tally the Jayhawk’s final goal. It marked the first goal of Chrisopulos’ career.

With the goal and the assist, Berry added three points to her season total which now sits at 17. She has also collected 76 points in her KU career which ties her with Monica Dolinsky (2006-09) for second on the all-time KU points list.

The Cyclones scored in the 75th minute when the Big 12’s goals and points leader, junior Jennifer Dominguez, headed in a ball after an ISU corner kick.

Kansas will next meet Texas Tech at 1 p.m. Sunday at Jayhawk Soccer Complex.