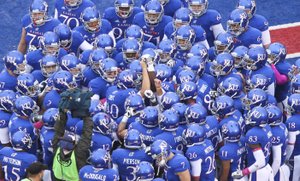 Oklahoma State’s football team has put up some astronomical numbers on offense the past couple of seasons.

Partly because of that, coach Mike Gundy had a hard time accepting the fact his Cowboys gained just 371 yards in a 20-14 victory over Kansas on Saturday in Memorial Stadium.

“It was a serious struggle and painful for me to watch,” Gundy said after the Jayhawks suffocated the country’s total-offense leaders, who entered averaging 659 yards a game. “We’ve been fortunate over a number of years ... we just kind of roll out there on offense.

“It’s frustrating to me because that’s my background,” added the former OSU quarterback, who on Saturday tied Pat Jones for most wins as a Cowboy head coach (62 in eight seasons).

“Up front, in my opinion, they did not whip us but they won the battle,” Gundy added. “When you have a downpour (first half), you will struggle throwing the ball downfield. That wasn’t a factor at all the second half.”

Quarterback J.W. Walsh completed 18 of 29 passes for 255 yards, one touchdown and an interception.

“They knew the weather conditions. They were loading the box and played the run because they knew it would be tough to throw at first,” Walsh said. “It was tough in the rain to get the passing game going. That’s no excuse for me. Once we got out of the delay (heavy rain and lightning caused stoppage the first half) and the rain stopped, we tried to open the pass game more, and thankfully we got the win.”

OSU running back Joseph Randle, the brother of former KU back John Randle, first said, “no comment,” when asked if he thought KU was focused on stopping the run.

“You get what they give you,” Randle said. “With the conditions, you’ve got to nickel-and-dime it sometimes. The big run isn’t there so you’ve got to take the hard-earned yards. I’ve been playing football a long time,” the junior out of Wichita Southeast added. “Some games are like that; some games the run is there. It’s a rainy-type day; that’s the type of game it was.”

KU, which trailed 20-0, made a game of it in the fourth quarter behind backup quarterback Michael Cummings.

“They did a nice job. They didn’t quit,” said OSU defensive coordinator Bill Young, a former KU assistant. “They fought. I’m sure their coaches are proud of them.”

KU had a chance at one final possession in the closing minute, but that was erased when the Jayhawks roughed OSU’s punter on a fourth-and-eight attempt from the OSU 43. The Cowboys simply ran out the clock.

“I can’t deny when that (penalty) happened I wasn’t glad we didn’t have to go back out there and stop their offense,” Gundy said. “In this game, momentum is a big factor, especially when you are on the road. It’s good to get out of here with a win.”

"The big run isn’t there so you’ve got to take the hard-earned yards." Hmm... the big run was there for Sims...

Early when it was raining, Randle seemed to be hounded by Jake Love with good support from T Opurum and B McDougland. iirc, Randle had only one rushing attempt good for > 8 yards on 17 attempts in the 1st half.

I'll be glad when we have to painfully watch some wins.