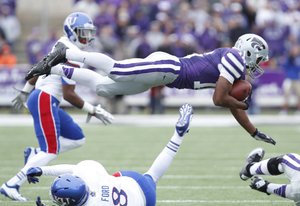 Manhattan — The fourth quarter of Saturday's 56-16 loss to Kansas State proved to be the answer to the question that many Kansas University football fans had been asking: When would KU coach Charlie Weis replace quarterback Dayne Crist?

But even though red-shirt freshman Michael Cummings ran the Jayhawks offense during the fourth quarter for the first time this season, Weis cautioned against making too much of the move.

"He's gonna have to get some playing time to see what we've got," Weis said of Cummings. "I'm glad we got him in there and he got an opportunity to throw the ball a couple times and go ahead and run the offense. But, right now, I wouldn't read anything into changes in positions and depth charts and everything. I think I have to be objective and look at every position, and quarterback's gotta be included along with everything else."

Cummings' snaps were largely meaningless, but the Jayhawks did move the ball fairly well against the Wildcats' first-team D when he was on the field. Even though most of Cummings' duties consisted of handing off to junior tailback Taylor Cox, he did complete two of the four passes he threw and, more importantly, got his first live action.

"It felt good to finally get into the game for the first time and get that first game hit out of the way," Cummings said.

Asked if it was difficult to take the field with the scoreboard stacked against him, Cummings offered the classic backup QB answer.

After a fast start that included a 19-yard touchdown reception and six catches for 63 yards in the first quarter alone, KU sophomore Tony Pierson left the game with an undisclosed injury and did not return.

His status for next week is unclear.

"They'll X-ray him and stuff when we get back," Weis said after the game.

While the specifics of Pierson's injury were vague, one thing that was clear was the importance of his role within KU's offense.

"Tony's one of our few home-run hitters," Weis said. "You saw on the screen pass. Most other guys would get 10 yards, but Tony makes guys miss in the open field and that's, as much as anything, the key ingredient."

"It isn't like you haven't practiced other guys to do the same jobs," Weis said. "But they're not the same player. It definitely hurts you."

Saturday's loss marked the first time in Sims' three-year career that Jayhawks lost when he topped the 100-yard mark. Sims' big day was his first 100-yard outing since gaining 110 yards against Northern Illinois in 2011 and also was the first time a player topped the century mark against the K-State defense since Texas A&M's Cyrus Gray did it last November.

Tre' Parmalee's 19-yard catch in the second quarter marked his first career reception; fullback Nick Sizemore also hauled in his first career reception in the fourth quarter; sophomore wide receiver Andrew Turzilli's five receptions were a career high; sophomore linebacker Ben Heeney's game-high 14 tackles also were a career high; offensive linemen Randall Dent (right guard) and Aslam Sterling (right tackle) started alongside one another for the first time this season; KU's opening-drive touchdown was the first against a BIll Snyder-coached team since 2004 and the first for the Jayhawks this season.

The Jayhawks won Saturday's opening coin toss and elected to defer their choice to the second half. K-State chose to receive the opening kickoff. ... Sophomore linebacker Victor Simmons served as the team's fourth captain after being voted by KU's coaches as the top special teams performer against Northern Illinois. ... Temperature at kickoff was 44 degrees under cloudy skies with winds of 7 mph out of the north.

I have no reservations about Weis moving forward but that doesn't mean this year isn't a catastrophe in the making. We should be 3-2 right now with a QB we are smitten with. We should be in position to steal a game or 2 in the Big 12. This team was built to show progress immediately with all of the 5th year guys. Hurts to watch these guys at the moment.

On a more positive note: Barring injury or an unlikely jump to the NFL, James Sims looks like he is going to have a great chance to leave Kansas as the all time leading rusher. Go Sims!!! Bring back the flat top!!!

"He's gonna have to get some playing time to see what we've got," Weis said of Cummings.

Seems there's been ample opportunity to give him some snaps prior to yesterday without losing much at the QB position. In the one series he played in he showed good quickness, field vision, arm strength (accuracy hopefully will come), and maybe most importantly that intangible ability to make something happen when a play breaks down. This last one is hard to tell because he just got the one series. All I know is seeing him briefly only made me want to see more, particularly in a game where we're not trailing by 40 and everyone has already packed it in.

Congrats to Victor for the ST award 2 weeks ago. Does the staff make this info known in advance? It would be nice to have a 4th captain column each week.

We don't know until game day.

With the way our line is blocking there is no way we will even come close to winning another game. Todd Reesing would always take a step forwar when the pocket would collapse not turn around and run backwards and get tackled. I just dont understand why this guy cant get coached up on this and if he is and he is not doing what he is told than get him out of there.

While I agree the job was given to Crist, I will not criticize his effort and work ethic. He is a class young man and no one is sadder than I that he has been unable to meet our expectations or even be adequate at his job.

As much as I hate to see it, the time has come for Cummings to get at least half the snaps for a couple of games to see which guy gives us the best chance when we play ISU and Texas Tech.

jjj, I am not criticizing Crist's effort, and he may very well be a class young man, but my point is that when u know there is competiton for a job, u will work harder than ever to make sure u r at the top of your game. maybe even though he was a 5 Star recruit, he may not have been quite as good as his rating. we all know many of those ratings, including in b-ball, are only as good as who is promoting the kids. maybe it was not just the injuries that kept him out at ND. we really don't know, and never will know that. but the bottom line is that Cummings should have played in previous games, and more when he did finally play. also, Charlie needs to re-think his already put in place plan about next years starting QB, and give all of the kids of "Fair Chance"! He needs to do the right thing for the kids, and the program!

PS: I do think Charlie & Company will get things turned around, but I bet they will be given timeto do so. It might even happen sometime this season, because I do think the Hawks have a lot of talent, and excellent coaches. Can someone tell me the name of the coach who worked under Turner Gill, who had to resign because of health reasons, and how is he doing now? I do think Turner made a big mistake, by letting his replacement come in and change everything around, but some coaches trust their assistants completely.

thanks bad dog. for some reason, I just lost it on his name. I sure hope he is ok, and makes a complete recovery!