The Kansas volleyball team reacts with excitement as they are announced as the No. 11 overall seed and will play host to the first two rounds of the NCAA tournament during a selection show watch party on Sunday, Nov. 25, 2012 in the Naismith Room at Allen Fieldhouse. The Jayhawks will play Cleveland State on Friday at Allen Fieldhouse. 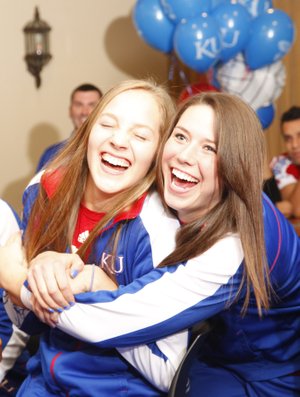 Kansas volleyball player Sara McClinton, left, is hugged by Amy Wehrs as the two watch the NCAA selection show with their teammates on Sunday, Nov. 25, 2012 in the Naismith Room at Allen Fieldhouse.

Never has Caroline Jarmoc been more excited to go to class.

Jarmoc, Kansas University’s junior middle blocker, admitted to being a little stressed out about how she was going to juggle her chemical-engineering workload this week while also preparing for a potential road trip in the NCAA Tournament.

That’s not a concern any more, as Jarmoc and the rest of the Jayhawks will be hosting the first two rounds of the NCAA Tournament — an announcement they saw live on ESPNU while attending a watch party on Sunday afternoon at Allen Fieldhouse.

“Being able to host is all we could ever ask for,” Jarmoc said. “Everybody is so pumped.”

KU earned the No. 11 overall seed and will host Cleveland State in the opening round at 6:30 p.m. Friday at Allen Fieldhouse.

The Jayhawks weren’t certain they would be hosting while watching Sunday’s selection show. Though the Jayhawks finished the season No. 7 in the RPI, they were ranked No. 20 in last week’s coaches poll.

The top 16 teams in the NCAA are selected as hosting sites.

“I’m sure there’ll be a number of people out there that’ll wonder if we got seeded too high. This team plays with a chip on its shoulder regardless,” KU coach Ray Bechard said. “We can come up with something to get them motivated for sure.”

The KU-CSU winner will face the winner of Friday’s other match-up — between Arkansas and Wichita State — at 6:30 p.m. Saturday.

It is the first time in school history KU has been selected to host in the first and second rounds.

“At the beginning of the year, we knew we’d be good, but we never expected to be here at this point,” KU junior libero Brianne Riley said. “Not only are we in the tournament, but we have a really good seed, and we’re at home, which is crazy.”

This is the Jayhawks’ fourth NCAA Tournament appearance, all under Bechard. KU last made the tourney in 2005, when it lost in the opening round to UCLA, 3-1.

Cleveland State, which has won 13 straight matches, finished the regular season 23-6, 13-1 in the Horizon League.

“Hopefully there will be enough Jayhawk fans to go around,” Bechard said. “It would be great if we could get a large student contingency there. ... I would hope that if we promote it like I know we will that we could get a really nice group of people to see some good volleyball.”

A potential battle of the Kansas teams! Awesome.

Wonderful news about hosting the 1st and 2nd rounds at The 'Phog' - but even more so about the recognition you all have received for a great season. Keep on 'keepin on'. Sorry I won't be able to be there for excitement of watching in person, but will follow you from Prescott, AZ.

Congratulations on a great regular season! Best of luck in the NCAA Tournament! RCJH!

What wonderful news, keep on winning Hawks and I hope for very large turnouts!!!!!

Great news to read—looking forward to hearing more about the team in the tournament!!

How is that going to work?? MBB has a home game on Friday at 7

It's at the Sprint Center.

Tickets are only $10-12? For the entire First and Second round?

Tremendous!!! I wish I could be there. If I was in Lawrence I would definitely be attending.

Does anyone know if either of the first two rounds will be on TV?

I hope this teams success is another signal, along with the success of womens basketball, that the CULTURE of losing in many of KU's non-revenue sports is changing. Congrats ladies !!!

Awesome! Am too far away to come to Lawrence, but will definitely be watching online.

WOW..if it was up to me, I'd change the team name to the Kansas Jay-Hotties...great work ladies. remember, in volleyball, the bloodier, the better...smash and crash!!! :)