Kansas guard Ben McLemore points to the CBE Classic championship trophy as he, Tyler Self, right, and the rest of the team gather for photos following their 73-59 win over Saint Louis, Tuesday, Nov. 20, 2012 at the Sprint Center in Kansas City, Missouri. 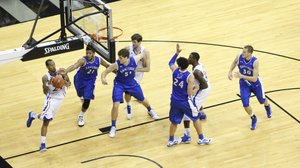 Images from Tuesday night's game against Saint Louis in the CBE Classic.

Kansas coach Bill Self talks to reporters following the Jayhawks' 73-59 victory over Saint Louis on Nov. 20, 2012.

Getting better: Self said the goal, of course was to win the tournament, but something else as well.

“We got better over here. That was key,” he said of the Sprint Center games.

His players had some fun during the awards ceremony following Tuesday’s 73-59 title win over Saint Louis. Freshman Jamari Traylor (two boards, 12 minutes) wore the CBE title banner as a cloak, draping it over both shoulders. The Jayhawks wore CBE Classic champion T-shirts and hoisted the team trophy before exiting the court.

Attendance: The attendance for the final was listed at 10,315 in an arena that seats 18,972. The games were not part of KU’s season-ticket package. Several thousand fans remained in their seats for the awards ceremony.

Still ill: KU coach Self continues to battle a cold, which plagued him both nights of the tourney. Injured forward Zach Peters, who is out with a rotator cuff injury with no return planned anytime soon, did not attend either game. Self said he was sick.

Young’s line: Senior Kevin Young started his second straight game at forward. He did not attempt a shot in 27 minutes. He was 2-of-2 from the line and had eight boards with three assists.

Team notes: KU extended its lead to double-digits (21-10) at 9:50 in the first half and remained ahead by double-figures until the 3:51 mark of the second half when SLU forward Cody Ellis cut it to nine, 65-56. ... Saint Louis' first bucket went in off the hands of KU’s Ben McLemore, but the goal was credited to SLU's Cory Remekun. ... KU was out-rebounded in the first half, 17-16, but won the board battle, 33-30. ... KU tied a season-low set the night before (vs. Washington State) with nine turnovers. ... KU went 18-for-22 from the free-throw line and completed the two-day stay in Kansas City at 38-for-44 (86 percent). .. Releford broke his previous career-high in three-pointers made (three, twice) with four in the first half alone. ... Releford was the only Jayhawk to attempt a three-pointer in the first half (4-for-6). He was 4-of-7 overall. ... Jeff Withey had a season-high in blocks (seven) and steals (two). ... Elijah Johnson's nine assists tied a career high previously set in his freshman season against Alcorn State. ... Naadir Tharpe hit a three-pointer with 15:23 remaining in the second half. He is the only Jayhawk with a made three-pointer in every game this season. ... Perry Ellis played less than 10 minutes for the first time this season (nine). He had four points and three boards.

Keller’s take: Kyle Keller, who worked three seasons as video coordinator on Bill Self’s KU staff, is a second-year assistant at Texas A&M, which defeated Washington State, 55-54, on Tuesday in the consolation game after losing to Saint Louis, 70-49, Monday.

The Monday loss prevented a matchup in the finals against KU.

“I don’t think it’s any fun playing KU. It never has been,” Keller said before the start of the tourney. “It’s always been a grind no matter what players are in that uniform. Our game against them in the Sprint Center last year was a nightmare. They took us to the woodshed.”

The Aggies are enthused over freshman guard J’Mychal Reese, who chose A&M over KU and others in recruiting. He had a bad game against offensively against SLU with zero points off 0-for-3 shooting with four assists and two turnovers with four steals in 33 minutes. He went for eight points, hitting two threes versus Washington State.

“He’s been good,” Keller said of the 6-1, 177-pounder from Bryan (Texas) High. His dad, John, joined the A&M staff as a full-time assistant this season.

“It’s nice to have a point guard who can shoot and score. He impacts the game. He’s always been able to score points. Now, can he facilitate at this level?”

Tuesday’s game, by the way, was decided by Elston Turner, who hit a three with two ticks left. Former KU guard Royce Woolridge had time to hoist a half-court shot that fell short at the buzzer. Woolridge scored six points off 1-of-4 shooting with one assist and one turnover in 27 minutes.

Was this a notes section for KU or Texas A&M? Just wondering.

Actorman - did you ever figure out your TV scorebox issue? One other thought . . . it could be a problem on your TV only. Is your TV HD? If so, check your settings.

There should be a button on your remote called "View Mode" or View Finder" or something with "View" in it. (The remote referenced above is the one that came with your TV - Sony, Mitsubishi, etc. - not the one from your cable provider.)

Click it. Look at the drop down list. Make sure you (or your kids, spouse, roommate) have not set it to one of the "stretch" modes. I use the "Dot to Dot" option on ours. If you're stretching something that has already been stretched for HD, then the score box graphic will not fit on the screen. This would be a problem whenever the scorebox is in a corner position (rather than centered.)

That's one tournament down, two to go!

I wonder how many votes SLU's Ellis received. He looked pretty good last night and the announcers sounded like he had a good first night as well.

They gave him an oscar.

Def saw Self cough a couple times when the camera cut to him.

It's a bit ridiculous that the Sprint Center games weren't part of the season ticket package. No wonder only 10,000 fans attended. It can't be that much skin off the teeth of KU Athletics to let season ticket holders attend for free.

For games in the Spring Center, KU Athletics could foot the bill and purchase tickets for every one of their season ticket holders. It'd be a drop in the bucket as far as the department's $$$ goes, and it would bolster attendance and keep fans/Williams fund members happy. It's Kansas City after all. KU should be doing everything in their power to bring out the fans. Bottom line is 10k people for a KU bball game in KC is pretty sad.

Rap, you've nailed it. For KU to include the games, one of two things would have to happen: 1) the price of the packages would increase to reflect the cost of the additional tickets; or 2) KU would have to cough up the cash for the tix out of their own coffers. The latter isn't going to occur, and the former is going to cause just as much grumbling as is heard now, so the choice is to let every ticket holder make the choice themselves.

Peters is sick but differently than everybody may envision.

Enough. Either give some actual insight or keep it to yourself.

I thought I saw Jason Sudeikis in the crowd. Woolridge is BAD. Glad he transferred.

In his defense, he doesn't have a lot of help around him. That entire team is bad. He did seem pretty athletic. Still, I think he made the right call in transferring. He wouldn't be playing much in a KU uniform. I wish him the best, though.

Playing so little has to be tough for Perry Ellis. With his skills I would think he needs only to learn how to be aggressive, how to bang inside without fouling, to get his minutes. Time with Hudy will probably make a big difference for him, too. I wish him luck. We need him. It's only a matter of time.

I for one do not understand why the crowds were so poor for this event. No it was not part of the season ticket package, but it wasn't in 2008 either. The building was full that year. For the record, KU ticket holders & Williams Fund members were offered the opportunity to purchase this event, so there has to be some other issue here.

I realize the '08 CBE games of Washington and Syracuse are better draws probably than Wash St and St Louis this year, but quality of opponent has generally not stopped KU fans from attending games, regardless of where it is played. Hopefully this will not be an issue in the future, because we will play this event about once every three or four years.

I think there were multiple factors. First, the competition was pretty poor. Second, KU plays in the Sprint Center again in another week or so, and that is part of the season ticket package. Third, I really think the economy is an issue. Maybe not for the normal season ticket holders, but I think lots of families usually come to games like these. In recent years, I think most people are stretched a little thinner when it comes to having extra money, especially this time of year.

Plus, my experience has been that it's pretty much a royal PITA to go to games at the Sprint. Limited parking, heavy traffic.

I'd parrot what Jim said. I was there a few years ago for this with Syracuse and it was packed to the gills as if it were an NCAA tournament game. Last nights turnout was shocking. I could have understood it not being a sell out, but both 'ends' were ostensibly empty. SLU actually had a good contingent on hand from what was clearly their schools take -- maybe only a few thousand, but they packed it. The fans that we're there were good and loud, but it was odd that there were so many no shows.

As others have said though, they did make the offers to WEF folks and its obvious not a lot took the plunge on that. Who knows. I'd guess being during Turkey Week could be an issue, but a few years ago it wasnt. Dunno.

We looked good, and I think SLU is a decent team... especially on D. WSU was terrible. They barely looked like a D-1 team... either night.

I guess we need to hear from KU fans in the KC area as to why they skipped it. Had SLU been ranked, which they easily could have been, it might have had a big impact. Majerus leaving dropped their allure considerably, but it was still a great opportunity for those w/o season tickets to catch at least one quality KU game in a nice arena.

Lets just hope Peters is going to red shirt and come back strong next year.