Opinion: Jayhawks get production from 3 at the 4

Kansas forward Kevin Young and Washington State guard Will DiIorio chase down a loose ball during the second half of the CBE Classic, Monday, Nov. 19, 2012 at the Sprint Center in Kansas City, Missouri. 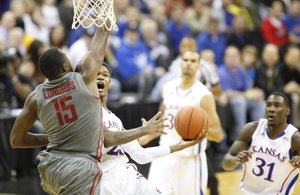 Images from Monday night's game against Washington State at the Sprint Center.

Kansas City, Mo. — Bill Self’s search for a productive power forward resulted in the coach starting a third different player at the position in the team’s fourth game of the season Monday night in the Sprint Center.

Freshman Perry Ellis, easily the most skilled scorer, ball-handler and passer of the trio, started the first two games. But since a rough night against Michigan State in Atlanta, during which his lack of physical play was exploited, Ellis has come off the bench.

Red-shirt freshman Jamari Traylor, the biggest body and most explosive athlete of the three, replaced him for a game in the starting lineup.

It was senior Kevin Young, the best rebounder of the bunch, taking his turn in the starting lineup against Washington State.

Ellis, Young and Traylor combined to play 47 minutes and produced 21 points, 17 rebounds, four assists and two blocked shots. They made 5 of 9 shots from the field and 11 of 11 free throws.

They all played a part in Kansas blasting Washington State 78-41, a blowout that enabled Self to rest his starters so that they’re fresh for tonight’s game against Saint Louis University in the CBE Classic title game.

“I think it means a lot,” Young said of the trio’s production. “It’s showing how much we all improved at the four spot because all of us play hard to work for that spot, and that’s why there have been so many different changes in the lineups in the last couple of games. It pushes each and every one of us to be able to start.”

Young worked up a pre-game sweat with the rest of the squad in the layup line, and it wasn’t until the team went back into the locker room that he learned he was getting the starting assignment with every-game starters Elijah Johnson, Ben McLemore, Travis Releford and Jeff Withey. Young said it surprised him “a little bit.”

He knew what he needed to do to give himself a shot at keeping his name in the starting lineup and he did it.

Young produced four points, a game-high 10 rebounds, an assist and a steal in 18 minutes.

At 6-foot-8 and 190 pounds, Young has the smallest build of the three players who work alongside Withey, but that doesn’t keep him from leading the team in rebounds per minute. A broken bone in Young’s right hand kept him from playing in the season opener, and he has logged just 40 minutes, enough time to total 17 rebounds.

The key traits to his rebounding success?

“Just reading where the shots are coming from and trying to get inside position,” he said.

Center Brock Motum, a native of Australia, was Washington State’s lone Big 12-caliber front-court player. The rest of the players Ellis, Young and Traylor faced couldn’t compare to the big men Michigan State brought at KU, but you can only play against the team on the schedule. The three power forwards did a nice job of not playing down to their competition and built some confidence in the process.

This may be the best way to go for awhile to keep the hunger burning in these guys. Damn good stats if you ask me, plus we were able to see White & Adams on the floor during the many different combos that HCBS parlayed into this beatdown. The later will be OK on some smaller, slower opponents defensively, but P Jackson & the like will be really fast for these guys (all of them) straight out of high school BB. IMO White needs to be in the mix more because of his deadly shooting. Some nights we all know he will be asked to answer the bell. He could truly be the Downtown Terry Brown for the 2012-2013 run to the roses.

It may just be a season long position 4 by committee. I don't think any one of Jamari, Perry, or Kevin have everything that is needed at the position, so Self rotates them to get in series what he would usually get from a single player, like Marcus Morris, Thomas Robinson, etc. When he needs some points, Perry goes in. When he needs some boards and speed, Kevin goes in. When he needs some toughness guarding their four and some explosive help elsewhere, then Jamari comes in. I think this may continue all season. And when he needs someone to give Jeff a blow, then he sends which ever guy is most rested in. Usually Jamari.

I have named this composite 4 JaPerVin Jayhawk (JamariPerryKevin). Last night JaPerVin played like an All-Conference guy. 21 points and 17 rebounds. Huge, huge, numbers out of a four.

JaPerVin Jayhawk is now our secret weapon. And he NEVER gets tired, or too fouled up. :-)

If we want to make a final four run...Ellis has got to develop into a consistent top notch power forward.

When it comes down to it in March...when we're playing a sweet 16 game against someone like Mich St or Colorado...we will need that presence to not only score...but to help Withey defend the post.

Ellis will get there. He needs to learn to assert himself more and be more aggressive. I love the stoic demeanor, but I believe his best basketball down the road will be when he lets loose and shows a little emotion.

This will happen the first time a Big XII opponent screws with him. A kid that talented getting angry.....that will be fun to watch.

Two days ago, I would have agreed. Now, no.

JaPerVin Jayhawk, our committee of three at the 4, is very possibly the best player on our team now. He JaPerVin had 21 points and 17 boards last night. JaPerVin is way better than Perry, or Jamari, or Kevin can ever hope to be individually this season.

JaPerVin Jayhawk should be up for the Wooden Award. JaPerVin is that good! The only think JaPerVin will have trouble with will be wide loads, but JaPerVin has 15 fouls to give at the 4. And in the XTReme Era, in the Madness, having 15 fouls to give, is really like having 30 to give. The refs will never foul out JaPerVin EVER!!!

I really believe there is a chance that JaPerVin could become the decisive edge over the course of the season, if we can just get EJ healed up, and Naadir guarding even a little better.

They played well against a bottom tier team, but that's a long way from season's avg. or production against quality teams.

It is also important to recognize that this total was for 47 minutes. That's really 2 players (30 & 17 minutes) with some of the backup minutes giving Withey a rest. At 60% (30 Minutes), 12 pts & 10 boards is still real nice production (against WassU), but the real test will be to see what kind of production we get against OSU or some of the better teams on the sched.

I suppose you're copyrighting that word?

I suppose you're ignoring the copyright infringement of your alias. :-)

Make that "near," Rooster.

Frankly, slayr, this is Self thinking outside the box waaaaaaaay ahead of all of us. That's why he gets the big bucks!

Is it just me or does Will Dilorio look like he has been scaled down to midget size in that photo? It obviously has something to do with the camera perspective, but he is clearly in front of Kevin Young but Kevin and everyone else in the photo looks like a giant compared to him.

I enjoy watching Young play. He always is so enthusiastic and does a lot for the team. Ellis has such a great upside. He just needs a little time to develop the aggressiveness and the moves to handle other bigs. This is going to be a fun year to watch this team.

jessej421, Coulda' been my pal Jeff, with the moffpix.com, Baylor's bigger than life from Waco view taking that shot from his proverbial "under the desk" angle. LOL. Next time I see him I'm hittin' him up for a press pass. Haven't looked at his site yet, but he may have flown to Wacko for the KSU debacle. If you've not met him, check out the site. He really does great stuff for SI, Royals, BG12, Squaws (Chiefs), etc. Super great guy too, one of the best you'll meet. Phil

I concur, slayer nailed the three. Will work strategically as well as for the productivity aspect. With this young of a team, all options remain open. But I still think he needs to get the new sharpshooter more game minutes. Hope tonight may be a preview of the new Andrew "Shoots the Lights Out" White Show, but a reality check says HCBS is too set in his ways for that.