Kansas defenders Jeff Withey and Travis Releford extend to defend against a shot from Chattanooga guard Farad Cobb during the second half on Thursday, Nov. 15, 2012 at Allen Fieldhouse. 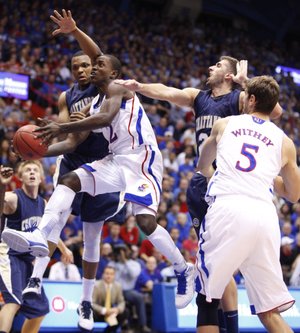 Kansas coach Bill Self talks to reporters following the Jayhawks' 69-55 victory over Chattanooga on Nov. 15, 2012.

More than one third of the Chattanooga basketball team's made shots on Thursday night came from the right hand of freshman guard Farad Cobb.

In the first half, when Cobb made six of seven three-point attempts, that was enough to stake the Moccasins to an eight-point halftime lead and put a scare into the Kansas University squad and the Allen Fieldhouse crowd.

However, by game's end, Cobb (21 points on a UTC freshman record 7-of-8 shooting from three-point range) finished with just three more points than he had at halftime and the Jayhawks (2-1) pulled away for a more-comfortable-than-it-seemed 69-55 victory.

Months from now, no one will remember the score of this one or the fact that KU freshman Ben McLemore scored 25 points and senior center Jeff Withey popped in a double-double. They will remember Cobb, though. And the experience does not sound like something the 6-foot shooting guard from West Palm Beach, Fla., figures to forget anytime soon either.

"It means a lot because I know how many good players have come through this (KU) program," said Cobb, who could not stop smiling in the postgame meeting with the media. "Just to go against Kansas was a big deal for me, and I just wanted to have a big game."

To call it big would be an understatement. Cobb's performance brought to mind the lights-out display by Oral Roberts' Marchello Vealy in 2006. That night, when ORU upset No. 3 KU in the Fieldhouse, Vealy, a sophomore, drained seven of eight three-pointers despite having made just one of 13 during his entire freshman season. At least Vealy had been out there before, though. Thursday's larger-than-life performance from Chattanooga's smallest player came in just the second game of his college career.

"I told him to make all of those, too," Chattanooga coach John Shulman joked after the game.

Cobb's stellar first half featured a variety of makes. He drained open looks, worked to hit step-back threes and even threw one in with the shot clock winding down and the home fans roaring in his ear. None of it mattered.

"I was like, 'If I get the first one to go in, I'm going to shoot another,'" said Cobb, who hit just three of 11 shots, including one of five three-point attempts in the season opener last Monday. "They kept falling, so I didn't feel like I was going to miss as long as I got a clean look at the goal."

And therein was the problem for the small guard. After watching Cobb have his choice of jump shots during the first half, KU coach Bill Self stuck 6-foot-6 senior Travis Releford on him in the second half. The result? Cobb not only made just one shot, he attempted just two.

"I thought Releford had a good game," Shulman said. "He scored two points, but he changed the whole complexion of the game defensively. He shut down our points."

Added Cobb of the job Releford did on him: "He was taller. I didn't want to force it. I just couldn't get that many (shots) up."

Although five different Moccasins players combined to hit 11 of 23 three-pointers during Thursday's loss, KU held UTC to just 35-percent shooting, a number that included just nine two-point field goals. In fact, during a second half in which they were outscored 41-19, the Mocs made just three of 16 two-point attempts, a feat that left Shulman marveling at KU's defense.

"Defensively, they are phenomenal," Shulman said. "You can't get a look inside, everybody's out in the passing lane and then Releford's putting gigantic heat on the ball and it's not a lot of fun, offensively. I'd just assume they have the ball."

First off, congrats to Cobb on a great game. He made some very difficult shots (and some that were almost to easy). Here are my thoughts on the starting 5.

B Mac is an absolute athlete. The kid can be special. 3 point shot-check Mid Range shot-check Highlight reel-check Creating his own shot off the dribble- remains to be seen. If he can get this down, he goes from a first round pick to top 10. But he needs to ball in his hands, our offense needs to run through him. Ej, from now on he should be banished from shooting the three until the 2nd half. It seems he never its the first half ones then suddenly drains it in the second half. Gotta start driving earlier in the games and become a better distributor T Rel- I figured by now he would have accidently hit a three. They aren't falling, so move up and take the easier shot or play your game and dive to the hoop. Great defense, keep it up. Withey-Same thing with EJ, gotta start off better. Take smart shots and become the rim protector the whole game, not just the 2nd half. Ellis- Don't think to hard. Needs to take what they give him

Congrats to Cobb for playing a good first half.

Congrats to Travis for cleaning up EJ's mess.

I don't know what happens to Johnson. He gets rave reviews from many. Don't they watch how he fouls up? He has never been that good defensively, but also not as bad as last night. Point guards go around him rather easily on the dribble. He gave Cobb, who played a super game in the first half, too much room to shoot, but I guess he was protecting against dribble penetration. Tharp has trouble defensively as well. Can either of the Whites play point?

With the exception of McLemore we don't have a well rounded player. I wish the announcers would stop talking about him staying only one year. He is very good but not NBA ready.

Withey and Releford are defensive giants, Releford especially and Withey when he wants to be. I wish the referees would help Ellis. They let the other teams push him all over the court. On free throws they shove him under the basket. He could be a really good player but as is he is neutralized by thuggery. He needs to practice one on one against Traylor.

Our really weak point, besides lack of aggression, is point guard. JB what can be done???

What are you talking about? White is their last names. So I'm dark skinned. So what?

Are you sure he is talking about my comment? If so, maybe pill41 is offended by being called White. Sorry.

"Defensively, they are phenomenal," Shulman said. "You can't get a look inside, everybody's out in the passing lane and then Releford's putting gigantic heat on the ball and it's not a lot of fun, offensively. I'd just assume they have the ball."

That was going to be my exact comment. Definitely "just as soon."

Marchello, Farad, Frankemeshh(or whatever his name was)....need to guard guys with odd names closer. I'm sure it is a 3 point shooting conspiracy.