Opinion: Perry Ellis will get the hang of banging

Kansas forward Perry Ellis looks to pass around Michigan State center Adreian Payne during the first half, Tuesday, Nov. 13, 2012 at the Georgia Dome in Atlanta. 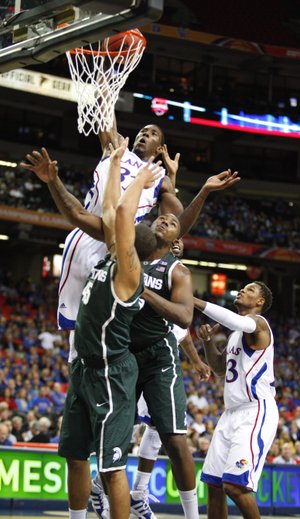 Atlanta — Dribbling left from the right wide post, completely under control as if playing another high school game en route to his four consecutive Kansas state championships, Kansas University forward Perry Ellis ever-so-smoothly executed a spin move and went in for an easy bucket on the right side of the hoop early in the opening minutes.

Rare is the freshman who can make such a smooth move on such a big stage against such a good team. Michigan State, a perennial powerhouse that bruises its way to Big Ten championships and Final Four runs under feisty coach Tom Izzo, won the game, 67-64, Tuesday night.

As the opener of a heavyweight doubleheader in the Georgia Dome progressed, the reality that playing college basketball in the paint requires so much more than skill settled in on Ellis, who watched more of the game than he played. That won’t happen often during his Kansas career.

On consecutive possessions late, Ellis missed a close shot when he didn’t go up strong and appeared to avoid contact instinctively and then on the perimeter picked up his dribble prematurely, looked a little confused when searching for someone to pass the ball to and turned it over.

Those plays spelled the end of Ellis’ day with 3:32 remaining. He played 17 minutes, scored four first-half points, had three rebounds and didn’t defend the paint the way he will when he becomes used to facing far bigger and more physical players than he competed against at Wichita Heights High and in AAU ball.

Ellis never will become a banger who sends opponents home with bruises and welts, but he will make strides in absorbing and welcoming contact because KU coach Bill Self has a way of bringing that out in players. Ellis presents a challenge in that regard, but so have others through the years. Ellis will get the hang of it, just as they did.

Ellis already was winning state championships when KU red-shirt freshman Jamari Traylor took up the game seriously. Traylor, whose one-handed follow jam topped KU’s highlights, can’t approach Ellis in terms of basketball skill. But the muscular, explosive freshman from Chicago who practiced but was restricted from playing for KU during the second semester last season was more ready for this type of physical basketball game and played 25 minutes off the bench.

“I thought Jamari was much more aggressive,” Self said. “Perry’s going to be a good player, but everything’s a finesse deal right now. And it’s not his fault. Michigan State’s not the best team to be finesse with.”

And then there is the most talented member of the team. Red-shirt freshman Ben McLemore blends a soft shooting touch with kiss-the-Dome-ceiling athleticism, but in a different way than Ellis, must become more assertive.

“He needs to figure out how to put himself in the game where he’s more of an impact guy,” Self said of McLemore, who scored 14 points and made five of seven field-goal attempts. “The guy’s a pretty efficient player, but seven shots is not enough for him. He’s so talented, but he’s got a lot to learn. It’s going to take awhile, but he’ll get it. ... I thought Ben was pretty good early. He lost all aggressiveness late.”

The three freshmen in Self’s rotation didn’t come to KU with eyes that had seen so much, so young, such as, say, Sherron Collins, for example, so they present a different challenge for the coach.

“We’ve got a long ways to go with competing and understanding how to compete and being tougher mentally and that kind of stuff,” Self said. “It’s new to them. Our freshmen are pretty good, but they’re green and naive. They’re not the typical heralded freshmen that have had a lot of exposure and are worldly. They’ve been pretty sheltered as far as experiences, so this will be a great learning experience for them.”

Ellis particularly learned the hard way, from a seat on the bench for much of it, playing for the side that came up short. That’s new to him, too.

“I’m sure he was down on himself,” senior Travis Releford said of Ellis. “But it’s a learning experience. He’s never been in this pressure situation, this type of atmosphere, this big of a game. It’s just something we need to keep working on.”

Ellis has an abundance of basketball talent. He cares, and he’s smart. Some day he’ll look back on Tuesday night and feel proud of how far he has put it in his rear-view mirror.

Perry is going to be a great player inside.He did look nervous tonight but it was a great learning experience against a very physical MSU team. By the time January rolls around he will relieve a lot of the pressure big Jeff saw tonight.

Jamari also played great tonight. His energy on every play was reminiscent of TRob and has to be all over Sportscenter.

Perry and Jamari are going to be a good 1-2 punch at the 4 position for at least this year and next, but do we need to add another next year?

Count me as one who is consistently preturbed at the amount of lay-ups we typically miss...this has been going on for years now. MSU's freshman managed to make his.

It happens to everyone. You just don't notice it when it happens to the other team because, like the rest of us, you are wearing KU colored glasses.

Perry's not the only one who needs to get used to banging. Withey needs to get banging more, be stronger to the basket.

Everyone needs to learn how to bang efficiently. Banging comes naturally to some, but others struggle to bang on a nightly basis.

On another note, I've never seen so many commas in such a short space: "so much, so young, such as, say, Sherron Collins, for example,"

You've gotta be kidding me. How does this pass the editors? Oh wait, Keegan is the editor. Nevermind.

This was the first time I ever thought a Self team looked soft...WOW....Ellis looked nervous, scared, etc. Keegan, didn't read your article, title is enough to make Perry humiliated for his KU career.

Aaaaaand we have a winner.

Ellis is, well, under-strong. He will get stronger, add musle, kick booty and take names in the next few years as a Jayhawk. Confidence will definitely come.

Yes, at times he lacked strength, confidence, and poise. He seems like such a smart, coachable kid - and still much more polished than most freshmen.

I don't think we'll be too anxious about Ellis' early departure until next season. It'll be fun to watch!

if you miss a "bunny" does that mean you laid an Easter egg?

Lots of people have compared Perry to Brandon Rush(including Self). Brandon never liked contact and only took it on when Self yelled at him until he was red in the face. I saw it at the Florida game in Vegas. Hopefully this won't be the case with Perry. Of course he probably won't have the same type of "hobbies" that Brandon had(still has).

I didn't know those "hobbies" contributed to the lack of desire for contact. Pretty weird.

"Perry Ellis will get the hang of banging". Sounds like something that could get the kid in trouble.

OPPONENT CLASSIFICATION: Cupcake. Mocs are either a low mid major or a low major, depending on how your preferred nomenclature.

WHY PLAY UTC?: UTC Coach John Schulman is a former assistant of Jeff Lebo at both Tennessee Tech and then UTC, where became head coach, when Lebo went on to Auburn. Jeff Lebo played for Dean Smith at UNC. Jeff also spent a year with San Antonio. We can therefore see some links to KU. I find no direct Okie Baller link. But Schulman appears a "right way" guy who almost got S-Canned at the end of last season and is probably in jeopardy this season. So: KU needs a tune up game. UTC gives a tune-up game. Self helps Schulman stay in the AD's good graces by bringing an AFH sized gate sharing check.

OVERVIEW: Classic low major with a roster full of 6-1 to 6-7 players, no centers, and three forwards playing three "bigs" weighing in at 238-245, which sounds somewhat close to SEMSU. Schulman played 11 guys 10 or more minutes, 8 of those 15 minutes or more, so we're looking at a coach that likes to play two strings. There trey shooting appears weak. They scoring efficiency inside is low 40s. They made 68% of their FTs, which is not too hot. The outrebounded their opponent 2:1, had half as many TOs, and almost 3 times more steals. They don't try to block shots.

PLAYING STYLE: 25/75 split on treys/FGAs. Likely will shoot more treys against KU. But will go inside and shove and crowd our guys, if we let them. Like to get up and down the floor, disrupt and get on the offensive glass.

MARGIN OF VICTORY: BLOW OUT.

RISK FACTOR: Only a let down of epic proportions, which seems highly unlikely.

what is wrong with you

Umm will the Journal World ever realize that Keegan is just embarrassing them?

Which in turn made SI.com hot clicks http://sportsillustrated.cnn.com/2012/extramustard/hotclicks/11/14/marlins-blue-jays-2013-season-odds-tiffany-toth/index.html?eref=sihp&sct=hp_bf1_a3

Headlines to look for this season (or not):

Johnson Hard on himself

Withey no longer soft in the middle

Remember the movie One on One? ( Robby Benson) They used a football player type to toughen him up by beating the daylights out of him. If we'd schedule Michigan State 2-3 more times, it will do the trick.