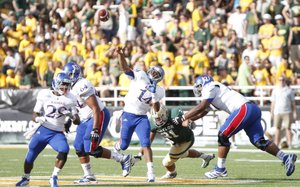 Running back Lache Seastrunk described Baylor’s 41-14 victory over Kansas University on Saturday in a similar way.

“It’s like the monkey jumped off our back — like we had Sasquatch sitting on us, and (he) wouldn’t let us breathe,” the sophomore back said. “It felt really good to get the win.”

“Just a tremendous relief, quite honestly,” BU coach Art Briles said. “We’ve felt like we’ve been carrying a burden the last three or four weeks. It’s a relief to get out there and really play well as a football team.”

Briles even was able to crack a smile a few times in the postgame news conference.

“It’s the first time I’ve felt good in a month. All of our guys are going to feel good,” Briles said. “I wish I was being funny, but it just gives you a good feeling. That’s so important.”

Baylor’s victory over Kansas came with some impressive numbers.

After going the first seven games without a 100-yard rusher, the Bears had two against KU: Glasco Martin (157) and Seastrunk (103).

BU also finished with 666 yards on 91 plays — the fourth time this season the team eclipsed 600 yards.

“We were a determined team tonight,” Florence said. “You could see that.”

Another key was turnovers. BU picked off two KU passes while not turning it over, continuing a season-long trend of playing well with a positive turnover differential.

“That’s what you have to do,” Briles said. “Nick did a great job of protecting the ball tonight, and then we got some takeaways. Those both were huge.”

BU, which improved to 6-0 all-time against KU in Waco, needs to win two of its final four games to make a bowl game for the third consecutive year — something that’s never happened in the Bears history.

“We’d love for this to take off and go,” Briles said. “You’ve got to get one (conference win) before you can get two, and we got one tonight.”