Kansas University catcher James Stanfield, left, and pitcher Frank Duncan, celebrate a game-ending double play to give the Jayhawks a 1-0 win over Missouri on Thursday, May 17, 2012, at Hoglund Ballpark.

When the starting pitcher throws a complete-game shutout, it can be pretty difficult to upstage him.

In the top of the ninth, with KU leading, 1-0, and the Tigers sitting with runners at first and second and one out, Dreiling’s stab, step and throw of Dane Opel’s rocket from behind the bag at third preserved the victory and set off a wild celebration. 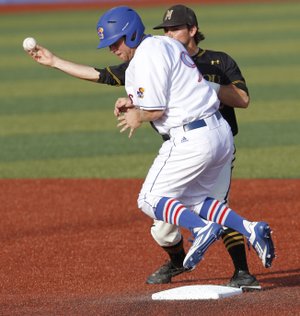 “I’ll tell you what, that’s one of the best plays I’ve seen, maybe in the 10 years I’ve been here,” KU coach Ritch Price said. “What a great play. Both guys might have scored. That’s how big-time that effort was.”

Dreiling’s game-ending double play did not completely surpass the latest strong effort from team ace Frank Duncan, who pitched nine innings and gave up just seven hits and one walk while striking out five. Instead, it made it mean something.

“When Frank pitches a special game like that, you just want to do everything you can behind him to give him the win,” Dreiling said.

Duncan, who improved to 6-7, had similarly kind words for the play made by Dreiling, who entered the game in the top of the eighth as a defensive replacement for senior Zac Elgie.

“The defense behind me was unbelievable,” said Duncan when asked about Dreiling’s gem. “I threw the pitch, looked over and saw him jump, and it was like slow motion. It was a great way to end the game.”

“I was in a full-out sprint going down the line,” Suiter said, admitting that he anticipated the ball getting through. “Give JD props for that one. He did his job over there.”

So, too, did Duncan, who cruised early and battled late. After giving up just one hit in four innings, Duncan faded in the later innings. But he never let the hard-hit balls get to him and just kept finding a way to get out of jams. In the seventh, KU’s defense turned a picture-perfect 6-4-3 double play to end the inning. In the top of the eighth, Missouri’s threat was put to bed when KU catcher James Stanfield threw out Mizzou center fielder Brannon Champagne on an attempted steal of second base.

“That gave us a chance to finally find a hole somewhere, and somebody hit a ball hard,” Price said.

That somebody was Suiter in the bottom of the seventh. After Elgie singled to lead off the inning and moved to third on a sacrifice bunt by Dakota Smith and a groundout by Jake Marasco, Suiter ripped a ball to the gap in left-center field. The line drive one-hopped the wall and easily allowed Elgie to score the game’s only run.

Suiter nearly scored KU’s second run when second baseman Ka’iana Eldredge followed with a single, but Champagne’s perfect throw to home plate beat Suiter by inches. Price left the KU dugout to argue the call, but said he was not debating whether Suiter was safe or out.

“If he slides feet first, he’s clearly safe,” said Price, noting that Suiter made a mistake by going in head first. “But you’re not supposed to be able to block home plate, and the thing the umpire explained to me was (Mizzou catcher Ben Turner) was in the act of receiving the ball, and if you’re in the act of receiving the ball, it allows you to continue your motion, and you can end up being in position to block the base.”

Although the call was big at the time, it mattered not in the end. All that mattered was that KU’s ace delivered when the Jayhawks needed it most.

“The starts keep getting bigger and bigger every time out, and tonight was one of the biggest ones of the season,” Duncan said. “You can’t say enough about how big of a win this is.”

“Their guy was good, our guy was good, it was a great college baseball game,” he said. “We’ve been preaching to these guys that you have to win to get in, and I want them to have to earn the right to go to Oklahoma. To find a way to win the opening game of a great series puts you in the driver’s seat. Now we gotta find a way to close it.”

KU’s victory, along with Kansas State’s 7-5 victory over Texas Tech, vaulted the Jayhawks (21-31 overall, 6-15 Big 12) into seventh place in the Big 12 by a half a game over both KSU and Texas Tech, which sit at 6-16 in conference play. The Jayhawks need one more victory against Missouri to guarantee a spot in next week’s Big 12 tournament.

Missouri baseball is going to get worked over in the SEC, Rock Chalk Jayhawk!

Way to go Hawks!!! Got the first one, now let's go out there and battle and get the next one Friday night. Find a way, and make it happen! Rock Chalk!

Great win, and this next one is the key. We need another strong start from Benjamin (i assume he's the second day pitcher). Let's just sweep the Tiggers away for the final taste of the rivalry.....a rivalry that they wanted to go away.

So where did the missing game go? I just went through the season schedule to double-check, and by my count we should have had a 5-16 conference record coming into this series. Not that I mind having a slight advantage of it, but still curious nonetheless.

Well then that bookends it. First ever athletic event against Mizzou was in football, 1891. KU beat MU and went undefeated that year, 7-0---don't know the score of the game unfortunately.

With this baseball series victory ending any affiliation with Mizzou, all that's left is Mizzou crying over spilled Meth and bringing their bookended soggy tissues to the SEC so they can play a bunch of teams that could care less about Mizzou's books, a school that just got bookended 121 years later by their only hated rival!