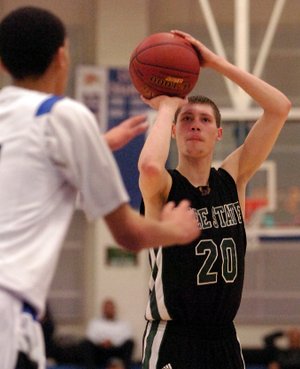 Free State's Tyler Self pulls back for a three pointer as the Firebirds played Leavenworth in first round of sub-state Thursday, March 1, 2012, at Leavenworth.

Tyler Self remembers exchanging thoughts with Bill Self, Kansas University’s ninth-year coach, during one of their fairly common father-son basketball rap sessions, not long after the release of the preseason college basketball polls.

The Jayhawks were picked in the top 15, but were not everyone’s pick to win their eighth consecutive Big 12 championship. Tyler, then on the cusp of entering his senior season on Free State High’s basketball team, thought that was crazy. The coach thought his son was the wrong-headed one.

“There were definitely times where we were talking about if we could win the Big 12 and all these analysts were picking us third, fourth, sometimes fifth,” Tyler recalled shortly after KU’s 80-67 victory over North Carolina in the Elite Eight last Sunday. “I was like, ‘There’s no way we won’t win the league,’ and he’d just look at me like I was crazy. But, at the same time, I think in the back of his mind he knew we’d definitely have a shot to win the league and do something special. I just don’t think he wanted to be up front about it just because the team had so much growing to do and so much to prove.”

That approach is classic Bill Self, never more evident than this season. Rather than fielding a team full of first-round picks and McDonald’s All-Americans, Self started with a squad that had just one proven player in senior point guard Tyshawn Taylor. Fast forward five months and there Self was in St. Louis cutting down the nets after reaching his second Final Four.

A question that surfaced months earlier intensified the night KU earned a trip to New Orleans: Was this Self’s best coaching job?

Tyler said his dad’s most recent achievement ranked with the best because this run to the Final Four came as such a surprise. In 2008, when Self won the national title, father and son shared high expectations.

“I don’t think it’s really that he thinks they will always be good because of him,” Tyler said. “But I think he sees how everything will all mesh together at some point to make them pretty dang good. I think he knows the game just about the best in the nation, but it’s not only that, he also created a family atmosphere. The guys are playing for each other, which doesn’t always happen, and he just got them believing that they are good.”

Barry Hinson, KU’s director of basketball operations who this week accepted a job as Southern Illinois’ head coach, has known Self for 30 years. He said his boss’ ability to churn out such consistent efforts from such different teams reveals his greatest strength.

And that’s what his players love so much about him. No matter who they are or where they’re from, Self finds a way to relate to each one. Whether it’s fifth-year senior Conner Teahan or first-year reserve Naadir Tharpe, the one thing they all have come to understand about their head coach is he is who he is and he’s not going to change.

“I want to say I’m proud of coach Self, but that’s kind of hard to say because this is something that I think coach Self just does,” junior guard Elijah Johnson said. “I think people are blind to that. People underestimate him so much, and they don’t realize that he’s a winner. He’s gonna win. You might get him once, you might get him twice, but he’s gonna get you 90 percent of the time.”

Asked if they recognized anything different from Self this season, the Jayhawks struggled to think of much. Junior center Jeff Withey said the coach showed a little more patience.

Tharpe shared that the upperclassmen told him they never had an easier winter break. Teahan said he felt like Self truly coached this group more than any he remembered.

And then there was Taylor, the four-year starter who in so many ways had become an extension of Self on the court: Cold-blooded competitor. Infectious smile. Heart of gold. Winner.

“I think he kind of took this year as a challenge to himself and said, ‘This is a team that probably isn’t gonna be as good as my other teams, but I like these guys because they’re gonna buy in and they’re gonna want to learn and want to be coached and this is when I can actually show who I am,’” Taylor said of his coach. “I think he’s done a great job, and I’m so proud of him that he stuck by me and stuck by this team. We’re this far because of our coaching staff, starting with him.”

“Like any other coach, he yells, he screams, he gets on our nerves, but I couldn’t imagine having his job because we gotta deal with one of him, but he has to deal with 15 of us,” Taylor continued. “I would go crazy. I would lose it. He’s done a great job with us. He got all of us to buy into his system and he did it in a way where we had fun doing it. I’m so grateful to have played for such a great coach. I’m pretty sure he’s gonna be in the Hall of Fame one of these days, and I’ve been lucky to learn so much and to play under him.”

I really enjoyed the article, Matt! Great inside stuff on their relationship from the player's perspective(s)! Great job! Rock Chalk, Jayhawks!!

yea, Matt. keep it coming. we don't need to know stinky Kenfarty dramas in kusports. i love this website!

I ain't hatin', but your bracket blows, dude!

yeah, i've said this many times. i like us the underdogs - i didn't expect us to go this far. surprise, surprise! it's a great feeling now. i don't mind the low score. high score, low score, it wouldn't have effected how our team plays anywaays. :)

Ya gotta have a bracket to trash a bracket. Don't see one.

Taylors comments bring a tear to my eye...

Self keeps getting a little better at everything every day.

He is a work in progress.

Win or lose today he is going to get up tomorrow and keep getting better at everything he can think of.

Few can see how much there is to get better at.

Most see what cannot be done.

Few can see how much better one can become by getting better every day.

Most see what cannot be done and quit trying to get better at what can be gotten better at.

It turns out God is not in the details.

God is in the getting better at every detail you can every day.

Its a crucial distinction.

The players get it.

But if you and your team get better at more important things than the other teams, and you compete ferociously with patience, and you believe, and you make big plays, you beat those that didn't get better and couldn't last a moment longer.

Hype or no hype.

Bill Self's greatest challenge as head coach may be the need to replace part or all of his staff after this season. There could be some very big shoes to fill regarding not only coaching abilities but even more importantly, recruiting.

This is, of course, a positive for the prestige of Kansas Men's basketball and its coaching legacy to have Bill's assistants hired as head coaches at other schools.

jb, if you are clocking West Coast time this a.m., you are on 24 hour alert for this big day!

"He’s gonna win. You might get him once, you might get him twice, but he’s gonna get you 90 percent of the time.” What a classic comment from EJ. That's awesome, and at the same time, so true.

Actually, I think Tyshawn is overstating the case – He' really only going to get you about 86% of the time.

Great article, Matt! It shows the great chemistry between Coach Self and the players, which is a big key to their success.

Finally an article discussing the relationship for real between coach and the players. Great job!

Such a nice article to start the day. Rock Chalk!

Can't recall if it was just before or after boot camp I posted this would be Bill's greatest coaching challenge since his first years at ORU. Not profound at all, obvious to most for sure, and right on target strait as an arrow. Who would've believed if we'd called out this shot to be playing today? Yet I really think they've got another W left for OSU, I like their chances in this matchup. Primed & ready to toss it up now, but still waiting for L'ville to knock Cal & co off the pedestal. That's the omen for sure. Go Hawks!

I've missed any rumors about Tyler Self's college choices. Anybody know anything?

Will he walk on?

Were you peaking when I picked my bracket? : )

He may have peeked, but neither of you were too far from peaking.

I would imagine Tulsa took a pretty big jump this week, and maybe SIU as well . . .

And Frank Haith get's the AP Coach of the year honors??? What's up with that?

How many more minutes till the game starts! : )

The last paragraph says it all. My God Taylor has really grown up his senior year into not only a great player but a wonderful young man. Win or lose this team is very special and I will remember it for a long time. Go Hawks and get two more!!!

I read articles like this and then see that players like Muhammad are not interested in being Jayhawks and it tells me volumes about the kid and other players who would rather play for someone like JC (and that doesn't stand for Jesus Christ). It is sad that they cannot see what we see, that HCBS is a genuinely great person AND a great Coach. Guess being a great person just isn't important to some kids.

When recruiting the so-called "top prospects", I'd want to ask each of them one question and then listen really close to their answer:

"How much better do you need to become, and how much work will it take for you to get there."

There haven't been any who HCBS needed on his team more than they needed the experience of being on his team. Some of them understand this, but most don't and wouldn't believe if it were explained to them.

The best fifty players in this senior class (whether or not they are pros) includes only about a third of Rival's top50 from 2008.

Sorry for the missing ?

I need to get better, and am just not working hard enough at it.

Statements of the obvious:

1] Farrah Fawcett was beautiful. 2] Lemon meringue pie is delicious. 3] The Titanic could have been steered better. 4] Gravity works in almost every part of the world. 5] Poker is not a sport. 6] The Three Stooges are the funniest or dumbest group ever. 7] Allen Fieldhouse is a nice place to watch a basketball game. 8] Caddyshack is a classic movie. 9] Bill Self can coach.