Kansas guard Travis Releford is seen on the LCD screen of a television camera during an interview at the Superdome in New Orleans on Thursday, March 29, 2012. 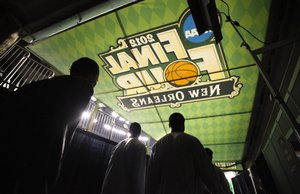 New Orleans — Kansas University guard Elijah Johnson has felt like royalty since Sunday, the day the Jayhawks defeated North Carolina in St. Louis and punched their ticket to the Final Four.

“I’ve never felt like I had a red carpet laid out for me in my life. The experience is fun,” Johnson, KU’s 6-foot-4 junior out of Las Vegas, said Thursday at a news conference in the Superdome. “I’m enjoying it, but we are down here to play ball.”

KU’s five starters each held court in their own interview room, where they fielded a barrage of questions for 20 minutes. The Jayhawks practiced for an hour and a half after finishing with the media.

Johnson was asked about his clutch three-pointer that boosted a narrow one-point lead to four during crunch time against the Tar Heels.

“After the shot, I didn’t think I was a hero. I shot the ball. I knew I could make it. Our fan base, coaches and teammates saw something I couldn’t see. It was a big shot to them. They wanted to tell me how big they thought it was. I still don’t see it as a big shot because it’s something I can do, make that shot.”

“I just want to do my part. I want to see how far we can go,” Johnson said. “In a week, this team will never be together again. We won’t be in the locker room. We won’t be ready to get on a plane. We won’t be talking to media. We won’t go on the road. I think it’s motivating us to keep going.

Self honored: KU coach Bill Self was presented with the 2012 Adolph Rupp Cup by the Commonwealth Athletic Club of Kentucky on Thursday at the New Orleans Marriott. KU associate AD Jim Marchiony accepted the award on behalf of Self, who had coaching responsibilities. The Rupp Cup is awarded by the Commonwealth Athletic Club of Kentucky, a non-profit organization established in 1972 by players and associates of former coach Adolph Rupp.

Support: Johnson pulled his hood over his head while walking past a group of reporters into the locker room Thursday at the Superdome. He was asked if he was trying to make a statement, apparently in support of the family of Trayvon Martin, a 17-year-old high school student who was shot and killed on Feb. 26 in Sanford, Fla. LeBron James and the Miami Heat recently wore hooded sweatshirts in honor of Martin.

“I’m not here to promote that. I’m here to play ball, but I guess you could say that was (in support),” Johnson said.

Johnson on senior guard Tyshawn Taylor: “Tyshawn needs to be let off the leash. You can’t try to tame Tyshawn. You’ve got to let him have fun, and that’s when you get the best from Ty. I think that Ty’s having the most fun since he’s had since he’s been at Kansas right now, and I think it’s showing in his game. Just let him be free and do what’s on his mind, and he’ll come out with something positive. I think coach agrees with that, and I think that’s why he’s let Tyshawn loose.”

Thomas Robinson on his experience in New Orleans: “It’s a little overwhelming. You get here, and there is a band, and people hand out beads. It’s exciting to be here. You have to cherish this moment. At the same time, you can’t lose focus. We have been taking pictures all day.”

Taylor on reaching the Final Four: “It has been a long season. I am so excited to be here. I wish we could put aside all this stuff and go play, since that is what I want to do. Getting here yesterday was kind of what opened my eyes. This is really the Final Four. Of all the college teams that play basketball, there are only four left, and we are one of them.”

Travis Releford on the Final Four: “This week has been busy. We’ve been preparing and practicing. We all talked to (Conner) Teahan because he’s the only one on the team that has been through the situation. He’s telling us all the stuff we’ve had to go through and all the stuff we are going to have to do. So far it hasn’t been bad, but this is just the start. So far it’s lived up to what I’ve heard.”

Book signing: Former KU guard Tyrel Reed will be at the Nebraska Furniture Mart (1601 Village West Parkway, Kansas City, Kan.) from 11 a.m. to 1 p.m. Saturday to sign copies of his book, “Reed All About It.” Reed played basketball for a pro team in Belgium first semester before returning to the U.S. to complete his studies in physical therapy.

obviously, EJ doesn't have a problem with depth perception. he's always got his shoes on, for sure. no fear. yes good!

I absolutely LOVE how this phenom is being overlooked...he is the one that is our pure x-factor. If this kid hit all his shots, we win...bottom line!

It would be perfectly appropriate if he's this year's Mario and hits the shot to beat Calipari, with the only exception being that this time it wins the game instead of tying it. (Then again, I'm not sure if my herart could take another game like that one.)

Is anyone else irritated by the fact that they NEVER show Mario's shot? I mean, I know that it only tied the game, but it was still an incredible shot in a huge situation, and you would think that they would at least OCCASIONALLY show it. I imagine that if it is KU against UK they would have to show it to celebrate the return of Self vs. Calipari.

I'm more irritated that Sherron's steal and 3 that gave me (and probably most Jayhawk fans) hope that KU could complete the comeback. Without that play, it is most unlikely Chalmers gets the chance for his iconic moment.

I will always remember this play. http://www.youtube.com/watch?v=h8CEP7bxNwM

EJ. will be an all-american next year. EJ will get the red carpet again. He is probably the most savy baller on the team. He tells people he played basketball in LV but was baptized in it while growing up as a kid in Indiana

Next years line up

However the lineup eventually falls into natural order next season, with BIll Self at the helm, we should engage in another run for a league title. Hopefully, 3 starters returning, with backup KY a seasoned veteran. I look to see a noteworthy big man coach soon in place. Speaking of new assistants, one of these years Kirk Hinrich should make an outstanding guard coach, if he should choose to take up that line of work. Late in his playing career, one of his chief responsibilities has been to help develop the likes of Derrick Rose and John Wall, in their adjustment to NBA ball. I envision his sitting on a bench beside Roy or Bill or Danny, Turgeon or Boyle or Brown or Walters; biding his time until a head job opens for him, just as it has for Manning. Collison, too, might occupy one of those collegiate benches before too long.

Looking forward to more of the same from EJ this weekend and next year.

By the way, CBS has been showing Mario's 3-pointer a lot. You just have to look fast.

It's part of the montage they've been using for the "March Madness" opening of the broadcast that includes other memorable tournament moments, like Laettner's turn-around shot and Jordan's game winner. The montage ends with Mario raising his arms in triumph.

I could go for a repeat of that outcome. (Minus the cardiac finish, of course.)

So, Tyrel will be having a book signing from 11 to 1pm Saturday. Hmm.....he could have set up a table at AFH later in the day and probably would see 20x more people than at the Nebraska Furniture Mart in KCKS!