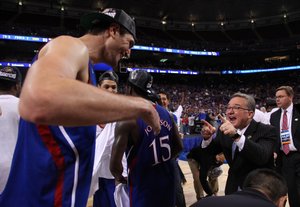 Kansas center Jeff Withey celebrates with director of basketball operations Barry Hinson after the Jayhawks' 80-67 win over North Carolina to advance to the Final Four on Sunday, March 25, 2012 at the Edward Jones Dome in St. Louis.

“We are all so happy for Barry. The last four years, we’ve had a guy that has been a huge asset to our program,” KU coach Bill Self said Wednesday night. “Everyone within the university and department has enjoyed him being here so much, but his goal was always to get back on the sidelines as a head coach. What a great opportunity that Southern Illinois has presented to him. I know there is not one guy in America that is more proud or will work harder representing Southern Illinois University the way Barry Hinson will.

“For a head coach of 11 years (two at Oral Roberts) to come in and sacrifice and do what he’s done for our program and the next thing you know, he’s a head coach overnight, I’m so excited for him,” Self added.

Hinson signed a five-year, nearly $1.5 million contract with a school that finished this season 8-23. SIU has had three losing seasons in the past four.

“What we’re going to be able to accomplish is going to be spectacular,” Hinson, 50, said.

Hinson and Self said Wednesday that Hinson would only be working for KU until the end of this season.

“I’m gonna work for the University of Kansas until Monday night at 11 o’clock, if that’s OK with you,” Hinson said with a smile.

Hinson was fired by Missouri State in 2008 after he failed to take that program to the NCAA Tournament in nine seasons, during which time he guided Missouri State to a 169-117 mark.

At Missouri State, Hinson had consecutive 22-win seasons in 2005-06 and 2006-07, but the lack of NCAA Tournament invitations may have cost him his job.

“I’m genuinely excited to be the head coach at a university with a great tradition in college basketball, and even more excited to be part of a community which seems so much like the place where I was raised,” said Hinson, a native of Marlow, Okla.

He arrived in New Orleans about 9 p.m., traveling to town on his own, not in the Jayhawk traveling party.

Leaving no doubt where his loyalties lie this weekend, he told the Journal-World: “Now let’s win the next two this weekend.”

Noted SIU AD Mario Moccia: “Barry Hinson comes from a great tradition, has an excellent record of graduating his student-athletes, winning games and is currently on staff with the University of Kansas, which will be playing in the Final Four this weekend. We are so pleased to welcome him as our new head coach.”

Congrats to Coach Hinson! You will represent Jayhawk Nation well at SIU!

what the hell!! this team doesnt need distractions like this! couldnt it have waited till after the season??? poor management on this.there is a reason danny and tulsa havent said anything yet. c'mon man!

Um...Danny and Tulsa have indeed said something.

You're right. The world should stand still for KU basketball. The assistant coaches should let opportunities pass them by. Other universities should wait on KU even if it means Hinson's potential assistant coaches take jobs elsewhere. Get a grip.

I actually agree with jayhawkcole on this one. I'm not naive enough to think the world should revolve around KU basketball, but these schools could use a lesson in subtlety. Let Manning and Hinson interview and if they want to accept the jobs, that is great for them and their families moving forward.

However, have some respect for the teams they are STILL with and what they are trying to accomplish at the Final Four. Would it kill them to wait until next Tuesday to formerly announce this stuff??

To be expected. When you have a successful program other schools want your assistants.

Good luck, Coach Hinson, and thank you for your contributions to Kansas basketball.

I believe I read in another report that Coach Self requested that the schools get things finalized before the weekend. I can also report that many of us here in the Springfield area wish Coach Hinson was still here.