During his first few months in town, Kansas University football coach Charlie Weis made it clear that he was a big fan of college basketball. So toss him into the group of Jayhawks ecstatic about KU coach Bill Self’s run to the Final Four.

“This has been a great month for Kansas athletics,” Weis said at a news conference Tuesday. “With the men’s hoops team going to the Final Four, how exciting is that? Kudos to coach Self and the staff and the team, and good luck.”

This weekend’s match-up with Ohio State brings a little deja vu for Weis. It was the Buckeyes who came to Allen Fieldhouse the day after Weis was introduced as KU’s new football coach, and Weis sat courtside for the showdown between top-15 teams. The Jayhawks knocked off No. 2-ranked Ohio State that day, and since that time, Weis has attended several other men’s games and has taken to the KU basketball culture. 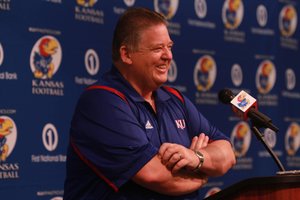 “I would love to not be the football coach on Saturday (night) about 7:40 and be hanging out on Mass Street,” Weis said. “Just watching (the downtown celebration) on video after (last week’s win against North Carolina) was pretty fun to watch. I hope there’s more fun yet to come.”

Weis also kicked off his pre-spring news conference Tuesday with some props for a pair of KU women’s teams.

“(Carolyn Davis) gets hurt, the team looks like it’s gonna go in the tank and things aren’t going very well and then they make the tournament and the next thing you know, they’re making noise, they’re doing damage and making it to the Sweet 16,” said Weis, giving props to the women’s basketball team. “And, last but not least, you can’t forget about the women’s track team, finishing second in the country (in indoor track) with two national champs. So before we even get started with football, I think it’s important to realize that football’s just one part of the big picture here.”

KU officials continue to wait for word on the status of Oklahoma transfer Justin McCay, a wide receiver from Bishop Miege High who is seeking a waiver from the NCAA that would allow him to be eligible to play for the Jayhawks this fall.

Weis said the final word on the 6-foot-2, 215-pound sophomore could come down any day.

“The caseworker in charge of Justin told us yesterday that his case is going to be presented before the caseworker leaves the office on Thursday,” Weis said. “There’s a chance we could hear something this week. Once they have all of the information, which they have, now it’s presented and they say yes or no. It’s not like they have a month-long tribunal. They hear the information and they make a decision. So I’m hoping to hear something this week, and I’m hoping for this month to continue being good.”

Although he will not be eligible to play in games this fall because of NCAA transfer rules, sophomore quarterback Jake Heaps will be used plenty this spring.

As of today, Heaps is listed as the back-up to starter Dayne Crist, and Weis said Heaps, who transferred to KU from BYU last December, was “leaps and bounds ahead of the other quarterbacks in the program.”

“It’s not close,” said Weis, referring to Heaps’ clear hold on the second-string job. “Right now, I’m using Heaps in the spring as if he’s getting ready to play. Because when we get to the summertime I can’t do that anymore.”

As of Tuesday, only two players had changed positions this offseason, and one of them was not that big of a change.

Sophomore Michael Reynolds, who played defensive end as a true freshman, officially has been moved to linebacker in KU’s new 4-3 base defense.

“In this league, you need to get fast guys that can play in space,” Weis said. “And one thing about that kid is he is very fast. I don’t know if he can play dead, but I know one thing, he can run.”

Weis said Tuesday that running back Brandon Bourbon, defensive linemen John Williams and Kevin Young and Maura all would be limited this spring. Each will participate in drills, but contact will be limited, and Weis said he did not want to rush any of them back too soon.

“Those four guys will be in red jerseys, along with the quarterbacks,” Weis said. “None of them are out for the spring.”

Weis said Bourbon, Williams and Young were “way, way ahead of where we thought they would be,” as they recover from injuries that kept them out during the final portion of last season.

Maura at S is good to hear, cause we're rather thin back there, and probably easier to get WR depth/quality.

Sad to hear that BB and KY are still nursing an injuries. Does it ever end?

Mostly love to hear Coach giving praise to the other programs and promoting the whole uni. Wonder if he watches any of the game in the Phog?

watches THE game, I assume he meant Saturdays game

“As of today, Heaps is listed as the back-up to starter Dayne Crist, and Weis said Heaps, who transferred to KU from BYU last December, was “leaps and bounds ahead of the other quarterbacks in the program.”

“It’s not close,” said Weis, referring to Heaps’ clear hold on the second-string job. “Right now, I’m using Heaps in the spring as if he’s getting ready to play. Because when we get to the summertime I can’t do that anymore.’”

Where would we be at the QB position right now if we hadn't got these two kids? We are truly blessed to have them and Coach Weis! Brilliant to get Heaps some reps and learn the system better during the spring.

I say we give Heaps two jerseys and slip him into games as needed, when no one's watching.

LOL! Pray Crist stays healthy so we don't have to seriously consider this option :-)

Don't forget about Turner Baty. The kid won a juco championship in California, and will arrive in the summer. He'll be more than fine as a back-up.

It is almost hard to comment on our current situation without being negative about the past, but I am firmly committed to looking forwards.

I will just say that I think we have a football coach. He talks like a program builder, he clearly has the qualifications given past success, and I think he creates confidence thru his competence.

Not a huge fan of the Heaps comments though, given that he can't play in 2012.

As a Houston Texans season ticket holder, I can say with total certainty that a second string qb is an extremely important element of a successful roster.

I believe what Coach Weiss meant was that it's not close between Heaps and the rest of the quarterbacks. I don't think he was making a comparison between Crist and Heaps. Maybe those aren't the comments you were referring to, though.

Best of luck this Spring, Coach Weiss. We're all looking forward to seeing the product on the field this Fall. I'm excited to support this football program under your guidance (just as soon as bball is finished).

I hope our new football transfers get the opportunity to experience some of this Final Four revelry on Mass. Just win and this community will come out and show you the same love.

KU will have a very good football team in the near future.

Don't forget, we have Turner Baty coming this summer and he is GOOD! So i don't think we need to freakout about a backup QB. It's a unique situation for JHeaps to get some reps and learn the system. Remember Dayne already knows it well.

Wow, I like Weiss' sense of community. He is being very consistent here and that should tell people he is being authentic. That will translate to recruiting success across the board but especially in the KC community. He is helping people connect with KU and that is always a good thing. The fact that he pays attention is obvious. Kudos to him.