A pair of Kansas University freshmen combined to win a dramatic 1-0 Big 12 softball battle against Oklahoma State in extra innings on Friday at Arrocha Ballpark. 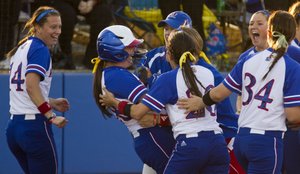 Kansas (21-5 overall, 1-3 Big 12) won its first home game of the season, and Pille shut out her seventh team this year while striking out 11. The freshman carried a no-hitter into the fifth inning and had not walked a batter until the eighth.

“We told the girls after the game that this is as proud as we’ve been of them,” KU coach Megan Smith said. “To have gone through the weekend we did last weekend and then put together what we did today against a team that was in the College World Series last year, we couldn’t be prouder of them. It was a full team effort, with a stellar pitching performance and Chanin Naudin stepping up big time. You can’t script it better than that.”

The Jayhawks and Cowgirls will rematch at 2 p.m. today at Arrocha Ballpark.

Now that's more like it! I can't wait until next years class gets here. Our soph/fresh class will be strong!

NICE!!!!! Honestly was surprised we pulled off the victory after the previous weekend. Great job ladies, very proud indeed!