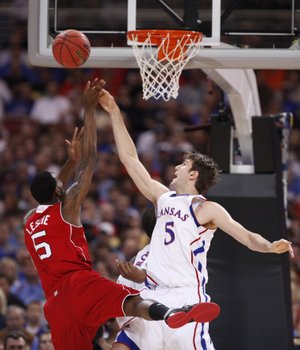 St. Louis — Thomas Robinson sat at his locker Friday night wearing the aches and pains, the bumps and bruises of another physical defense aimed at him.

He looked forward to the ice bath he would take before getting a good night’s sleep. The box score suggested Robinson was the main man in a 60-57 Kansas victory against North Carolina State. He had 18 points, 15 rebounds, two assists and two steals. But Robinson sent the credit for this one a few lockers to his right, where Jeff Withey drew a crowd.

“He was amazing, man,” Robinson said. “A lot of people give credit to John Henson. I take nothing from him, Henson’s a good shot blocker, but I think Jeff deserves credit also.”

North Carolina State’s 13-3 lead could have been much bigger if not for Withey blocking a shot on the second, third and fourth Wolfpack possessions.

“When I found out he had seven at halftime, I told him to try to get a triple-double, try to break Cole’s record,” Robinson said.

Withey matched him with 10 blocked shots, including the game-saver with 20 seconds left.

The victory came after a 63-60 squeaker against Purdue. Suddenly, the fast Jayhawks have turned into a Big Ten team, winning ugly.

“Defense wins championships, and coach has been telling us that all this year,” Robinson said. “We’re not the most talented team around, so we can’t rely on scoring like the previous years, so we’ve got to strap up.”

KU’s shooting stats read like those of a team on the wrong end of a 20-point blowout: KU shot .550 from the line, .375 from the field, .071 from three. Robinson and Taylor combined to make nine of 31 field goals and six of 14 free throws.

“Tyshawn’s been in a slump,” Robinson said of Taylor, who has missed 15 of his last 16 three-point shots. “I’ve been in a slump. We could play better, but our teammates are stepping up. Our supporting cast is definitely getting better.”

Conner Teahan, driving to the hoop with good results on a night he missed all three three-pointers, and energetic Kevin Young gave the team big lifts.

Someone wondered if maybe playing in a dome had something to do with the team’s poor shooting. Robinson knew better than to take that excuse.

Taylor said Kansas coach Bill Self let the team know on Day 1 of practice the only shot it had of success was to play great defense. Friday’s game, more than any all season, proved him right. Robinson remembered Self saying that too.

“We’re not deep as we were previous years, we’re not going to win by scoring, so we’ve got to strap up on the defensive end,” Robinson said. “That’s what we’ve got to live on, and I don’t mind. We’ve had to buy into it this year. Previous years, I don’t think we bought into it as much as this year because we had players who could score at any time.”

Robinson relentlessly attacked in traffic, earning trips to the line and getting N.C. State’s bigs into foul trouble. He had very little room with which to work and missed his share of easy shots.

“The bruising and the double-teams and all that, I have to take it,” he said. “It’s part of the game. I’m not complaining about it at all. It’s part of basketball. That’s going to come with it. I’ve been in the tub a lot, and I’ll definitely do it tonight.”

The ice will help him heal. No exact prescription exists for thawing the team’s cold shooting in time for Sunday’s game against North Carolina, a game that sends the winner to the Final Four in New Orleans.

“The lid is going to come off the basket for us eventually,” Robinson said. “We probably have to come out a little better against them. Coming out slow against a team like North Carolina won’t do us too good.”