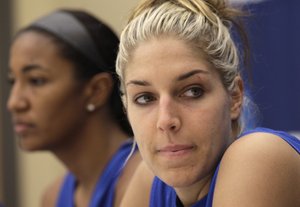 The Jayhawks hit just 25 of their 66 attempts, including a 2-for-13 effort from three-point range, and made just five of their 10 free throws while upsetting the Huskers, 57-49.

“We shot it really well in practice the day before, and that always makes me nervous,” Henrickson cracked, regarding the 38-percent shooting effort in the opening round.

While some of KU’s guards struggled to convert — sophomore CeCe Harper went 1-for-7, freshman Natalie Knight was 2-for-7, freshman Asia Boyd made two of six and junior Monica Engelman finished 0-for-5 — Henrickson wasn’t completely dismayed.

“CeCe Harper’s a better shooter than that, and then she just wouldn’t shoot it,” Henrickson said of Harper’s slow start. “So we’re all screaming ‘Drive it,’ and she finally drove it and got a layup (with 3:15 left in the game).”

The eighth-year Kansas coach, fresh off her first NCAA Tournament appearance and victory at KU, said the Jayhawks got good looks and just shot a few out of rhythm.

“This group, they don’t take bad shots,” she said. “They’re not selfish by any stretch of the imagination.”

If anything, the inefficient possessions came when someone wasn’t ready to shoot, Henrickson said, and the ball should’ve been moved elsewhere for an open teammate.

“We need to score the ball and shoot the ball better than we did (Sunday),” the coach said. “Defensively, it would be nice if we could be that good again, too.”

The Blue Hens have made 45 percent of their shots this season. Kansas averages 68.5 points and also has converted on 45 percent of its field-goal tries.

“Yeah, I feel like that is a possibility (for KU to win), and we will be excited,” Sutherland said. “It’s always exciting to play against a team that hasn’t lost a lot, and it will be our motive to beat them.”

Delaware went 18-0 in the Colonial play and in non-league games defeated teams from larger conferences, such as Penn State, Villanova, Wake Forest and Providence.

Records made to be tied

Kansas freshman forward Chelsea Gardner tied a program record for rebounds in an NCAA Tournament game with 16 against Nebraska. She also tied the single-game KU tournament record for field-goal percentage (minimum five made) by going 6-for-8 for 75 percent.

KU made the NCAA Tournament for the 12th time in program history this season … Delaware is ranked No. 7 in the nation … Kansas and Delaware have never met in women’s basketball … The Jayhawks are 2-5 all-time in second-round games.