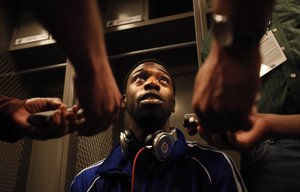 Omaha, Neb. — Word spread all the way here that back home in Lawrence people were so fired up about Missouri getting knocked out of the NCAA Tournament the city decided to hold a downtown parade Saturday and encouraged everyone to wear the color of the school that bounced the Tigers.

Is that true? Did green-clad basketball nuts really line the downtown streets, and was Norfolk State center Kyle O’Quinn really invited to be the parade’s Grand Marshal?

Amazing. And to the think the No. 15 seed Spartans didn’t get a point from their bench in upsetting Missouri. So why all the concern about Kansas University’s reserves coming into the tournament? After all, the TV timeouts are longer, and the adrenaline pumps faster to fuel stamina.

True and true, but you never know when either foul trouble can arise or a freaky physical factor can come into play, such as the leg cramps that kept Kansas senior guard Tyshawn Taylor out of all but the first couple of minutes of the second half.

A bench isn’t always important, but it’s a terrible thing not to have when it’s needed. It’s rare for Bill Self to bring so little experience and firepower off his bench as this season, but it’s trending upward, thanks to the improved play of energetic reserve Kevin Young, a junior transfer from Loyola Marymount.

“I love playing with him, man, because his intensity is always high, always high,” Taylor said. “No matter what he’s doing, he’s going 100 mph.”

“Exactly,” Taylor said. “I was just about to say, sometimes it gets him in trouble, but you can live with that when you know he’s going hard, and he’s just trying. I love it when he’s on the court with me. (Purdue) is going to be a big game for him because they play small, and he’s going to be a big part of having to guard Robbie (Hummell) and the other guys who can stretch the floor.”

Early in the season, defensive deficiencies made it difficult for Young to stay on the court. Stronger players overpowered him, quicker players beat him off the dribble.

“I’ve been trying a lot to improve on it,” Young said.

Much of the improvement comes from facing a variety of styles in practice.

The toughest guy to keep from scoring?

“Probably Thomas, just because of his strength,” Young said.

Young’s not a banger like Robinson, but he can hustle his way into position for rebounds and had a big night in KU’s tournament opener, scoring nine points and making five of six free throws.

I L O V E the way Kevin Young flies around the court, covering a lot of hardwood in just a few giant steps. Almost seems like he's a cross between a kangaroo and a cheetah the way he hops around.

Great to have your energy ripping down the court, Kevin, and your skills growth since December has be fabulous, to say the least.

I appreciate the way Kevin passes the ball. He's had a number of nice assists this year.

I really love Kevin's smile. He really enjoys the game. I am looking forward to next year and seeing more of him.

I have been impressed and happy with Keven since the first time I saw him on the floor. He had a lot of catching up to do but I think he has nearly made it and he did a pile of good for the team Friday night. His speed and quickness is always going to help, especially in transition and his passing inside is almost as good as TR's.

Do you remember the disapearing brady last year when he contributed nothing including defense. Keep playing teahan as much instead of tharpe who is quicker we will have the same result. Look at tehan everytime he is trailing his man to the hoop. What's the deal with him playing so much especially since he can't hit the 3.

This squad would have dug itself some deep holes without Conner this season. Tharpe is a work in progress with a dandy upside, but not yet savvy enough to play Teahan-type minutes for Self's Jayhawks. I have been pumped up about Naadir from the getgo, and think he will be a major contributor down the pike. But still on emergency reserve status for the remainder of this season (Hopefully, five games!). By the time he is a third year player like Elijah, Tharpe should be one of our three best players at the 1 and 2 positions.