Kansas women knock off Nebraska in first round

Kansas’ Angel Goodrich (3) passes the ball around Nebraska’s Jordan Hooper during the second half. KU won its NCAA Tournament opener, 57-49, on Sunday in Little Rock, Ark.

KU women vs. Nebraska in NCAAs 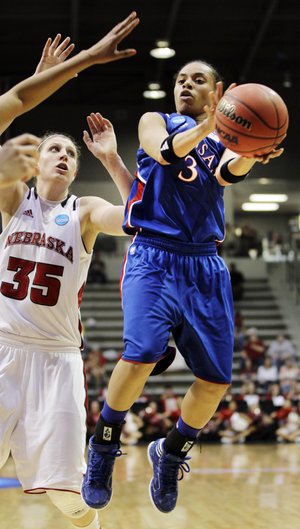 Junior forward Carolyn Davis, out for the season because of an ACL tear, pointed out to her Jayhawks teammates prior to their Sunday night first-round game against Nebraska that this is the time of year for unsung heroes.

That was the case for KU, too, as freshman forward Chelsea Gardner’s career night helped the Jayhawks upset the Huskers, 57-49, in their first tournament appearance in 12 years.

Gardner, a 6-foot-3 freshman forward thrust into the starting lineup after Davis’ injury, finished with 15 points and 16 rebounds — both career highs. Her impact wasn’t lost on KU coach Bonnie Henrickson, who related Davis’ remarks about the postseason being a chance for players to take their games to uncharted territory.

“Somebody else comes in and steps in and is a big contributor and helps the team win,” the eighth-year KU coach said following KU’s first NCAA win in her tenure.

Much of Gardner’s success came by crashing the offensive glass, where she collected eight of her boards, and Henrickson said many of those were set up by junior point guard Angel Goodrich’s ability to drive to the paint and draw away potential defensive rebounders. With Gardner leading the way, KU (20-12) out-scored Nebraska, 19-9, on second-chance points and 40-28 in the paint.

Said the De Soto, Texas, native after going 6-for-8 from the floor and 3-for-7 at the foul line in her eighth start of the season: “I didn’t buy real estate, but Bonnie told me I might have a chance tonight to just work hard under the basket and get open shots.”

Her play became crucial for Kansas once senior forward Aishah Sutherland got in foul trouble in the first half and ended up playing only 20 minutes and finishing with eight points and five boards.

“I just came out and was excited about this game,” Gardner said. “I just felt like I needed to step up more.”

Henrickson said the Jayhawks ended up running plays for Gardner, which they used to have reserved for Davis. Gardner said the injured Davis provides her with tips every chance she gets, and that proved immensely helpful against No. 6 seed Nebraska (24-9).

Goodrich, as she has become accustomed to doing, played for 39 minutes in her NCAA debut and scored 20 points to go with five assists and five rebounds. The Huskers, who never led, couldn’t keep her out of the paint, and Goodrich’s floaters and layups helped KU lead by as many as 10 points.

“It was just about being aggressive,” the junior point guard said.

The Jayhawks led by just four with less than four minutes remaining when a Goodrich miss was gathered by Gardner for two of her second-chance points. Next, CeCe Harper drove in for a layup to put KU up 48-42 with 3:13 left. The following Kansas basket came on a steal and layin by freshman guard Natalie Knight, and the Jayhawks extended their advantage to 52-44 on an up-and-under move by Sutherland in the paint with 1:44 to go.

Nebraska cut the lead to five with just more than a minute remaining, and NU guard Lindsey Moore was headed for a layin when she lost the ball off her knee, turning it over to Kansas. On the ensuing KU possession, Nebraska elected not to foul, and Goodrich scored inside off a pass from Knight, putting the Jayhawks ahead 54-47.

Goodrich then secured a defensive board on the other end following a Moore miss. She drew a foul and sank two free throws with 32 seconds remaining to seal the program’s first NCAA Tournament win since 1999.

Nebraska’s three-point shooting had been an enormous concern for the Jayhawks entering the match-up with their former Big 12 opponent, but the Huskers went just 1-for-19 from downtown, dooming their chances of advancing to the second round.

Said Nebraska coach Connie Yori: “We lost the game on our offensive end.”

Goodrich said the Jayhawks did all they could to contribute to Nebraska’s off shooting night.

“That’s what we were going into this game focusing on —getting back, finding match-ups and at least contesting the shot,” Goodrich said.

Henrickson said Nebraska had a few good looks in rhythm, but many of them were rushed. And given the way things turned out, she didn’t mind taking a light-hearted approach to what the KU defense had to do with the dismal shooting.

The Huskers made just 20 of their 61 field-goal attempts, while KU went 25-for-66 from the floor. The victory was far from pretty, but the Jayhawks’ stay in Little Rock will continue a couple more days as they prepare to face No. 3 seed Delaware (31-1), which beat Arkansas-Little Rock, 73-42 Sunday.

Shouldn't this be front page HOME news. Had to dig to find the lady hawks game results.

Not me, it was first line after main headline of men's game.

If I wake up tomorrow with my head sewn to the floor...

Snotz, you roll over and let Uncle Ahperse rub your belly! You ain't never seen a set on a dog like this one's got ahperse!

Take THAT you traitorous Bugeaters!!!

way to go hawks! disagree with all the fire bonnie people, this team has been injuries away from being very good many times. here's to being that low seed with nothing to lose, go get 'em ladies!

I am happy about the win but to be honest, I feel that 1 tournament win at KU during a tenure as long as Bonnies does not quiet the "fire Bonnie people". I am happy, but I would still let her go unless there is a major run (Elite 8 or better).

Let it go, Bonnie will improve this team next year and big things are in the future !!!!

Watched this game quite a bit to distract me from men's game. Goodrich is a player. Good tall post players and solid defense. Can possibly challenge Delaware for 30 of 40 min. EDD is too good.

Didn't see them add the time there when I was replying, my bad.

Night job ladies proud of you!!!

Well if Bonnie didn't save her job by simply making the tournament, I'd say tonight secures her for another year!

Amazing game ladies. Angel was phenomenal. Bunny did well in there, Asia, and way to go Chelsea. Thanks for a great game to watch! The men scared the #%*!? out of us!

Not a big fan of women's basketball, but extremely proud of the Lady Jayhawks for outlasting a good lady Cornhuskers team! Rock Chalk ladies! Keep it up!!! Let's go Henrickson! Always rooted for you, you are a great coach! Take us all the way Angel!!!!!!!!!!!!!!!!

Congrats Lady Hawks! You played with class under difficult circumstances and adversity. Keep it up... the Jay-hawk Nation is behind you.

Outstanding game by the women Jayhawks tonight! I just watched it on my DVR and it was impressive! Let's keep it going!

p/s: dear kusports.com, would you mind telling KU AD to spend a bit of their wealth to post each highlight of KU women's bball game? thx!

What a great night to be a Jayhawk! Congrats, ladies, and good luck against the Blue Hens. (That's the Delaware mascot, right?)

Wonderful game! Beating a good team like Nebraska should give you the confidence you can win any game! Rock Chalk!

This is gonna be a helluva test in Little Rock, and it's very cool that we have an opportunity to play against my favorite student athlete. Elena Delle Donne is a machine, possessing every offensive weapon imaginable. In case you missed it, here is a great Outside The Lines on her.

As good as she is on the court (cliche, I know) she's even better off it. I hope we can find a way to win, but if we don't I'll be rooting for Delaware the rest of the way.

Any coverage of the game we can link up to?

Careful, Bonnie...at this rate people are going to actually start to like you and want you to stay.... :)

All kidding aside, congratulations to the team and the coaching staff for turning this season, filled with lots of lemons, into a pitcher of ice cold sweet lemonade!!

The Jayhawks and LadyHawks both still playing....it's a great day to be a [to all you sensitive, proper-name posters] University of Kansas Alumni!!!!

GGRRRRRRRRRRRREEEEEEEEEEEEEEEEAAAAAAAAAAAAAAATTTTTTTT job ladies. Way to stick it out. Bonnie is a good coach with tough breaks. She deserves this opportunity to prove how capable she really is. ROCK CHALK.

No second article, givng us a update of who stepped up, what the next game will mean. I expected something today and something tomorrow.

Kind of disappointing that there wasn't some type of article today.

Better double down on Delle Donne...at 28 ppg, she could be the best player in the country not named Britney Griner.