Purdue next test for KU 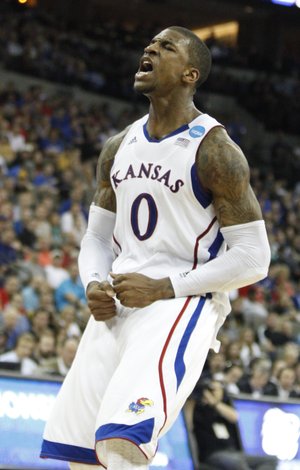 Robbie Hummel, a 6-8 senior from Valparaiso, Ind., who chipped in 10 points and grabbed seven rebounds in 32 minutes, happens to be one of the feel-good stories in college basketball.

Hummel — he averages 16.3 points and 7.1 rebounds a game — has twice come back from right ACL surgery. He tore the knee ligament on Feb. 24, 2010, at Minnesota and missed the last eight games of his junior season in which he was named All-Big Ten. He tore it again at practice the ensuing October and missed the entire 2010-11 season.

Tharpe plays a lot: Naadir Tharpe, who played 13 minutes, went 0-for-3 from the field.

He has played double-figure minutes in six games all year: 19 versus Towson, 17 vs. Howard, 12 vs. Texas Tech and 10 vs. South Florida and Florida Atlantic. He took just 12 shots during the entire Big 12 season, making six. He hadn’t taken more than one shot in a game in seven games, since going 1-3 vs. Texas Tech on Feb. 18.

KU coach Bill Self on Tyshawn Taylor’s cramps: “I didn’t really know what was going on. He told me in the first half he was starting to cramp, which isn’t really a good sign to be cramping up in the first half. All they did was they went back and put IVs in him, and he just didn’t respond very well. He’s been sick, under the weather, dehydrated. The doctor said he should be fine by Sunday without any problem.”

Releford’s brother: The Releford brothers won’t be playing against each other in the 2012 NCAA Tournament.

Trevor Releford, brother of KU’s Travis Releford, missed a deep jumper at the final horn as Alabama fell to Creighton, 58-57, Friday in a second-round Midwest Region game in Greensboro, N.C. Releford finished with 14 points for ‘Bama.

The Crimson Tide called a time out with 2.4 seconds left despite the fact the team was about to get an open look on its final possession. starting with eight seconds left when CU missed a free throw. The final shot for Releford was rushed and off balance. He would have had a deep open look had the Tide not called time.

“I don’t know if he got fouled or not,” Releford said. “I wanted them to advance but they had a good season.”

“The crowd doesn’t have any bearing on us mentally to the game,” said MU guard Michael Dixon, who had 22 points and five assists. “That’s just something that happened and we weren’t too worried about it.”

Norfolk State became just the fifth No. 15 seed in NCAA history to win a first-round game and the first since 2001. Later, Duke became the sixth No. 2 to lose. Lehigh handled the Blue Devils on Friday.

Of Missouri’s loss, Tyshawn Taylor said: “I watched a lot of the game. I was shocked and surprised, not upset, but shocked. In the tournament, seeds don’t matter,” he added.

And KU extended its streak of not losing consecutive games - how long now? Such an impressive stat.

It's Bedore. What do you expect?

Glad to hear Taylor is doing fine. I was getting a little nervous last night. Especially since Mosshawk was blowing smoke all over the place.

For a while I pulling for Miz zoo since I thought it would reflect poorly on the Big 12 if they lost. Then I decided Miz zoo wasn't a Big 12 team anymore. It was an SEC school. So I did what my heart told me. I cheered for Norfolk State although I had never heard of the school. I thought Miz zoo is a piece of s..t that I have never liked why cheer for these losers. Way to go Norfolk State. Way to go, and goodbye, Misery U.

Big XII or not...MU never gets any of my cheers, just impossible.

We need to contain Hummel and Johnson! Johnson went inside on St Mary's pretty much at will. Hope that he gets to meet Jeff Withey!

Despite having great numbers the reason Missery lost is because they did not guard well on the perimeter and their inside play has always been suspect. Credit Norfolk State with the playing a perfect game plan and not getting rattled. They had Missery on their heels most of the game. Nothing like going out with THE greatest loss ever for a top 3 end of season ranked team to lose in their first NCAA tourney game. That has never, EVER happened.

Mizzoo's great #'s included last (?) in the conference D - just like Duke. It is why we will always be safe with Coach Self.

Does anyone know where KU fans may be gathering in Las Vegas to watch the Purdue game?

Get on www.kualumni.org & click on watch parties at the page bottom.

Purdue will be a tough matchup for Kansas with good perimeter shooting and tough defense.

Simple formula for success...guard the three point line like it was your sister's virginity, force all ball movement into the Black Hole named Withey and push the ball hard every time down court.

You have to figure Hummel and Johnson will get their points, although Hummel didn't really have a lot last night. We can't let others start going off, especially from 3.

On another note, for those of you who haven't seen it, there is a great youtube video out there from the Alumni Association party in Omaha yesterday, as people were watching the Missouri game. What was really funny, was there were two TV's in the room, one a closed circuit feed and one with the regular TV broadcast of the game. The closed circuit version was about ten seconds ahead of the other one, so those of us gathered around the closed circuit TV saw everything twice. The reaction in the room was priceless!

Let's take care of business tomorrow, and on to St Louis! Rock Chalk!!

Every team is dangerous in the Tournament, and every team is good, or they wouldn't be there. Defend, Defend, rebound, defend, and hit free throws....