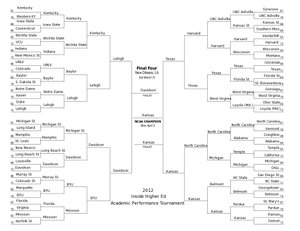 KU was joined in the bracket’s Final Four by Texas, Lehigh and Davidson.

Each game is judged using teams’ Academic Progress Rate. In case of ties, the teams’ Graduation Success Rates are used.

A team’s APR is a score the NCAA uses to track academic eligibility and retention among players. In May, the NCAA recognized KU’s men’s basketball team as one of the teams to earn a perfect 1,000 score.

“While their APR is probably the last thing on these athletes’ mind at the moment, it shouldn’t be,” the website reported. “That’s because in October, the NCAA Division I Board of Directors passed rules that by the 2015-16 season schools will be required to have at least a score of 930 to participate in any sport’s postseason competition.”

The GSR is a stricter metric that measures graduation rates. KU had a GSR score of 91, using six-year graduation rate data calculated from 2003-09. That’s up from last year’s score of 80.

KU beat Detroit, Purdue, Belmont, North Carolina, Texas and Davidson on the way to the championship. KU was in the annual bracket’s Final Four last year, and won the tournament again in 2010.

“I think it reflects the effort that our basketball players, our faculty members, our academic counselors and our tutors put into the academic side of college life,” said Jim Marchiony, associate athletics director. “It certainly is nice that we’ve done so well the last three years.”

And as for KU’s traditional rivals, Missouri and Kansas State? MU lost in the Sweet 16 to Brigham Young, and KSU dropped in the Round of 32 to UNC Asheville.

Dont let Mizzery see this. They'll pitch a bit*h about us getting this and not them. Ya know, since they have the #1 rated journalism school and all........

I had the same thought. I'm sure they'll be saying it was rigged. They're so predictable.

Self and his staff are to be congratulated on another well deserved award, be it post season or however one qualifies it.

This award should help in recruiting. If parents are really interested in their son's welfare after leaving college, they will, or should, consider what type of education they'll receive.

I may be wrong, but I think academics and bad graduation percentages may be why UConn won't be allowed to play in a post-season tournament next year. As long as an athlete achieves passing grades in the classroom, I don't think it counts against the school when they leave early (for the NBA. or when they transfer). But it makes one wonder how a team made up primarily of one and dones can stay qualified as well. (Thirteen scholarship athletes, and 10 or so leave before graduating. Something doesn't sound right, to me anyway.)

Jay Bilas tweeted about the APR not long ago: you leave to go to another school and continue your education, the old school takes an APR hit. You drop your education and go pro, no APR hit.

Mahalo for the correct information.

Still wonder what classes some of those OAD's take while in school - Remedial reading or first grade arithmetic?

I think this is great news! Way to perform on and off the court Jayhawks!!!

So we'll have two NC's within a month's time.

"The Power of Positive Thinking", new and unabridged edition, by nuleafjhawk.

Win a free copy. Drawing to be held after ticker tape parade down Massachusetts Street to celebrate KU winning the Big Dance. :>)

I HAVE to be upbeat and positive now. I tend to be a real [insert bad word(s) here] when we get beat in the tournament - unless we make it to the Final Four.

I can stand getting beat if we make it that far - don't like it, but can stand it. These losses to the you know who's just make me lose my mind temporarily.

It's March 12th - I can boldly predict total dominance by the Crimson and Blue at this point !!

I ditto those comments. Especially the last line.

Very frustrating when the Jayhawks fall short of the Final Four. However, before this season began and from some of the comments made on this board, there were a few Jayhawk fans who were concerned about even making the Big Dance.

Would be very interesting if the tournament were to be held round robin, double-elimination between just the top 8 ranked teams. (ie. The 1 and 2 seeds.) It would make the regular season games that much more important, like it is in football. Of course, the talking heads would go nuts arguing that a team didn't make the "Top 8" cut. (Maybe they could start a new competition between commentators: Last man standing in a knockdown, dragout fight. Might help get rid of some of the lifers who are past their announcing prime. Hint, hint.)

Just my thoughts: This talk of enlarging the tourney to 128 teams is all about ticket sales and money. Not about who's the best team. Just imagine, inviting over 1/3 of all the Div. I teams to compete for the championship? Why even play the regular season games? Two prime examples: VCU barely making it in the tourney last year and advancing to the Final Four. And UConn winning it all, while achieving just a mediocre conference record. That's why, IMHO, total season wins trump tourney wins.

Oh, well. Those comments should generate a few more among the faithful.

Couple this with our multi-National Champion Debate team and I can only come to one conclusion...thank God I started at Kansas 46 years ago before all the smart kids showed up!!!! :)

Yes....I too benefitted from the open admission rules.

I think it is interesting that if you look at our NCAA bracket...we would start out with a victory against Detroit, good chance that we would play and of course we would beat Purdue and UNC.

3 of the teams we beat winning this tournament and would most likely play in the Big Dance.

That's because it's set up identical to the NCAA basketball tournament bracket.

Still waiting on you to eat crow for shoving that "MU will be a #4 seed" garbage on everyone for two weeks.

Crow eaten, but they were the bottom #2. I still think they got lucky.

Hell, this is great! This is huge!

I would love to see KU set yet another precedent in college basketball and hang this banner up in the Field House along with basketball NCs!!!!

This is just the best news I have read in a long damn time.

Agree it should hang in the rafters!

Here is a link to the brackets:

By the way, KU also won in 2010 and made it to the Final Four last year. With Harvard in the tournament, you would think that it would have been the favorite.

This is their starting line up.

They have one Mickey D that starts--McCallum.

Caliste shoots 39% from. Otherwise, they have no credible trey shooters.

Against KU they won't.

KU's perimeter is longer, does not have to guard the trey, and so will strangle Detroit's starting perimeter in the mid range, feed them into our bigs, blocks will happen, and KU will go into transition faster than you can say "Lord have mercy on their souls."

Inside, Thomas Robinson will literally crush Doug Anderson, while Jeff Withey will block everything LaMarcus Lowe thinks about shooting.

This will force Coach Ray MacCallum to come quick with his big transfer center, Eli Holman, who at 6-11 and 260 is a load, but nothing KU hasn't played against a number of times this season.

Detroit Mercy is used to getting a boost when Holman enters. It won't get it this time. Holman enters five minutes in, he is going to get double teamed by our sagging guards who will strip him senseless while he is being guarded from behind by jeff. If Holman were to get loose, Thomas will come across the lane hard and Mr. Holman will wish he were back in Richmond, California sniffing refinery fumes.

When Holman doesn't work, Minnerath and Bruinsma are going to be doing a lot of designated hacking. Trouble is, Kevin Young and Justin Wesley, who are identical in size and just as tough, are going to foul the living shizz out of their to hackers and the refs are not going to call anything on anyone.

KU's perimeter guys are going to keep transitioning on Detroit and converting.

Detroit will not know what hit them about 7 minutes into the second half.

KU is going to beat these guys. It won't be a lopsided win, because Self is going to play his bench as much as humanly possible to keep a full amp performance in reserve for Purdue, or St. Mary's, 48 hours later, and I'm guessing it will be Purdue.

Dick Vitale is loyal to his school.

His school is about to get schooled.

I sure hope so..but if not, at least EJ can come in off the bench.

There was a time I really liked Mr. Vitale. I still think he has been great for the game of college basketball but now I no longer enjoy listening to him. Give me Jay Bilas or Brent Musburger any day.

I'm sorry but did you see Jay Bilas' picks for the 8 and then the final four.

1s and 2s across, with all of the 1s winning. Thank Kentucky and Syracuse winning and then Kentucky winning.

I did..but I still think overall he is one of the most objective sportscasters in the business.

With Holman on the floor there will be a lot of 5 on 4 fast breaks. Speed should be our friend.

An extremely fantastic job by all those in the program.. A lot of hard work to make it to 3 Final Fours in a row..and winning twice.

"...by the 2015-16 season schools will be required to have at least a score of 930 to participate in any sport’s postseason competition.”

With the two headed monster looming, the post season income potential and the recruiting advantages, this is huge if for no other reasons. Kudos to the NCAA for recognizing the core value of higher education institutions.

Where can I get n APT National Championship T-shirt?

Duke went down in the first round and KState doesn't? Hmm, call Mythbusters!

I have said all along that it is a false myth that private schools can't recruit certain guys, because of grades. Private schools can let in anyone they want, because they are private; that's how Dubya got into Yale and then got into Harvard's graduate b-school. If a private school is committed to a sport, they can bend the rules more than any state school.

But, if a recruit went to several high schools and his transcripts are slightly questionable, they can't even get into a "state" school, regardless how much talent he would bring to a program. That's been seen just this year.

Exactly jaybate..even Al Gore made it into Yale : )

A headline that they should have used: "KU wins with class."

If your average Johnson County KU undergrad was as dedicated and passionate and committed to their dreams as our B-ballers, just imagine how much better the world would be.

Are we ready for that kind of tide of liberal arts majors?