Bill Self ‘not a fan’ of Baylor’s neon uniforms 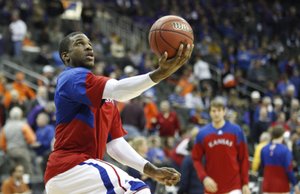 “I’ll be real honest with you, I’m not a fan. That’s the new fad, teams out of the box with uniforms,” Self said Thursday after his own squad’s 83-66 victory over Texas A&M. “Those are really bright. I think tomorrow they have to wear dark colors. It’s the benefit of being the higher seed ... it won’t hurt our eyes tomorrow,” Self added with a big smile.

KU and the Bears will tangle in a semifinal at 6:30 p.m. today in Sprint Center.

“It hurt my eyes watching them on TV,” KU junior Elijah Johnson joked. “I couldn’t watch the game too long because it was killing my eyes. I wonder why we didn’t get those (uniforms).”

Taylor had 28 points and Thomas Robinson 27, while Perry Jones had 18 and Quincy Miller 17 in Lawrence. Jeff Withey had 25 points, Taylor 19 and Robinson 15, while Jones had just five points off 1-of-8 shooting in Waco. Pierre Jackson led the Bears with 16 tallies in Waco.

“He’s terrific. He’s a lottery pick. He’s a pro,” Self said of Jones, who scored 31 points off 11-of-14 shooting against K-State.. “We’ve got good players, too. We have a serious challenge ahead of us.

“We played two of our better games of the year against them, and they probably look back and say they did not play two of their better games against us.”

Asked what the Bears need to do better this time to beat KU, Jones said: “Defend and rebound. They’re a great offensive and defensive team. We’ve got to be able to rebound and get a lot of stops, as many as possible, because they can get on runs and it can get ugly.”

Faces in crowd: Former KU coach Larry Brown attended. He sat in the same row as ineligible KU freshmen Ben McLemore and Jamari Traylor. The two will be eligible to play next season.

Stats, facts: KU (27-5) has won 27 games for the sixth-straight season. ... KU advances to the conference tournament semifinals for the 14th time in Big 12 history and 32nd time overall. ... KU is 32-7 at the Big 12 tourney and 14-3 in Sprint Center. ... KU is 20-1 all-time against Texas A&M and 12-1 under Self. ... With Johnson’s career-high 26-point performance, all five of Kansas’ starters have recorded a 25-point game this season. ... KU hit a season-best 61.4 percent from the field. Johnson’s previous career high was 23 points versus UCLA in November in Maui. ... Robinson made both of his attempts from beyond the arc, giving him six three-pointers in his career and his first game with multiple makes from three.

They hurt my eyes too!!! Will be a tall order to beat $hitty Drew and his Bears for a third time. RCJGKU!!!

Here's a scheduling thing i've noticed.... KU has played 7 top 6 teams this year, and if they meet Mizzou in the big 12 title game, it could be 8. Has KU ever played 8 top 10 teams (let alone top 6) before the NCAA tment began? Also I noticed KU's RPI is 6 right now with a strength of schedule of 10. It seems to me the past two seasons that KU ended the season in the top 5 in RPI, yet I thought their schedules were not nearly as difficult as this season? My memory could be completely off there, not sure. Also, as of right now, KU has a 12-4 record vs. the RPI top 50. Nobody else in the country has more than 9 wins vs the RPI top 50. Its time for Rock chalk championship deja vu!

KU has been great at scheduling the best of the non-BCS champions and tourney teams in years past. They were teams that are not as strong as Duke, UK, tOSU, and even less recognized by most fans, but end up doing great things for the schedule/SOS/RPI vs. pummeling a bunch of warm bodied doughboys like some other schools.

From now on I think we can refer to Baylor as Highlighter U.

Exactly what I thought about those uniforms--I have a highlighter that color!

Oregon has been doing that schtick for years. They are the original "highlighters".

Didn't I read the other day that when missucki recorded THEIR 27th win, it was the most regular season wins in school history?

I was thinking the same thing...

Because Kansas uniforms represent the USA. They're Red, White and Blue! You don't mess with America's team!

BenMac and Jamari sat with good company. Those two should be very hungry players by the time dinner is served late November.

Hey, cut Baylor some slack. If you can't party on campus, they have to get some excitement with the gaudy uniforms.

Wasn't there a TeleTubby that color too?

Gigantic glow in the dark condoms! Hope they don't break and emit Baylor "juice" all over the Sprint Center court.

Anybody know how to get vomit out of a keyboard?

The radioactive substance the ninja turtles came from

Regarding BU's uniforms, I wonder if their players thought "Man, we gotta go out in PUBLIC dressed like this?" And did Nike execs snicker, "Pay up, man, they actually WORE them."

That debacle also is a great illustration of a university that has and appreciates tradition, compared to the new kid on the block who's all about flash and bending over for the corporate c**k.

Dear ESPN. Get Coach Knight, Mr. Musberger and Ms. Rowe together during the game for a panel discussion of the live action. I do not want to look at those bright uniforms again! Audio alone is fine if Baylor wears that garb.

Does KU want to win this ugly? KU's seed won't be impacted by a loss to Baylor or Mizzou - a loss is a loss, in other words.

If KU has to battle Baylor for 45 minutes and barely rests anyone, do we want to play Mizzou depleated (Mizzou will likely have a relative cakewalk)?

Some fake jns stringers pretending to be legitimate pixel-burned wretches from the Fourth Interactive Estate interviewed Alfred Zheimer, the self-proclaimed new executive director of F.O.R.G.E.T. and learned that, due to legendary coach and color commentator Robert Montgomery Knight's persistent references to Elijah Johnson as a sub in the TAM broadcast, F.O.R.G.E.T. is attempting to raise $400 million dollars to buy Aricept in sufficient quantity to help Coach Knight finish the season.

Keen jns stringers, all former employees at the scandal-ridden and now defunct London-Wall Street Financial Times Clarion Picayune Intelligencer, immediately grasped the $400 million would purchase vastly more Aricept than Knight was likely to need to make it the rest of the way this season.

When asked by ins stringers why such a large sum of money was being raised, a spokesperson for Mr. Zheimer reputedly intervened and said Mr. Zheimer could not recall the reason and that under advice of counsel he would not answer further questions.

At least he didn't refer to the team as being 9 deep again. Maybe the producer gave him a sticky note about that one finally.

Good points, BayHawk. That would actually make us something like 18 deep.

You must have missed it, UncleMilty. He actually did talk about how one of KU's strengths is its depth. So he apparently is continuing along that ridiculous line ...

Like I posted before....win the whole damn thing, Our first round game won't be till next Friday....that's six days of rest and recharging.

Heck, I was playing full speed, full court basketball twice a week into my mid 50's!!

Never duck a game with Misery!!!!

Man, u r a studddddddd!

Get yourself a uniform and some Addidas and suit up for this game today.

Today Baylor is going to wear throwbacks to honor the 2003 team... Black and white stripes.

As long as we don't miss our free throws.

Gotta hand it to you, ahperse: I can't stop laughing about that one. I excho jaybate's reference to PHOF.

Yeah Baylor's neon uni's were unbelievable. If the lights go out in KC, just find the players from Baylor. They'll glow in the dark.

Really, I was looking for a light switch to turn them off----man, they were bright!