Ten games into the 2012 season, Kansas University senior third baseman Zac Elgie still was looking for that one offensive highlight that he could talk about for years to come.

During the Jayhawks’ 7-4 victory Tuesday afternoon at Hoglund Ballpark against visiting North Dakota Unviersity, Elgie may have found it. 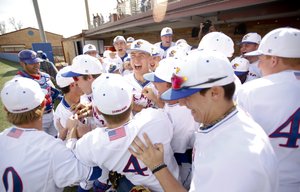 After watching Kevin Kuntz (walk), Ka’iana Eldredge (walk) and Tucker Tharp (single) reach base before him in the bottom of the first inning, Elgie, KU’s clean-up hitter, rocked a 1-0 pitch 380 feet over the left-center field fence for a grand slam that not only gave the Jayhawks an early lift but ultimately proved to be the difference in the ballgame.

“Coming into the game, I didn’t think anybody was going to be able to hit a home run, with the wind howling in like it was,” Elgie said. “We were hitting balls well in (batting practice) and weren’t getting balls anywhere near the warning track or over the fence.”

When it counted, though, both Elgie and freshman left fielder Michael Suiter (solo shot to lead off the third inning) recorded home runs, a feat Elgie said was tied to their approaches at the plate.

“Sometimes in baseball the less you try, the more outcome you get,” Elgie said. “I just tried to see the ball deep and put a good swing on it. Suiter and I both did that today; mine just happened to have a couple more guys on base.”

While Suiter’s shot to left was the first home run of his college career, there’s a good chance that Elgie’s meant more. For starters, the Minot, N.D. native’s long ball came against a university from his home state. In addition, Elgie’s second homer of the season came in the home opener of his senior season.

“It was great,” Elgie said. “I got a new helmet today, some new batting gloves. It all fit real well.”

Depending on their status and position in the program, teammates’ reactions to Elgie’s grand slam differed.

Senior first baseman Jake Marasco shrugged it off with a smile. When asked what he said to Elgie when he returned to the dugout, Marasco joked, “I told him to do it again. Hopefully we have more of those this year, so we don’t want to get too high on him. But, yeah, we’ll tell him ‘Do it again.’”

As for Robert Kahana, Tuesday’s starting pitcher, his reaction was a little more appreciative.

“I was like, ‘Thank you,’” Kahana recalled. “I didn’t know what else to say. I was speechless. That was a bomb.”

With Elgie, Suiter and Marasco (4-for-5, one run) providing most of the punch for the KU offense, the pitching was controlled by a couple of players on very different ends of their careers.

Kahana, a freshman from Ewa Beach, Hawaii, picked up the first victory of his career by allowing zero runs and zero hits in four innings. KU coach Ritch Price said Kahana was only scheduled to pitch three innings but made it through four because of his efficiency.

After freshman and Free State High graduate Colin Toalson surrendered four runs in the fifth inning, fifth-year senior Jordan Jakubov went the next three innings, allowing just two hits and striking out six. From there, junior closer Tanner Poppe slammed the door with a 1-2-3 ninth inning and the Jayhawks improved to 6-5.

As far as home openers go, this one was almost flawless. With temperatures around 70 degrees, Price said it was the nicest weather day he’d had for an opener since he arrived at Kansas. Marasco and Elgie both said they sensed a little extra excitement from finally playing a home game.

“The only thing I was disappointed with today is we had a chance to bury them (and didn’t do it),” Price said.

Added Marasco: “We didn’t finish the game like we should have.”

KU and UND will play the final game of the series at 3 today at Hoglund Ballpark.

Good home opening win. However, why does KUSports.com have an ad for Varney's (K-State store) on this site? The ad changes up each time you go thru this story so you won't always see it. But why is it on here at all, you all can't be that hard up for ad sales can you? Rock Chalk!!