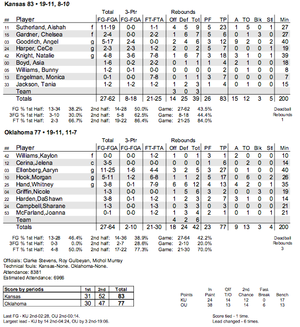 Behind Aishah Sutherland’s 23 points and nine rebounds, the Jayhawks beat Oklahoma, 83-77. It snapped a 15-game losing streak to the Sooners, gave KU coach Bonnie Henrickson her first victory over OU and, more importantly, gave the Jayhawks a No. 6 seed and resultant bye in the first round of the upcoming Big 12 tournament.

Kansas improved to 19-11 overall, 8-10 in the league and earned the No. 6 seed based on league tiebreaker rules. The Jayhawks — who claimed their highest Big 12 finish under Henrickson and whose eight league wins are their most since 2000 — will face third-seeded Texas A&M at 7:30 p.m. Thursday at Kansas City’s Municipal Auditorium.

“I thought Kansas played incredibly inspired and we didn’t,” OU coach Sherri Coale said. “We were as flat as could be. We knew what was on the line, we knew what was at stake and I can’t explain it. I wish I could.”

“Kansas averages three threes a game, I believe,” Coale said. “The way we defended them was according to the way they’ve played. I think that strategy was correct.

“You have to make free throws. When you make free throws, you win the game. It’s that simple. Obviously, they made a lot of free throws down the stretch as we were trying to foul and get back in it. But, up until that point we had plenty of opportunities.”

Kansas jumped to an 11-3 lead before OU rallied.

OU claimed the first four points after the break, grabbing its first lead. Goodrich responded with a layup, and sophomore CeCe Harper knocked down a three to give the Jayhawks back a 36-34 advantage with 18:47 left to play.

The two teams traded baskets for the next three minutes with the lead changing four times. Kansas then went on a 9-0 run, sparked by a jumper from Sutherland and supplemented by another three from Harper. Sutherland had six of the points during that stretch.

A jumper from Knight gave the Jayhawks a 10-point lead, their largest, with 9:11 to play. After swapping baskets over the next few minutes, Knight hit her career-best third three-pointer of the night to make it 58-47, KU. Goodrich and sophomore guard Tania Jackson soon followed with threes of their own to make it 64-50 with 4:24 to play.

“We didn’t play as fired up — bottom line,” Coale said. “We didn’t get 50-50 balls, we didn’t cover for each other on defense, and we didn’t crash the offensive boards. We got blocked out, and they were physical, and we were done with it. They wanted it worse than we did. Simple.”

Congrats on the win Ladies.

Just give her a couple more years and Bonnie will have this coaching thing figured out!

Maybe she should go back

Bonnie's record prior to KU is no longer relevant. She has had more than enough time to put her stamp on this program. The year is a perfect summary to her KU career. Good talent but average results.

The year is a perfect summary to her KU career. Good talent but devestating injuries. Fortunately, the program she is developing is gaining the quality depth that has allowed the ladies to recover.

Nice win, ladies. Even without considering the setbacks you've had to deal with, very impressive!

Heopfully this win can get them into the NCAA Tourney.

Not really that desperate, a win or two this week would wrap up a bid nicely.

As of right now, KU is projected as one the last 4 in according to ESPN. A win over Texas A&M on Thursday should lock KU into the NCAA, and a close loss wouldn't necessarily knock them out of the tournament, but they would need to hope there aren't any bids stolen in the conference tournaments. Right now, KU women are very big fans of St. Bonaventure, Fresno St., Missouri St., Delaware, Green Bay, and Gonzaga. Those are all teams in 1 bid leagues that could turn into 2 bid leagues if any of those teams lose in their conference tournaments. St. Bonnie's and Gonzaga both play in their conference tournament title games tomorrow (3/5) which will be the only two title games played before KU is likely gone from the Big 12 tournament. The WAC (Fresno St.) title game is on the 10th while the Colonial (Delaware), Horizon (Green Bay), and Missouri Valley (Missouri St.) take place on the 11th. Here's a like to the current projected women's bracket on ESPN. http://espn.go.com/womens-college-basketball/bracketology

What is Bonn'e's overall Kansas win/loss record? Wiki stop counting at the 2009 season.[not a great sign!!]

136-119, which, of course, includes both non-conference and in-conference (not-so-hot record) games.

Your logic. Impressive? Not overly so.

If they get in after they lose to A and M(Gary Blair isn't going to go down to Bonnie) then the Womens field must be really bad this year!

Wow, Angel's got the "eye of the tiger" going in the photo above.

I am a KU grad. I am a high school girls basketball coach. I have a DI prospect for a daughter that is a KU freak. Several years ago we went to watch KU play CU in Boulder. We sat in the row right behind the KU bench. KU was up 15 in the first half but I could tell they were going to struggle to win the game. Not because CU was awesome (fired the coach a year or so later), but because I saw poor coaching from HCBH. I saw no emotion from HCBH. As the wheels starting falling off the Jayhawks, HCBH never raised her voice, never got upset, never changed plays, strategies or players. The players never adjusted to anything the Buffs did. They kept running the same play over and over to get it right and CU kept stealing the ball and scoring. KU lost by 30.

My daughter went to the following two years of summer HCBH camps and was disapointed both times. She loved the players but not the coaches and not the lack of organization. She has been to camps at Wyoming, Colorado State and Northern Colorado and all 3 were far superior in every way...except for the KU players and being able to play in Allen FH. That is all she got out of camping at KU.

She no longer wants to play for KU!

Perhaps she should give KU another look. The current staff of assistants show more emotion during the games (even if Bonnie doesn't). I have my misgivings about how long it has taken for the women's program to get closer to what it was in the 90's- back when they won the last big 8 conference title and the first big 12 conference title and twice made the sweet 16 in the NCAA tournament. But I do think the new staff of assistants have improved the outlook both in recruiting and in game strategy, especially Troy Verdi and Aqua Franklin.

Keep looking. Even with the current assistant coaches the program loses players every year and two players in the middle of the year this season. Somehow make contact with those families or players and possibly find out the true reason for their departures.

goal! keep the fire burning, lady Hawks! nothing is impossible in basketball!! put your shoes on, ladies!! good luck the rest of season, NIT or NCAA!!!

Just cut the head off the parasite(Bonnie) and let the host(KU) thrive!