Kansas forward Thomas Robinson, top, hugs teammate Tyshawn Taylor after Taylor's feed to Robinson for a dunk against South Florida during the second half on Saturday, Dec. 3, 2011 at Allen Fieldhouse.

Hey guys — We were having some issues with our blogs earlier, but those problems have been resolved.

Because of that, we've switched Matt's live coverage over to his Tale of the Tait blog. You can find his latest updates at the link above.

For the third year in a row, fans of the Kansas University men’s basketball program have a rather compelling reason to tune into the annual NBA Draft — two of them actually.

Although it’s unlikely that former Jayhawks Thomas Robinson and Tyshawn Taylor will become the third consecutive pair of former KU stars to be drafted with back-to-back picks — Cole Aldrich and Xavier Henry were picked 11th and 12th, respectively in 2010 and twin brothers Markieff and Marcus Morris went 13th and 14th, respectively last year — it seems safe to say both will be picked.

What’s more, it seems possible — perhaps even likely — that Robinson, a first-team All-American and runner-up in most national player of the year votes, will become the second highest Jayhawk draftee in school history, behind only Danny Manning, who went first in the 1988 draft.

A decade later, the Denver Nuggets picked Raef LaFrentz with the No. 3 pick in the 1998 Draft, and, in 2002, Memphis made Drew Gooden the fourth overall selection. 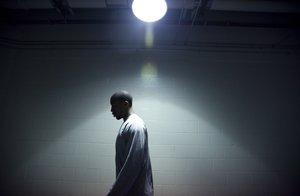 Robinson, it has been rumored, could go as high as No. 2 to Charlotte, one spot behind Kentucky’s Anthony Davis, who is all but guaranteed to be the top pick.

The way things look today — and, remember, it’s the Draft so things could change A LOT between now and Thursday night — Robinson appears to be the pick for Charlotte as long as the Bobcats keep their selection. If they trade out of it, which is a distinct and increasing possibility, Robinson may drop a couple of spots, but most believe he’ll be at least a Top 5 pick no matter what. 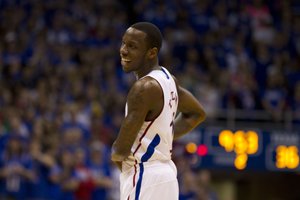 Taylor’s draft prospects are a lot more uncertain, as most scouts and analysts I’ve talked to see him going anywhere between 22 and 42. People seem to be split on whether Taylor is a first-round guy or not and there are even those out there who believe he might not be drafted at all.

From where I sit, based on who I’ve talked to, that would be nuts. It seems clear that he’ll be picked and my gut tells me it’ll be closer to 30 (on either side) than 40.

Time will tell, but in order to help us get to that point, here’s a quick look at what’s in store for the day. As has been the case during each of the past two drafts, I am on the ground out here in New York and I’ll be spending time with Robinson and Taylor throughout the day.

As a sure-fire lottery pick, Robinson has a lengthy list of NBA-affiliated obligations today, including a media session from 11:30 to 12:30 (central time), an NBA Cares event with a Boys and Girls Club and a rookie initiation hosted by the league. That’s to say nothing about endorsement opportunities that his agent set up and all of the photo and video shoots for draft night and various video games. It’s a crazy day every year and I’ll try to tag along for as much of it as I can.

In addition, I hope to spend some time with Taylor — either in the city or back in his neighborhood in New Jersey — and also have lined up a few interviews with people from Taylor’s past, who watched him grow up dreaming of this moment.

Stay tuned to the blog throughout the day for video clips and photos from the Big Apple. Naturally, I’ll also be live at the draft on Thursday night, blogging the picks and getting Robinson’s reaction right after he’s selected.

I’ll be pounding the pavement and hopping onto trains and into cabs a lot throughout the day, so getting to the computer could be a challenge at times. Jesse Newell will be back at the office helping me get the videos and photos posted to the blog. So be sure to check in often for updates.

As always, it should be a blast of a day and I’m hopeful that it will deliver some great stuff.

Be careful in Hoboken, if you end up there. Not much good news in that part of the world:

You think Tom would allow you to expense a bullet-proof vest?

I went there on my last NYC visit. First time. Good place. Home of "The Cake Boss." Saw the joint. Line a mile long out front. Didn't even try to go in. But Hoboken is a decent hood with plenty of Italians. Frankly, I would be very afraid to commit a crime there. I got a feeling the Black Hand would mete out justice.

It would have been cool if you had referenced that Wilt didn't have a draft number because he was a pre-draft "territorial pick" of Philadelphia (because of his childhood roots, which was actually the first time an NBA "territorial pick" had been made that wasn't based on the location of where a player played college ball.) Wilt would have almost assuredly have been the #1 pick if he had been available. (He went on to be the Rookie of the Year.)

Thanks for all of your work, and good luck in the big city (and also in Jersey!)

Mahalo for the information regarding Wilt playing for Philadelphia. It's well known he left early to play professionally, but how Philadelphia was lucky enough to acquire his services was something of which I was never aware. One can only imagine the records Wilt would have set, if he had been allowed to play his freshman year and played four years at KU.

Well, as Ol' Blue Eyes from Hoboken once said, "if you can make it there, you'll make it anywhere."

Perhaps if Ty can make it at Kansas, he'll make it anywhere!!

Best of luck, Tyshawn. Jayhawk Nation will be glued to TVs, pulling for you to be picked up by a very knowledgeable management. Thanks loads for your Kansas years, esp. 2011-12. Your 8th semester goes down as one of the most terrific contributions to the exalted history of Jayhawk Hoops.