Russell Robinson, who has played professional basketball in Spain and Turkey the past two seasons after a stint in the NBA Developmental League, says he’s thoroughly enjoyed competing overseas.

There’s been one huge drawback to earning six-figure paychecks, however.

“I miss home. That’s the biggest thing,” said Robinson, a 26-year-old native of New York. “I get away and enjoy it a little bit, but then I get homesick.”

The 6-foot-1, 195-pounder returned from a six-month stay in Trabzon, Turkey in mid-May. He spent a few weeks with family members in New York, before heading to Lawrence on Thursday for the Rock Chalk Roundball Classic charity basketball game — one in which he scored 21 points off 7-of-17 shooting. He hit five threes.

“I’ll be here two weeks. I booked a one-way flight here. Maybe I’ll stay longer,” said Robinson, who plans on working out with KU’s current players, who are in town for summer school.

“I love to come back any chance I get. It’s always good to be around some love. With KU fans, you feel a lot of love,” Robinson added. 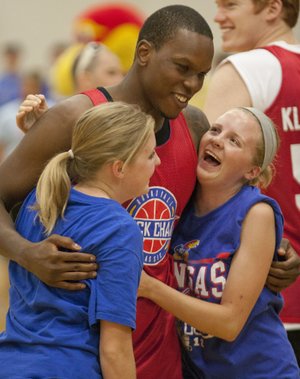 Sarah, right, and Mary Buckels are surprised when Russell Robinson walks up behind them before the start of the Rock Chalk Roundball Classic held Thursday, June 14, 2012, at Free State High.

“I had a couple minor things that nagged me,” said Robinson, who missed several games because of a dislocated thumb and sprained knee.

“That whole tournament run saved my season,” he added of the Jayhawks advancing to the national title game in the NCAA Tournament. “(Because of the injuries) I was a little stressed out over there. Watching them on TV ... seeing the guys do so well helped me so much.”

He wasn’t surprised the Jayhawks stormed past North Carolina and Ohio State en route to the title game appearance vs. Kentucky.

“They had two great players in Tyshawn (Taylor) and T-Rob (Thomas Robinson) and other guys playing well. And coach (Bill) Self, who is a great coach,” Robinson said in an interview at Self’s Parent-Child camp on Friday.

Robinson plans on playing in Wednesday’s Bill Self camp alumni game while finalizing plans for next season.

“I’ve got some things on the table now,” Robinson said. “The NBA ... I’m still trying to do that. If it doesn’t work out, I’ll go back over there (Europe). I’ve done (NBA) summer league four years. I’ve played for a lot of teams. We’ll see if that’s an option.

“Europe is always an option for me. I could always go back to the D-League. We’ll see.”

It sure is great to hear he is happily doing well for himself.

Not wise, being critical of any aspect of Bill Self's coaching. However, I think that the squad might have benefitted from Russell's gleaning more playing time, esp. in Feb. of his freshman season. A very strong squad of seniors seemed totally exhausted, heading into NCAA tournament time. Was terrific to see Russell bite the bullet, then storm back so resoundingly his sophomore campaign...and thereafter. He is one of my favorite Jayhawks in the Bill Self tenure. With 2 or 3 more inches of height and a half step quicker acceleration, he might have been one of the draft selections who could have placed a handsomer face on a sometimes ugly NBA facade.

Did I miss the criticism of Self?

Only by REhawk, and he was gentle. Just feels it would have been a benefit if T-Rob had played more his freshman year.

pretty sure everyone knew what he meant.

and besides, it probably applies to both TRob and Russ anyway.

Seemed like RussRob was making nice progress middle of his freshman year and then got poked in the eye and missed some games.

Gosh, I hope he chooses the profession after he finishes playing.

One more thing about Russell.

He may measure only 6-1, as the story suggests, but that short neck of his lets him play 6-3 at least.

All other things equal, give me the guy with the shorter neck.

Russell Robinson is nearly my ideal of the structural advantages of the short-necked player.

Russell, I love you and your short neck.

But I love what's in the brain case and inside the chest cavity even more.

Be a coach some day.

You have the tenacity, charisma, humor, work ethic, basketball IQ and generosity of spirit to be a great coach.

Since your playing days, I have dreamed of you, even more than Danny, someday becoming KU's coach.

Like Danny Manning, you embody the very best in KU basketball.

And you both have rings to prove it.

P.S.: I forgot to mention your wiliness and that you played for a great coach. These definitely go into the making a great coach, too.

As an example, Travis Releford has a very long neck and he can guard like nobody's bidness on good wheels. Travis has bounce that compensates for his long neck. But if Trav meets a guy his height, with the same bounce, anticipation, desire but a short neck, Trav will have trouble.

Now, if Frankamp's got a long neck, all you can be absolutely sure of is this: when he plays a guy his height with his speed, bounce, anticipation and desire, he will have trouble with that opponent.

Frankamp's long neck and short height are going to make it very difficult for him to be a top collegiate player. Why? Because unless he has some freakish vertical bounce, or some freakish quickness like, say John Stockton, then he's going to have to shoot the rock either on rare wide open looks at the trey stripe, or he's going to have to go out to 26-30 feet to get his shots off. Just think how difficult it would be for Frankamp to get his shot off against Elijah Johnson anywhere on the floor?

There's no question he has a screaming trey gun.

But until I see him up against some D1 guys the quality of Elijah, I am just not expert enough to know whether he can overcome the long neck and short height.

I can only say that he is going to have to overcome those two things.

Gary, thanks for explaining who T-Rob and Tyshawn and Coach Self are.

Russel could try to go to the real NBA, and if he gets lucky he may get to play for the Knicks.

He is as good or better of a defender than anyone in the NBA, and he is a great ball-handler and play-maker. He is capable of hitting open shots, but that won't get him alot of playing time, although he has a shot at being in the NBA.

Also, how is Keith Langford not in the nba? He is definately good enough. He can defend, shoot threes and drive as good as anyone.

Last I checked, Langford is the highest-paid player in Europe. I'm sure that's got something to do with his absence from the NBA.

Maybe you ought to check more often. Langford is not and never was the highest paid player in Europe. If you are referring to the contract he signed with Khimki Moscow that made him one of the higher paid "American" players in Europe, that contract was voided 6 months later. As comparison, Josh Childress contract was twice as much. Keith Langford last played for the Maccabi Tel Aviv in Israel, which last time I checked, is not in Europe.

My favorite KU memory of Russell Robinson was the 3 that he buried against UNC in the opening minutes of the '08 Final Four. He was not known for being an outside shooter, but that was one confident stroke on the big stage.

The guy gave us the heart of a lion.

He will get a lot of love and no end of respect in these parts all the days of his life.

Welcome home, Russell. Stay as long as you can afford. Bank those dollars in order to purchase property so as to live someday in Lawrence.

Russell, we hope you will come back for visits forever! You are one of my all time farvorite Jayhawks!

Always will be one of my favorite players. Tough kid who was willing to defer and learn. Best of luck in all your endeavors. You will always be welcomed in Lawrence, native son.

Refreshing to hear about a player who doesn't believe he has an entitlement scholarship to NBA wealth and is willing to work for it. Same RussRob as he was at KU. Really hope that his dreams and aspirations come true! One of my all time favs!