Newcomer Landen Lucas waits to check in to the scrimmage on Wednesday, June 13, 2012 at the Horejsi Center. 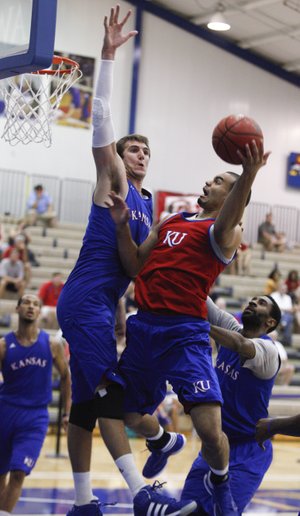 It’s easy to understand why Landen Lucas missed three floor shots and a pair of free throws during Wednesday’s Bill Self campers game in Horejsi Center.

The huge 6-foot-10, 244-pound Kansas University freshman center has been running on just a handful of hours of sleep all week.

He graduated from Portland (Ore.) Westview High on Monday, followed by an all-night graduation celebration, flew to his new college town Tuesday, then hustled to class and a doctor’s physical exam bright and early Wednesday.

“It’s going to take a minute for me to catch my breath, to get my legs under me. That’ll all come. It was just nice getting out there and getting to play,” said Lucas, who grabbed four rebounds while guarding, and being guarded by, senior Jeff Withey, who scored 16 points with 15 rebounds in the Blue team’s 62-51 victory.

“He’s good, really big and long,” Lucas added of 7-footer Withey. “I’m just starting to figure him out now so hopefully in open gyms and stuff I can do little things. I’m trying to see exactly how I can do work against him, but I can see why he got all those blocks and stuff.”

“The biggest adjustment for me will be the size difference. Everyone is big. Everyone is quick,” Lucas said. “Usually you can find a weakness in a big in high school. Everyone is good here. Getting adjusted to the tempo ... that will eventually come with just playing.”

Lucas received words of wisdom from his dad, Richard, a former standout at the University of Oregon, on Tuesday prior to leaving his hometown for KU.

“He said, ‘Rebound and do the things most people don’t want to do ... what they need from a big. If you do that, you’ll get playing time,’” Landen said. “I need to know my role. The gap is when Withey comes out and somebody needs to be anchor. Any way I can help and come in for him and try to hold it down in the paint, I’ll do it.”

Of finally being in college, Lucas said: “It’s a dream come true for every kid. This is just the start of everything. I’m ready to get started.”

KU’s Withey said he likes what he has seen from the newcomer.

“He’s a big guy. He ran the floor pretty well. It’ll be fun to play with him,” Withey said. “The coaches will get him ready to play.”

Also for the Blues, freshman Ben McLemore scored eight points and grabbed seven rebounds. He had the day’s signature play — a vicious one-handed dunk that came off his own miss.

“I followed my shot, saw an opening and dunked it,” McLemore said. “It was fun to play against Julian. Being in the NBA ... I’ve worked out with him sometimes. He shows you that hard work in the gym pays off.”

Minor bumps, bruises: KU freshmen Zach Peters and Jamari Traylor did not play because of minor injuries. Peters took an elbow to the head in a workout this week and was held out for precautionary reasons. Traylor has a knee bruise. Traylor coached the Red team, while KU senior Elijah Johnson, who is out until July 11 following offseason arthroscopic knee surgery, coached the Blues.

Highlights: Wright slam-dunked off a pinpoint pass from Ellis. ... Naadir Tharpe hit a deep two-pointer, just in front of the three-point line. ... Tharpe had a lob pass to Wesley for a slam. ... Ellis dunked off a lob from Aaron Miles. ... White hit a driving layup off a feed from Brady Morningstar.