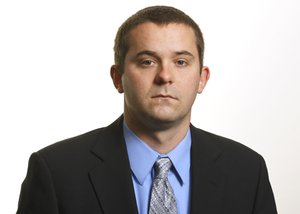 When the Kansas University football team finds itself in an early deficit or some other predicament this season, tight ends coach Jeff Blasko is confident the man in charge won’t get rattled.

Blasko was the quality-control coach for the Florida offense in 2011 and worked side-by-side with Charlie Weis, offensive coordinator for the Gators at the time. When Blasko thinks about the qualities he admires in Weis, the first-year KU head coach, his mind takes him back to a Florida home game last November against Furman, an NCAA FCS team. The heavily-favored Gators trailed by 15 points twice in the first quarter.

The unspoken, overwhelming feeling in the coaches’ box, Blasko said, was: “This isn’t supposed to be happening.”

As Blasko described the situation, Weis kept his cool, held everything together, and Florida recovered for a 54-32 victory.

“He is extremely intelligent, extremely creative, and I’ll tell ya, one of his best qualities is his poise in adverse situations, which a lot of people don’t usually talk about,” Blasko said. “When things aren’t going particularly well, or you’re at the end of the game in a two-minute situation, he’s the guy you want at the helm. Nothing fazes him.”

Blasko looked up to Weis, and the coaching veteran saw enough in his young assistant to add him to the staff at KU, where Blasko also will serve as the assistant special-teams coordinator. After spending three seasons as a graduate assistant at Akron and one year at Florida, Blasko is grateful to keep working alongside Weis at Kansas.

“There’s not a day goes by where you don’t learn something new,” Blasko said.

Having Blasko around has proven to benefit other offensive assistants. The KU tight ends coach was described as a hard worker by both running-backs coach Reggie Mitchell and wide receivers coach Rob Ianello, and Blasko’s two cohorts said his familiarity with the offense has already proven helpful.

Said Mitchell: “I go in and sit down with him, and I’ll ask him questions. He’s gonna be a really good football coach.”

Ianello, like Weis, has worked on the same staff as Blasko before.

“He studies the game, and I really thought in my time with him at Akron he had a good rapport with the players,” Ianello said. “The players liked him, but he could be hard on them.”

Upon arriving at Kansas, Blasko inherited an inexperienced group of tight ends. Tim Biere, third on the team in receiving yards in 2011, was gone, leaving only Jimmay Mundine and Trent Smiley — eight catches between them last year — as the most accomplished options.

But in April, tight end Mike Ragone transferred to KU from Notre Dame, where he played in 37 games in five seasons (he missed all of 2008 and all but one game in 2011 because of injuries). Ragone has been named to the Mackey Award Watch List.

Blasko expects to use one to three tight ends, depending on the package: “The beauty of Coach Weis’ offense, is it’s so multiple. He builds his offensive system around what his players do well.”

The young coach is looking forward to the chance to coach an offensive unit, especially after toiling as a grad assistant and holding a quality control position.

“I’m just excited about having my own room and having the full-time opportunity,” he said. “It’s why you deprive yourself of all that sleep. It’s why you eat all that junk food.”

This team has the coaching staff and core players to make some noise in the Big 12.

I get more and more fired up the closer we get. My expectation in the W column is tempered, although hopeful, but I think it'll be fun watching our Hawks this year. Stay healthy guys and work hard, you'll be rewarded.

Good article..and we're going to need Weis's poise for sure because we could be playing from behind a lot. Hopefully the players buy into Weis and take on some of this confidence and grit he exubes.

All I can say is, everyone, please be patient.

This season's team could win 6 games....or they could win 2 games, but look for a measure of improvement in all areas. Look for a competitive fire in the entire team.

Look for a team playing to the best of it's ability and if they come up short, at least they will fight till the end. I am afraid that is really all we can ask of Charlie and his staff at this stage of Kansas football.

Even losing can teach a team lessons.....the biggest one , of course, is how much it hurts when you lose and how good it feels when you win!!!