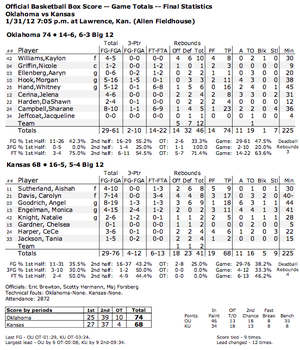 In a game that was played by two teams that stayed within a few buckets of one another all night, the Oklahoma Sooners outlasted the Kansas University women’s basketball team, 74-68, in overtime on Tuesday at Allen Fieldhouse.

KU led 27-25 at the half thanks to a buzzer-beating three-pointer from just inside halfcourt by Angel Goodrich. In the second half, the Jayhawks led by as many as nine points with nine minutes remaining but could not hold on.

In fact, KU needed some heroics just to reach overtime, as junior guard Monica Engelman drained a three-pointer to tie the game at 64 with 5 seconds to play in regulation.

Despite Kansas taking momentum into OT, OU outscored KU 10-4 in the extra period to pull out the conference victory in front of a loud crowd of 2,872.

Being ranked for a day was nice...Fire Bonnie!

Why can't this team win at home?

So, will the KU women's coach now sue for defamation?

That stupid thin-skinned former coach who couldn't win the big one? What a crock that was!