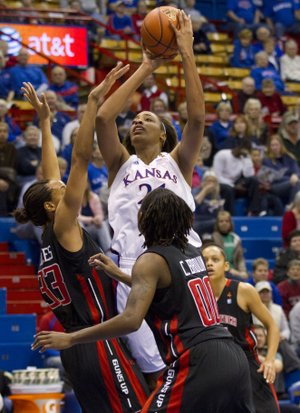 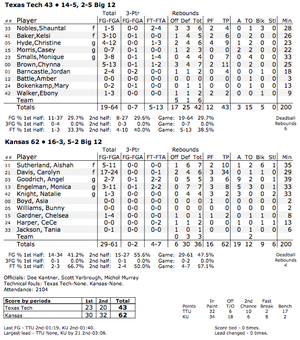 Wednesday afternoon, Kansas University junior Carolyn Davis stopped by the office of KU women’s basketball coach Bonnie Henrickson and was shown a box score from a 2011 game against Texas Tech that revealed that Davis took just five shots in a road loss.

After glancing at the box score and digesting what she saw, Davis asked about the square Henrickson had drawn around the five shot attempts.

“‘Squares are bad, circles are good,’” Henrickson recalled telling Davis. “It was the only mark on the stat sheet and she put it back on my desk and said, ‘I gotcha.’”

A few hours, 24 shots and 34 points later, Davis and the Jayhawks trounced No. 21 Texas Tech, 62-43, to pick up their second victory against a ranked opponent this season.

“Once I saw that, it kind of drove me to play hard tonight,” said Davis when asked about the friendly reminder from her head coach. “It was kind of surprising. I didn’t realize that. I actually thought I played pretty good last year, but obviously not.”

That wasn’t a problem Wednesday. Despite a couple of early misses — Davis was 10-for-17 in the first half and 7-for-7 in the second — the forward from Houston found her rhythm by getting great position, running the floor and converting with confidence.

“She didn’t finish well early, and we talked in the huddle about how she had to take out her frustration on the rim,” Henrickson said.

Added junior guard Angel Goodrich: “I wouldn’t say I’m shocked or anything because we need her to do that. We need her to be who she is.”

Thanks to Wednesday’s performance, Davis is now tops in the Big 12. The 34 points were the most scored by a Big 12 women’s basketball player in a single game this season. KU’s second victory this year over a ranked opponent marked the first time since the 2008-09 season that the Jayhawks had achieved such a feat.

“It feels awesome,” Davis said of her 34 points. “In conference play, against a ranked opponent, that’s when it matters to me most.”

“There’s a thing in the NBA, with high volume scorers, that says for every three points a guy scores, there’s a free throw,” Henrickson said. “That’s the ratio. So for her to have 34 points and none from the free throw line, that’s amazing.”

Davis now has scored more than 30 points in a game seven times in her KU career. Wednesday’s total was four off of her career-high of 38, which she recorded against Duquesne in March of 2011.

While Wednesday’s victory came largely because of Davis’ big night, both Henrickson and her players seemed more pleased, after the game, with the fact that they finally played well against a conference opponent at home. Despite running out to a 5-2 start in league play and sitting in second place, both of KU’s conference losses came at Allen Fieldhouse.

“I thought we got off to a good start finally at home,” Henrickson said. “We talked about that, how we’ve played with a great sense of urgency on the road and built leads and haven’t done that at home. I thought we were really, really good early. We had good rhythm and defensively we were tough.”

“Really where they made their run was in transition, and we got caught standing and watching,” Henrickson said.

“We have a great team this year,” said senior Aishah Sutherland, the only other Jayhawk to score in double digits, with 10. “And we are ready to beat any ranked team that comes to us.”

KU will face its toughest test of the season on Saturday, when the Jayhawks travel to Waco, Texas, to take on No. 1 Baylor and All-American center Brittney Griner

“We just have to prepare to get around Brittney Griner,” Sutherland said. “They have her and a good guard (sophomore Odyssey Sims) and we have to be able to space them out.”

Texas Tech (14-5, 2-5) was without leading scorer and rebounder Kierra Mallard, who missed the game because of injury, and KU was without freshman Donielle Breaux, who Henrickson said quit the team prior to last week’s game at Oklahoma State.

Maybe some of the doubters will start listening to me when I say our Lady Hawks are finding out they have what it takes. Way to go, gals, just remember your fans get greedier with each win. Find a way to make Griner shoot from places she's not comfortable or confident – take her favorite spots away from her before she gets to them. Defend with your feet.

“She didn’t finish well early, and we talked in the huddle about how she had to take out her frustration on the rim,” Henrickson said.

I thought you were going to comment on taking the frustration out on the RIM. Got a chuckle out of that. Any game Brittany Grimer isn't in, the rim doesn't get touched. Not to mention Henrickson taking NBA free throw ratios and equating it to women's college basketball. Totally different game in wcb (more team play, and better use of fundamentals). Good job ladies!

It's too bad there are so many empty seats in the above pictures. It looks like Gallagher-Iba arena last night when Oklahoma State spanked the #2 ranked (hahaha) team in the nation. That may have been the one time that I would have condoned the "over-rated" chant , but if they did chant it, I couldn't hear it.

They started chanting it with around 30 seconds left.

You know it's bad when little kids fill up the student sections. Support your Hawks!

it's a good win.....Bonnie's team took adavantage of TTech not having their leading scorer with them. KU is now ahead of KSU in the standings since the lady kitties lost to Iowa St.

A real rough schedule though coming up: at Baylor, home to OU, at aTm, then home to Texas.....if you go 2-2 in that stretch, that would be awesome....but i think we'd take 1-3. and then it's the revenge game at KSU. i know they're tough there, but my goodness, we're so overdue to beat them. and we CAN beat them.

I was thinking the same thing. Tough stretch coming up and Tech is kind of a mess right now, but I think our magic number stands at 4, giving us at least 20 wins on the year and at least a .500 league mark. Totally doable, :D but Carolyn needs to keep this up because outside of her and Sutherland the rest of the team shot 7-26, 27% and missed both 3 pointers. : /

Congratulations to the players and coaches for another impressive win!!!

KU ladies getting some ESPN.

I didn't realize Goodrich was leading the nation in assists at 7.8/game. She just bolstered that with 9 last night. That's an incredible number for a team that only scored 62 points!

-Sutherland also had 7 boards and 6 blocks. Flirting quietly with a triple.

Great game ladies, but I don't think we'll see too many more like this one, where Davis can dominate inside for 30+ against a team missing their best player. Gonna have to keep finding new ways to win. Engleman will have to shoot better than 3-11, Goodrich better than 2-7 and we're gonna have to find a way to start hitting some threes down the stretch, 0-2.

Now go shock the world! Britney is a real man, but he isn't unbeatable. Find the achilles and take him down!

If what you say is true, kick "him" in the groin..it works every time!!

KGphoto, that is a terrible thing to say about Britney...I have personally met this young lady and she is one of the nicest players that you will ever meet off the court. Don't hate on her for having skills far above what anyone has ever seen before. If our post players can hold up to HER, Brooklyn Pope, Destiny Williams, and most of all Odyssey Sims at the point, then we all can applaud them and feel a sense of accomplishment. Please refrain from the man/name calling, as this is a young with feelings just like our players.

kubiggestfan did not say she never got frustrated and made a big freshman mistake. She is a woman/lady basketball players with skills that are far superior to most women in college basketball and should not be referred to as a man because she has those skills. I think that is not the route that KU fans want to go, i.e., to denigrate an individual because she happens to be very, very good. And then to pull out a utube from two years back...

Not fair, She has apologized over and over for her actions during her freshman year and has matured from it. Britney is the real deal, and we all have to deal with her on the court so no name calling will make it any better for us when she throws down on us.

awesome, ladies!!! it's time to put this team into top 25 ranking - they deserve it more than ever! keep soaring high, lady jayhawks!

Congratulations on the win, ladies. We never doubted your abilities. The jury is still out on HCBH although I will give her +1 for taking advantage of the fact that Tech's starting post/forward and leading scorer did not play last night. However, if you really want to impress me run those same plays and go for 34 against Baylor and the likes of Britney Griner and come away with the win then maybe just maybe I'll concede to Bonnie finally turning the corner in this conference. As it stands right now, Tech did not play well last night and no other team in the Big 12 with the exception of Baylor is consistently playing high caliber basketball this year. But, a win is a win. Keep it up. RCJH Go KU!

Why was Tech ranked before last nights loss? Cupcakes in preseason then Big 12(who isn't this strong) beats up on Currie. Typical since shes been in Lubbock(and she was a much better coach at Purdue than Bonnie at VT).

Nice to see we are winning. BUT ITS A BAD YEAR IN THE BIG 12. Sad Bonnie will keep her job. Really wished Angel would have got a real coach her Senior year(can you imagine her under somone with a clue?)

Good job ladies for the win!

How about all the girls getting a real coach? I have seen kids come into this program with loads of skills and talent, only to see them deminish and deteriorate right before our eyes....X'ing and O'ing them to death rather than letting them play most of the time. It is beyond me when you have five kids on the court and only 2-3 are allowed to shoot/score...I have seen some players go down the court 2 on 1, 3 on 2, and only pass to the ones that have been granted permission to score. Don't think this type of play will take us far....I love the success that the girls are having, but let's be real, the Big 12 teams are not the teams of the past. Aside from Baylor, no one team is standing out in terms of demolishing the competition. If we really want to test our level of improvement, lets not bow out in the first round, like we have done in the WNIT to so called mid-major teams.