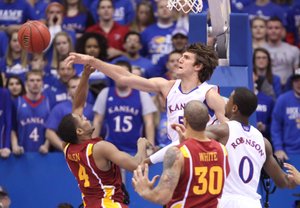 Kansas University forward Thomas Robinson was swarmed so much by Iowa State’s defense Saturday that he didn’t even have a field-goal attempt after halftime.

That didn’t mean he wasn’t a big contributor in the Jayhawks’ 82-73 comeback victory over the Cyclones.

“I was proud of Thomas,” KU coach Bill Self said. “I thought considering the lack of production, the lack of touches, the way they guarded — they put two guys around him all the time — I thought he showed pretty good patience and poise today.”

Robinson’s final line wasn’t overly flashy, at least for what the team has come to expect from him. He posted 11 points on 4-for-10 shooting with 14 rebounds, three blocks and two assists in 32 minutes.

Perhaps his most important number, though, was zero — as in, no turnovers for just the third time this season.

In a fast-paced, high-possession game, Robinson set the tone for KU’s big men, who combined for no turnovers. The Jayhawks had only seven giveaways in all, with four coming from Tyshawn Taylor and the other three coming from Elijah Johnson.

Robinson was pestered all day inside by ISU’s big men, who sagged to help on him. That actually opened up some shots for teammates like Jeff Withey.

“This is just kind of similar to what USC did to me, just keeping a man shadowing me the whole time,” Robinson said. “It was definitely tough, but we have other players on this team, so that’s definitely ... that’s the upside for us, knowing that my team can still play when I’m not performing at the highest level.”

Robinson said he couldn’t get frustrated by hounding defenses like ISU’s, simply because he knows more will be coming.

“I still played pretty well, and Jeff stepped up, and Tyshawn stepped up,” Robinson said. “As long as we got the ‘W,’ that’s all that matters.”

For a while in the second half, Robinson watched from the bench while his team grabbed the momentum.

“I think he was as happy as anybody sitting over there that we got rolling,” Self said.

The next test for Robinson will be Baylor and its talented front line, which includes potential NBA lottery pick Perry Jones III.

“It’s a challenge, definitely with them having length like that,” Robinson said. “But, I mean, they bleed just like we bleed.”

2-6 from the line for TRob (50% for the team) is what really hurt. He'll continue to get banged/hacked by 2nd string bigs if he can't make them pay.

I don't think 6 free throws is sufficient to judge TRob but our team charity performance was troubling being at home.

TRob is strong, but sometimes doesn't fuel his vertical leap with his might to finish the job done. he needs to 'just dunk it' when surrounded under the rim like that. can't be swatted while banking underneath the basket - he's gotta better than that to win POY. plus, he can be a very good sealant for the guards to penetrate inside or awaiting for the drive-n-pass bonus. i like his pass to Withey, that's a very nice play by the two i'd like to see more. sounds like he's ready to face Acy et al. bring it on, Drew!

Thomas has been doing so much lately that a light scoring game obscures what an insanely good rebounded he is!!

Let teams double up on TRob and then bear the consequences of other KU players lighting them up as Tyshawn, Jeff,and others did. I don't think that that ISU anticipated TT''s effort during the second half surge. In effect, this is truly no one man show amongst the starters and now Conner, Kevin, and others are coming off of the bench to contribute. Rock Chalk. Beat the Bears!

It is frustrating to see TRob not get touches, but we do have other scholarship players, so if teams are going to sell out like that and double and triple team him, they're going to have to pay (which ISU did.)

Our guards did have opportunities to get TRob the ball in the second half yesterday, and repeatedly failed to do so. Still, it is hard to be too critical of Tyshawn since he did have the hot hand yesterday, and played a heck of a game. He did throw up some wild shots (some of which went in.)

I'd like to see Tyshawn find a balance between being aggressive and looking to score and being a point guard and doing a better job of distributing. Still, I'll take a game like Tyshawn had yesterday, any time.

When opponents put two or three guys on Robinson, our perimeter shooters should rejoice and drain easy jump shots.

A bird and a bear went out to play on Monday night, it's basketball day Acy was there, with TRob and Jeff the crowd went wild as the tip off went left

TTaylor, and Withey, Releford too ran fast down the court, and scored the first two Acy was open, the pass missed his hands The crowd was an uproar, God bless our fans

With seconds to go, the score was close but we had the lead and gave them their dose Raining threes from on high, and points galore we sent them Bears home, and went looking for more

Big 12 is a hit, the teams are all ranked but show up at our place, and you'll get spanked Bill's boys are real good, and others know it well' when you come to our town, get ready for hell.

PHOF and new poet laureate of board rats.

"It's a challenge, definitely with them having length like that," Robinson said. "But, I mean, they bleed just like we bleed."

I always check out the great photos by Nick Krug: the one above is classic - showing Railey's (who's listed at 250 lbs) upper arm to be about the diameter of TRob's forearm. Granted, he's a back-up. You look at the KU players and you see muscle mass and definition. Credit to the players for all the time put into the weight room and to Dr. Hudy for the plan. Imagine what she could do with Royce White - with most of his 270 lbs below his ribs...it's amazing that he shows the quickness that he does with the caboose he's pulling.

T-Rob, I was proud of your maintaining composure yesterday and cheery response to the big run while you rode the pine. Congrats on the good stats, even on a day when the opposing defense considered you to be the main focus. Your presence and stats are always essential to our wins. Fans are really pumped in anticipation of the Baylor game. I suspect that you and Jeff will unearth some very special chemistry tomorrow night. And, of course, one of your strongest midseason promoters, Dickie the Mouth V. will occupy a mic at The Phog. Best wishes for a super game...and a very important win.

Yeah, and Fran Franschilla (sp), from ESPN, said that if Baylor wants to win the Title, they will need to win this game. Easier said then done. I believe the Jayhawks will rise to the occasion. AFH will be rocking!

Ever since KU got Self Dukie V. has had a personal vendetta against KU. I don't even listen to that clown anymore.