Kansas players Carolyn Davis, left, and Angel Goodrich wait to check into the game against Iowa State on Wednesday, Jan. 11, 2012, at Allen Fieldhouse. 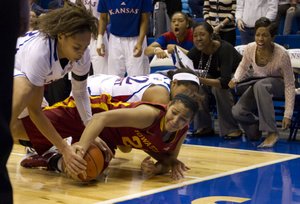 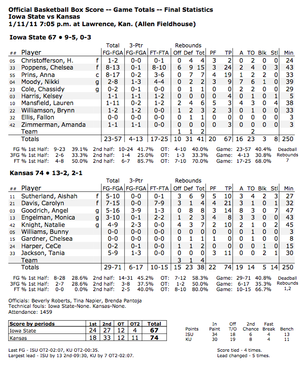 Looks like she was just saving herself for crunch time.

“We ran everything inside to her,” KU coach Bonnie Henrickson said of Davis’ dominance in the final 10 minutes.

Davis, who played just 32 of 50 minutes on the night, including all but a few seconds of the two OTs, was 3-for-5 from the floor and 6-for-7 from the free-throw line during the two extra periods.

“Once it came down to it, I knew I had to take over the game,” a relieved Davis said. “I’ve never had to play that long with four fouls, but I felt good, I felt confident, and I knew I wasn’t going to foul.”

Davis picked up her fourth foul with 11:15 to play in regulation. About a minute earlier, senior forward Aishah Sutherland picked up her fourth on an offensive foul, and the Jayhawks were forced to face one of the Big 12’s most dominant post teams without their top two post players for long spurts. Luckily, sophomore forward Tania Jackson was up to the task of filling in for both of them.

“She was huge,” Henrickson said.

Her effort, along with a scrappy defense that forced ISU (9-5, 0-3) into 23 turnovers, kept the Jayhawks alive long enough for junior guard Angel Goodrich to deliver a little magic.

After ripping off a 17-5 during the final nine minutes of regulation to send the game into overtime, the Jayhawks found themselves trailing by three with 9.4 seconds to play in the first OT. Goodrich, who shot 5-of-16 for the night, rushed the ball up the floor and calmly buried a three-pointer in front of the KU bench that tied the game with just under five seconds to play.

The three-point bomb was Goodrich’s third of the night and came as a result of some extra attention to that part of her game.

“These last couple of days, I’ve been trying to work on (those shots) more,” Goodrich said. “At the end of games like that, everyone’s thinking Mony, Mony, Mony (Monica Engelman), and we need to have other people ready to step up.”

Goodrich’s three-pointer tied the game at 63 and set the stage for Davis to dominate the second OT, which KU won, 11-4.

Davis gave all the credit to Goodrich.

“She played an awesome game,” Davis of Goodrich, who finished with 14 points, eight assists and eight rebounds. “Look at the stat sheet. She filled it up. And she’s done a great job of leading this team all year.”

To call the victory big would be an understatement. After knocking off No. 23 Texas on the road in their conference opener last week, the Jayhawks dropped a home game to in-state rival Kansas State on Saturday. Henrickson said some of KU’s sluggish start on Wednesday was the result of lingering disappointment from that loss.

“It’s hard to believe you feel desperate the third (conference) game in,” Henrickson said. “But we had some of that. You can’t (lose) back-to-back games at home.”

In addition to being “really, really proud” of her team’s never-say-die mentality against the Cyclones, Henrickson said she hoped her players learned a lesson.

“You have to embrace the struggle in this league,” she said. “That’s what it is. Don’t wish it were easier, just wish you were better every night.”

Kansas will hit the road for its next game, an 11:30 a.m. Sunday tipoff at Missouri.

A tough win, and clutch! Congratualtions, ladies. 2-1 and gaining confidence, I think.

Good to read about our ladies doing well. Keep the good coming. RCJH!

I was soooooooo disappointed in the "sluggish" play that I was prepared to get up and leave about midway through the second half. But I decided that if the team needed to stay and finish, so did I. Wow what a terrific ending. Take this confidence and keep moving forward.

I'm disappointed that we don't even mention the one player who played with drive and consistency through the entire 40 minutes of regulation time - Natalie Knight. Nat isn't flashy, but she plays scrappy defense, turned on her her offensive game last night to score the first 5 points of the game when no one seemed to be able to hit the basket, and managed to gather only one foul in spite of very lopsided officiating until the needed intentional fouls to get us into overtime. That kind of consistency and energy by all the girls during regulation might have avoided having to turn it on in double overtime. It turned into an exciting game, but it could have been much more decisive if the upperclassmen could have joined the freshman in the first 10 minutes of the game, instead of turning it on in the last 10 minutes of overtime. Keep the fire going, gals - and kudos to Natalie!

Don't be disappointed, how about the coach better preparing her bench as well....Looked as if there was no confidence whatsoever for her other 6 players. Donielle and Asia should have gotten some minutes as well. We escaped with a win, but it is games like this that will come back and bite us in the butt when we play Baylor, Texas Tech, and as so with K-State, etc.....Live and Die by Five.....Even when some of them aren't playing at their best.

Ladies, keep up the focus and the fight. no games off, no halves off, no minutes off. You're still ahead of the men in winning percentage!! :)

Why you're not ranked is a puzzle??

They lost to Kansas State, that hurt them from getting into the rankings. Beat Missouri on Sunday and they're sure to crack it. (Texas stunned Texas Tech, so their win over the longhorns is looking more impressive too.)

KU has to consistently beat other ranked teams. They will not get there with their non conference schedule. Missouri's not ranked and is currently 0-3 in conference play so I don't think beating them will cut it. However, beat Baylor (1), Tech (10) or A & M (12) and they could possibly do it.

Not much you can do though. You play the schedule you are given. Not our fault (@)Mizzou and (@)Oklahoma State are the next two opponents and both are unranked.

However, that should give Kansas the opportunity to go 4-1 in Conference Play... before taking on Texas A&M, Texas Tech, and at Baylor in that order...

Either way, let's see some wins, and then some upsets!

Way to pull it out and get the win, ladies. Still questioning the coaching though. In particular, can anyone tell me why our bench is not better prepared to play than they were last night. I mean was it just me or did they look like Bonnie told them to pass the ball around, run the clock, and get us into half time so she can get her starters back in and that's it. What a waste of a good nine minutes and one could argue that it contributed to having to go into double overtime to get the win.

It makes more sense to me to develop everyone on the team so that if the time ever comes where the bench has to play "like last night" they will be ready and able to produce. I mean what a waste of all that talent. I keep trying to give ole Bonniekins the benefit of the doubt thinking she will regroup and finally get our team to the big dance, I...I just don't know. KU can have all the talent in the world (and has had it the last couple of years) but if the leadership is suspect......but I digress.

Some games are just ugly...the energy wasn't there to start but they gutted it out and pulled it off. I agree that Natalie deserves huge props for her consistent play...she was a 1st half leader as a Freshman. I think Natalie's level headed playing and focus is something Monica can learn from; Monica has the ability to be a great player but is only average because she lets every mistake haunt her. Carolyn, Angel and Aishah did what upper classmen should do in the OT's and last few mins of regulation. Good use of Ms. Jackson to bring energy and emotion to the game; that energy spark is huge and a must see for the crowd to get back into it as well. Hats off to the Lady 'Hawks for digging deep and taking this one.

Why does everyone need a PAT on the back, just come out and play ball each and every night and the stats willl show. If your are looking for the noble fans and writers to gloat after each game, get over it.....With Keena gone, someone else has to step up, and with the number of minutes the freshman is getting, she has to bring something. Long time Coming! When it is all said and done, lets save it all for the Big Dance.....IF WE MAKE IT !

As for Monica, she is doing what her coach wants her to do, and that is shoot, shoot, shoot. Monica has the best shot on the team and when a coach loses confidence in you, it is hard for a player to get it back. I Wish everyone would just see things for what they are.....coaching, coaching, coaching, or lack of !

Coach's comment on "embracing the struggle" might be the smartest thing I've ever heard from her. That comment really resonates and I hope the girls take it to heart. Keep it up, ladies!!

Haven't anyone heard of politics in sports? I know I read a article earlier this year that Natalie Knight is the daughter or relative of pass KU athletes. Didn't her father, uncle, cousin the entire family play at KU? I am sure with HCBH job on the line she is thinking this family would have a great impact on her job if Natalie did not play. True, I have not had the opportunity to see the other freshmen (guards) due to them not receiving playing time. I cannot say what they can or cannot do? I do believe they can contribute more then 2 pts., 2 assts., 1 rebound per game, playing as much as Natalie does if given the opportunity. Turnovers? When you go to the corner and throw the ball into Carolyn or back to Angel kinda hard to have turnovers.

Not being negative toward any of the players on the team. I am not impressed with her performance coming in as a starting freshman and getting as many minutes as she is getting. She is not Kaleena Lewis or a Bria Hartley. I believe Natalie is playing up to her potential. With HCBH nothing surprises me with her coaching techniques.

What is the saying....Money talks, BS walk or in the other freshmen guards case sit the bench.