Kansas to face A&M or OU in tourney 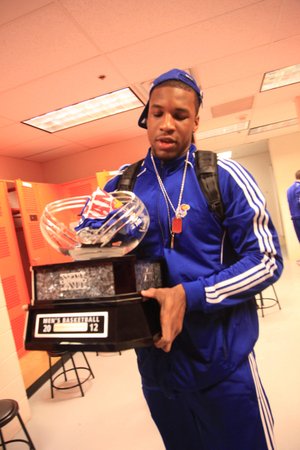 KU coach Bill Self talks to reporters following the Jayhawks' 70-58 victory over Oklahoma State on Feb. 27, 2012.

Stillwater, Okla. — Big 12 officials indicated that as No. 1 seed in the upcoming Big 12 Tournament, KU will meet either Oklahoma or Texas A&M at 2 p.m. a week from Thursday in Sprint Center in Kansas City, Mo.

Withey rebound goes awry: A crazy thing happened with 1:23 left. Keiton Page missed the front end of a 1-and-1. Jeff Withey rebounded and tossed the ball to a ref, who was out of bounds. OSU received possession of the ball on the inbounds.

“If the game had ended different, he wouldn’t have ended well. His players would have jumped his butt,” KU coach Bill Self said with a laugh, referring to Withey. “That wouldn’t be ESPN Top Ten. It would have been No. 1 (play of the day). I’ve never seen that happen in a game, a player get a rebound and tosses it back to the official (live). That is unbelievable.”

Withey said: “I got the rebound. I looked up. Everybody was standing still. I thought it was two shots. I threw it to the ref. He backed up. I felt so dumb, but I can’t take it back. All I can do is laugh about it and be happy we won the Big 12.”

Robinson honored again: KU junor forward Thomas Robinson on Monday was named Big 12 Player of the Week for the fourth time this season.

Robinson scored 28 points and grabbed 12 rebounds in Saturday’s 87-86 overtime victory over Missouri. He had 18 points in the second half and overtime. His block of Phil Pressey’s inside shot with two ticks left forced overtime.

All of the previous four-time honorees were named Big 12 Player of the Year.

Day of rest: The Jayhawks practiced just 15 minutes Sunday — the day after the MU game — before the four-hour bus ride to Stillwater.

“That game Saturday (emotional overtime win) certainly took a lot out of everybody,” Self said on Monday’s coaches call. “We came off that emotional high on Sunday. We really weren’t able to practice yesterday. We were a tired team.”

“We practiced 15 minutes, saw that wasn’t going anywhere, then got on the bus and drove four hours down here.

“With Saturday/Monday games, we never practice more than 45 minutes to an hour anyway,” Self added. “It was a draining deal. Fortunately we won. Not winning ... that game in the fashion in which it was played would have been very very hard to have this recovery time. That’s life. In the NCAA Tournament we practiced 18 minutes on Sunday when we played Memphis (Monday). This is nothing unusual.”

Nash to stay?: LeBryan Nash, the former Dallas Lincoln High standout who was ranked No. 6 in the country in the recruiting Class of 2011 by Rivals.com, tells the Daily Oklahoman he’s “70 percent sure” he’ll be returning for his sophomore season at Oklahoma State.

“I feel I’m not having a big (enough) year to go to the NBA. I really feel like I could come back and really make an impact,” said the 6-foot-7, 230-pound Nash, who chose OSU over Kansas and Baylor in recruiting. “I’m just going by this season right now. I just keep playing right now. I’m not really looking at the NBA.”

Draftexpress.com projects Nash as the final pick of the first round of the 2012 Draft.

He was unable to play Monday because of a fractured bone in his left hand.

It's actually refreshing to read about a kid (Nash) who understands that he needs some more time in college. Nothing wrong with that IMO. Get your hand corrected and work on your weaknesses over the summer. He's a good kid and he's obviously getting some good advice.

Note: I still think his orange hat ceremon when he chose OSU was hilarious.

I can't believe he is even thinking about leaving at all. I'm glad we didn't get this kid if that's the case. If he would have come here, it would stand to reason that he would have had a better year and might have left us after one year. We haves no use for OAD's.

McDonald's AA Marcus Smart signed with OSU (he plays here in my backyard) - another one that turned down HCBS. Next year will be interesting to watch them.

I hope we play Texas A&M and beat the crap out of them. I am not usually a spiteful fan, but I would love to be up by about 30 with our starters in and shooting 3 pointers until the clock runs out.

Actually, OU and T A&M play each other for the opportunity to play us. I'm hoping that OU beats them and sends them on their way. Nothing like being picked co-favorites for the league and finishing tied for second to the last.

I'm sure I'm missing something here, but why wouldn't we be seeded against Texas Tech?

Thanks to both of you.

When will the big12 rename the conference trophy the jayhawk award or self trophy?

Not bad for an off year.

I get a kick out of the MU fans. Their best year in 20 and they act like they're so much better than KU. What makes it even better, we're projected to have our worst year and MU their best year in 20 years and we win the conference outright and should end up more highly ranked than MU.

Thanks for reposting that. Geezus that is the most embarrassing video I've seen, maybe ever. LMAO. Good riddance to those flippin tools.

Shortly after that there is the reference to the "title race" ... oops.

And then the dropping in the rankings reference ... oops.

And then around 1:10 there's the Pressey drive reference ... oops.

They say that it was removed for Missouri Policy...I think they removed it because all of the things in the song were inaccurate.

Thanks, marchphog, I hadn't seen that before.

Wow, lame doesn't begin to describe it -- maybe a whole new level of lameness. I love that it has far more dislikes than likes.

You really almost have to feel sorry for the imbeciles -- note the word "almost."

Thanks for posting, marchphog88. That was HILARIOUS!!!

Thank you for that! That is hilarious, lol

I loathe and detest the conference tourney but we can't let mizwho win their last conference game ever.

They will lose prior to the championship. 1) They will most likely lose to KSU again if they play them again, but It'll be interesting when they have to play a back to back game.

It'll be interesting to see how we do in a back-to-back as well. We definitely aren't as deep and in these conference games where you play back-to-back to get to the last game, that 3rd game (and possibly 4) games is rough on any team.

thats a really good point. We've been playing two games a week now for a long time and for the most part its been Wednesday and Saturday, which is a good rest for a team like this. It will be very interesting to see how the quick turnaround and hard fought games affect our team with our lack of depth. It will also be good preparation for the NCAAs though because at least there you get one day. I dont know why, but I have a feeling someone like KState or Iowa State is going to win the tourney but my money is on the Hawks

I really can't blame Withey too much for tossing that rebound back to the ref. NO ONE went after it, so clearly the official didn't make it completely clear it was a 1-and-1, or everyone was just coincidentally not paying attention. Hell, I didn't even know it was a 1-and-1, and was confused when Page only shot one free throw and suddenly OSU had the ball book.

Actually the official did signal 1-1, just no one was listening again. I was surprised no one went after it, but when Withey threw it out of bounds you knew it was an error, but what could you do. I think everyone was also surprised that Keiton Page a 86% FT shooter missed the one that would give him 30 points.

Hehe, fair enough. I've seen instances before where a few or even most of the guys don't realize it's a 1-and-1 and don't go for the rebound, but that's probably the only time I've seen everyone not know, haha.

This was even more funny than Brady Morningstar's flubbed free throw where the ball came out of his hands and he had to fling it at the basket as he was falling over the line. Luckily neither error affected the game outcome.

There was a post on ESPN that stated that KU is the frontrunner for Shabazz now. He was amazed at what he saw; however, he is going to UNC/Duke this Saturday. Hopefully, the game is a blowout with no overtime and the crowd goes quiet about 15 minutes into the game...that will have a lasting effect.

That would be an awesome get, to get him over the ACC bluebloods. I too hope for a blowout, or something close. Maybe also with them both recruiting him, it will be like two MVP candidates on the same team splitting votes. Hopefully this game's benefits will continue.

If I had a choice, I would rather face Oklahoma. A&M can be a pain in the side. Whoever we face, we should have all cylinders firing.