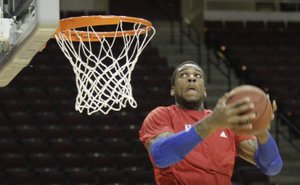 The Texas A&M coach figured putting more defensive attention on Kansas University forward Thomas Robinson would give his team the best chance against the Jayhawks.

As a result, KU guard Elijah Johnson broke free for 21 points on 7-for-11 shooting in the Jayhawks’ 66-58 victory Wednesday night.

“That’s the mark of a good team that’s got talented players. Elijah Johnson’s a good player,” Kennedy said. “We took a chance to try to take Robinson away and leave (Johnson) open. He was struggling from the three the last five games — really was struggling. He’s a good player, and he stepped up and made shots.”

“You can’t give Kansas a 20-point lead on your home court and expect to play perfect and come back and win,” Kennedy said. “The only thing I would say is that we didn’t throw in the towel. We had opportunities to cash it in, and we battled a little bit.”

Texas A&M made a run with a smaller lineup, moving Khris Middleton to the power forward spot to create a mismatch.

The result was Middleton’s scoring 23 points — the most he’d had in a game since scoring 24 against Louisiana-Monroe on Dec. 10.

Kennedy said the one of the biggest turning points came then, as KU guard Tyshawn Taylor drove to the basket, making a shot off the glass while drawing a blocking foul on A&M’s Zach Kinsley. Taylor added the free throw to push KU’s advantage back to seven.

“I thought it was a charge, but I didn’t see it,” Kennedy said. “We just didn’t get a break. We needed some breaks. I didn’t think we had some things go our way, but you make your own breaks, too.”

Though A&M had a chance to win late, it didn’t help itself with a poor offensive performance in the first half.

The Aggies went just 9-for-31 in the opening 20 minutes (29 percent) while attempting only one free throw.

“We just didn’t take smart shots,” A&M point guard Dash Harris said. “We rushed up quick shots that weren’t good looks, weren’t good team looks. It put us in a hole. Like I just told my teammates, we can’t play against a Top-10 team — or any teams — playing from behind like that.”

Even though A&M ended up shooting 50 percent from the floor in the second half (12 of 24), Kennedy admitted it wasn’t his team’s most graceful effort.

“We’re sorry y’all had to watch that,” Kennedy said. “It was an ugly game. Fortunately both teams were ugly.”

"I thought it was a charge, but I didn't see it." That makes sense?

Yeah, it means when he watched the play he thought it was a charge, but he didn't get a good enough look at it to whine about the call.

I recorded the game and haven't watched it yet, can anyone tell me why releford didn't start? On espn stats it shows teahan as a starter. Wasn't sure if it was because of Travis injury or just a typo.

Must have been an error, right now it shows Releford as the starter, he played about as much as Teahan.

Releford should always get double Teahan minutes... boggles my mind

Travis and EJ did all our scoring through the first few minutes of the game. If he was not out there for the opening jump, he certainly did show up pronto.

It was Teahan who almost proved coach Kennedy right. 0-6 FG was really ugly. I am not sure why coach Self went with him down the stretch except he can get free throws and few others can. Now don't get me wrong. I like Conner. But usually coach uses the hot hands toward the end of the game. This game that was not Conner.

we all "like" Conner as a man ... but he is not close to the top six players on this team.. pick up the defense and Young would be way better 6th option... face it our starters are the five we need to get 30 minutes a man in tourney to win.. would like to see Releford , TT and EJ get 33+ in tourney

Our chances with Julius Randle look slim :( Read his blogs listed on ESPN Recruiting section, and he has never mentioned Bill Self in any of his blogs. He may be leaning towards either Duke, Kentucky or North Carolina :(

Dude! I'm posting about the POY poll on as many articles as I can and you posted about Randle on all of them too! Feel real strong about not getting him, huh?!

POY poll up on cbssports.com home page. Vote for T-Rob!

Both committed after the early signing period, so they can't technically sign until after the season is over. With Adams my understanding is that his scholarship was conditional on him academically qualifying, which was somewhat in question at the time of his committment.