In this file photo from Jan. 21, 2012, Kansas University guard Angel Goodrich, left, looks to pass to a teammate as she hangs in the air. Goodrich became the KU single-season assists leader with her 208th assist vs. Texas Tech on Tuesday, Feb. 21, 2012 in Lubbock, Texas. 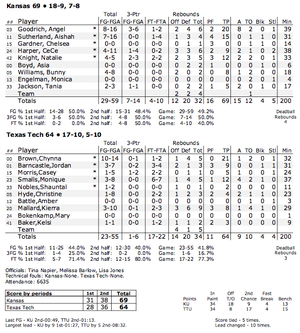 Lubbock, Texas — Kansas University’s Angel Goodrich led the KU women’s basketball team to a road victory against Texas Tech Tuesday night, and the junior guard did it in record-breaking style.

Goodrich’s eight assists broke the KU single-season assist record, while her team-high 20 points pushed the Jayhawks past the Lady Raiders, 69-64. 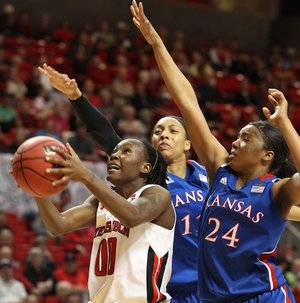 Goodrich, who also had a team-high six rebounds, shot the Jayhawks into the lead early, scoring 15 of her points in a back-and-forth first half. Kansas, led by a trio of Goodrich three-pointers at the end of the half, led Texas Tech, 31-28 at the intermission.

The Lady Raiders (17-10, 5-10) came back to take the lead with 12:31 left in the second half, but freshman Natalie Knight (12 points, five rebounds) fired off two straight three-pointers to tie and overtake Tech with just under seven minutes to go. Goodrich’s record-breaking eighth assist came on a Tania Jackson three-pointer that pushed KU’s advantage to 64-58 with 2:46 left. That pass gave Goodrich 208 career assists — one better than former Jayhawk Lisa Braddy, who finished with 207 in the 1987-88 season.

The Jayhawks will take on No. 1 Baylor at 6:30 p.m., Friday at Allen Fieldhouse. The game will be broadcast on FSN.

The award honors the top point guard in all of Division I women’s basketball, and focuses on “floor leadership, play-making and ball-handling skills that personified Hall of Famer, Nancy Lieberman during her career,” according to the Rotary Club of Detroit’s website.

Goodrich is one of eight semifinalists. Three finalists and a winner will be chosen during the Final Four weekend, April 1-8.

Before Tuesday’s game against Texas Tech, Goodrich averaged 12.5 points, 3.7 rebounds, 7.7 assists and 2.8 steals per game. Her assists-per-game rank second in the nation.

Baylor’s Odyssey Sims is also among the nominees.

Unless you read the caption of the photo, you don't find out how many assists Goodrich had to break the record until the last sentence of the 5th paragraph. Top notch journalism.

It's in the 2nd paragraph too

Does anyone know why Monica only played 4 minutes?????

Well, she did turn it over twice in that 4 minutes. I didn't watch the game so I don't know, but that's never good. Part of it might be that Natalie Knight is playing so well. 12 points off 4-5 shooting and 2-3 three pointers. 5 rebounds, 2 assists a steal and hit both her free throws in 33 minutes. She's a big reason we won last night. You're from Olathe, you should be a big fan of hers too. I am.

By the way there has to be a better way of posting these stats. They look like they were Xeroxed on a machine with low toner.

Magic number is 2. I'm getting nervous!

Great that you love your hometown girl, but she was not a big reason we won last night, she was a part of it, just like all 8 others. Angel played BIG, Natalie played well, Bunny WIlliams played well, CeCe Harper played well, Tania Jackson played well, Aishah was her normal self (always in the mix of things). The BIG REASON for the win last night was Defense and not turning the ball over as much as we have in the past. If you noticed, all of the guards were allowed to bring the ball up the court, thus allowing for more free flow of the game. As I have said over and over, DEFENSE WINS GAMES, OFFENSE SELLS TICKETS. If we are going to get to the BIG DANCE, we have got to continue to employ our entire bench and allow them to play without shackles on. Had we employed this all season, we would have only one loss in conference to Baylor. Oh well, let's go get Baylor on Friday....As a Team!

She will be back...Can't keep a good shooter down for long!

She will be back.....Can't keep a good shooter down for long was meant for this post. Keep your head up Monica.

Don't know and don't care. We won!!! Are you're looking for another way to bash Bonnie??

No! Thrilled they won! Just have a daughter who is a huge Monica fan...that is all!

The kid accomplishes something special, and you're worried about where the stat appears in the story??

CONGRATULATIONS LADIES!!! CONGRATULATIONS COACHING STAFF!!! Coach H lets keep the same game plan against Baylor and let the guards push that ball and get fast break points. Let's do the same thing to them that they did to KU in Baylor. They put pressure defense on Angel to make it hard for her to get the ball up the court, so let our defense specialist (#24) put pressure defense on Baylor's point guard and make it hard for her to get it up the court and into to the post players. Again everyone playing defense and KU can give Baylor something to think about and a trip to the NCAA. They have the talent and the heart to do it. Coach H please don't have the players going into the game playing timid and thinking they can't win. If Texas Tech only lost by 5, then we can shock them. GO KU!!!!!!!!

Doggone it, with proper coaching, this team could have been 22-5 at least, with a winning league record and everybody still on the team.

Oh well....nice gutsy victory, LadyHawks. The Big Dance is still out there for you!!