Kansas center Jeff Withey dunks off an alley-oop from teammate Tyshawn Taylor against Kansas State during the first half on Monday, Feb. 13, 2012 at Bramlage Coliseum. 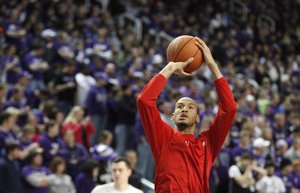 Kansas coach Bill Self talks to reporters following the Jayhawks' 59-53 victory over Kansas State on Feb. 13, 2012.

Manhattan — Kansas University junior center Jeff Withey nearly had a triple-double on the same day he was named Big 12 player of the week.

The 7-footer from San Diego earned top-conference-player honors in a vote of media covering the league. It marks the first conference weekly accolade for Withey and sixth time in 2011-12 that a Jayhawk has earned mention.

Withey — who scored a career-high 25 points against Baylor and grabbed a career-best 20 rebounds against Oklahoma State — joins Thomas Robinson, Tyshawn Taylor and Travis Releford in earning player-of-the-week honors this season. Robinson has won the award three times, while Taylor, Releford and Withey won once each this season.

This is the first time in conference history four players from the same school have been named player of the week in the same season.

“He had a fabulous week,” KU coach Bill Self said. “Guys who play well a week or have a big game have to learn to sustain over time. Hopefully, he’ll sustain that over time.”

Of Withey’s play this season, Self said: “The reality is, he’s gotten more aggressive, not near as aggressive as what I’d like. He has taken pressure off Thomas, and they are playing well together.

“He’s starting to believe he’s good,” Self added of Withey, who entered Monday’s game at K-State with a 9.2 scoring, 6.3 rebound average with a league-best 79 blocked shots.

Iowa State guard Chris Allen was rookie of the week.

’Cat scratch: Withey had a long scratch on his left arm after the game. “It was a physical game,” he said with a smile. “I got hit in the face a couple times, too.”

Cousy talk: Self said he’d spoken with Cousy Award officials, and there’s a chance senior Tyshawn Taylor could be added to the list of finalists at the end of this month. The Cousy Award goes to the country’s top point guard.

“They’re going to review it,” Self said of the ballot possibly including his senior leader, who had 20 points, five assists and three turnovers in 37 minutes versus the Wildcats and, according to Self, has been playing as well as anybody in the Big 12 for a prolonged period of time.

Gimmick ‘D’: KU used a triangle-and-two defense the second half. KSU didn’t score for almost seven minutes in the span.

“We used it before when they had (Denis) Clemente and (Jacob) Pullen,” Taylor said. “We pulled it out when they had (Will) Spradling and (Rodney) McGruder in the game.”

&$#@*&^!: KSU coach Frank Martin followed up with his letter to students in which he asked the fans to refrain from profanity in their chants in the stands. He was shown in a video to the students shortly after they were seated about 6:20 p.m. Monday. One problem: Several Jayhawks jogged onto the court to shoot, and boos drowned out the video through its duration.

Triple-double waiting to happen. Wonder if Vegas gives odds on it happening? I'd almost take the bet.

Also, wonder if Withey can earn "Player of the Week" two weeks in a row? He's got a good start.

With TRob, TT and Withey, KU could put a strangle hold on it to end the season. Just trade it around between them.

How insane would it be to have the Player of the Year and the Cousy award winner on the same team?

They said during the game that it wasn't that unusual for them to add players later in the season. It makes sense; how could they base the finalists on just the first two-thirds of the season, especially when the most important games are played during the last two months?

It never ceases to amaze me how much the Kansas coaching staff gets out of their players at KU. EVERYONE said this was going to be a rebuilding year. The Jeff Withey transformation, Tyshawn's great play, T-Rob, the list goes on. I love this team and coaching staff. Bill Self for President and Danny Manning as his running mate!

Love the avatar...bring back "mean" jayhawk.

Everyone talks about the JW transformation, but the big transformation is the TRob. He went from a solid 6th man, that was prone to fouls and couldn't score. he was a great rebounder. Now he is POY can score out of double/triple teams and he grabs every rebound. His FT shooting is up and he has limited his foul trouble. Last year he would have 4 fouls in about 7-9 minutes. Now he is playing 30 min+ per game and usually is not in foul trouble. I think he fouled out of 1 game this year and he has had to ride the pine a couple of first halves because of a quick foul.

I hope they review the tape of the game to make sure he got credit for every block. I'm guessing they probably got it right, but I'd want to make sure. Great performance!

I hope they review the tape of the game to make sure he got credit for every block. I'm guessing they probably got it right, but I'd want to make sure. Great performance!

Wow, I never thought Withey would come close to having as good a game as Cole's triple-double. I don't think words can describe just how much Jeff Withey is over-achieving right now.

Actually, he is making it look pretty effortless. It is looking more like achieving than over-achieving at the moment. He has such great hands it creates so many scoring and rebounding opportunities.

Actually, he is making it look pretty effortless. It is looking more like achieving than over-achieving at the moment. He has such great hands it creates so many scoring and rebounding opportunities.

I swear I saw him get a few more blocks - at one point in the first half, they credited 2 and I swear he had 4 or 5. RECOUNT!

^^^^not only do I feel like he had more last night. I could have sworn he had 7 blocks just in the second half against OSU, but they only gave him 7 for the game.

Thats it in a nut shell.

I know we've been saying this for 3 years now but after what we've seen these last few weeks its worth bringing up again:

Just imagine how high the celeing could be for Withey next year if Huddy is finanly able to put some meat on his bones over the off season.

Classy move on Self's part to fight for Tyshawn to be on the Cousy ballot. Gotta love a head coach fighting for you until the bloody end. rcjhgoku!