Bill Self: KU rebounds nicely from loss to MU

Coach Bill Self yells instructions to his team in the second half of the Jayhawks 68-54 win over the Baylor Bears, Wednesday, Feb. 8, 2012 at Baylor. 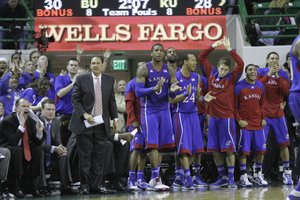 Kansas coach Bill Self talks to reporters following the Jayhawks' 68-54 victory over Baylor on Feb. 8, 2012.

Waco, Texas — Bill Self loves the way his Kansas University basketball team has bounced back from Saturday’s deflating loss at Missouri.

“The kids put a lot into that game. To play so well and come up empty is obviously deflating,” Self said of his team’s blowing an eight-point lead late in a 74-71 setback to the Tigers.

“These guys ... I’ll be honest, they showed me something,” he added after Wednesday’s 68-54 victory at Baylor. “I didn’t think our energy level was very good today (at shootaround). I didn’t think it was great yesterday. I thought we might pout up and feel sorry for ourselves.

“We showed some toughness. Take away three minutes in the last 80, that’s about as well as a team we’ve had at Kansas play on the road since I’ve been there ... against two Top-10 teams, but the three minutes obviously cost us a game.”

Streak alive: KU has gone 228 games without consecutive losses, which is the longest active streak in NCAA Division I. KU’s last two straight losses were Jan. 14 vs. Kansas State (59-57 in Allen Fieldhouse) and Jan. 16 at Missouri (89-86 overtime in Mizzou Arena) during the 2005-06 season.

“I did not know that until recently,” Self said. “The thing that amazes me in basketball, in league play it’s all about momentum. You can’t let one become two or two become three. These kids have done a great job. I can’t remember the last time we lost two in a row. Of all the things these teams have accomplished, that may be one of the more impressive ones.”

Elbow: BU’s Quincy Miller was called for a flagrant foul in the second half after elbowing Jeff Withey in the chest. Withey hit one of two free throws, and KU scored on the ensuing possession to give KU a 43-32 lead. Self could have had anybody shoot the free throws, but said he chose Withey to see how he’d fare with nobody else standing at the free-throw line. Self said he could choose Withey or Tyshawn Taylor to shoot free throws down the line in similar situations.

“We wouldn’t have been out of it if we lost, but it’d be an uphill climb,” Self said of the league race.

... Self said Conner Teahan’s minutes (22) rivaled that of starter Travis Releford (24) because he felt Teahan was playing better offensively and would be better against the BU zone . ... Former KU forward Archie Marshall, who lives in Dallas, attended.

Frankamp over 40 points again: Future KU guard Conner Frankamp scored a season-high 48 points to lift Wichita North to a 61-42 victory over Wichita Carroll on Tuesday night. It was the fourth time this season the junior has scored more than 40 points in a game.

“We tried to bring two people. We tried to deny him. Maybe next year we’ll try to guard him with five people,” Carroll coach Lonnie Lollar told the Wichita Eagle.

Markieff in rising stars game: Former KU forward Markieff Morris of the Phoenix Suns will play in the 2012 BBVA Rising Stars Challenge on Feb. 24 in conjunction with 2012 NBA All-Star Weekend in Orlando, Fla.

The 6-10 Morris is averaging 7.2 points and 5.2 rebounds while logging 20.6 minutes per game in 25 games. He leads all rookies in three-point percentage (.460), which is seventh-best in the NBA overall. He ranks eighth among first-year players in scoring.

Participants were selected by the NBA’s assistant coaches, with each team submitting one ballot. This year, a new format is being implemented to a game that has featured NBA rookies competing against sophomores. For the first time, rookies and sophomores will be mixed together on teams. TNT analysts Charles Barkley and Shaquille O’Neal will serve as the general managers of the two opposing teams.

Seemed like Coach was extra careful not to blow a big late lead in this one. He left the starters in til the end even though they were clearly gassed. Lots of KU turnovers in the final minutes as the fatigue was showing.

Coach could have called a timeout when were gassed, but it is not cool to do that on the road with a lop-sided score. Fizzou and the Kitties are the obvious exceptions to that unwritten rule. Coach did the classy thing and it was good for our guys, too.

He was waiting for the TV timeout. There just wasn't a dead ball for a long time.

I always believed it was an unwritten rule that the loser raised the white flag by taking out their starters and putting in subs, at which point the winner does likewise. Drew never did that, so Self didn't either. In fact, Baylor was still trying to get the ball when KU was dribbling out the last four or five seconds. That Drew. When does "competitor" leave off and "bad sport" take over.

Anyone know the all-time NCAA record for not posting back to back losses?

Frankamp out scored the other team!

Congratulations to Perry Ellis on making the East Team roster for the McDonald’s All American game!

Archie Marshall!!!!!!! The guy was a stud! Man, if that guy doesn't blow out his knee in the 86 Final 4 against Duke................Kansas wins a National Championship against Louisville IMO. Him going down late in that game completely shifted the momentum.

One of the greatest moments in KU history - senior night, 1988 (my last game in AFH) - KU vs. OkSt. With a few seconds left and the game easily won, Larry puts in Archie who could barely walk, gets in and stands just a few steps in front where he was standing. The ball is inbounded straight to Archie and he launches a 3 which bounces off the rim. To his credit, Sutton and his players give Archie the room to take that shot. Good for AFH the shot missed because I am sure the roof would have literally tore off it had gone in. The term everyone is looking for all round is "CLASS". Archie embodies that class, a genuinely nice human being.

Holy Cow! Great memory! I totally forgot about that! Thanks for reminding me! That would be awesome if we could find footage of that moment! That was truly a "Goosebump" moment.

I was thinking the same thing and was there as well, zsn. A special moment in KU history no doubt.

p.s. I think Leonard Hamilton was the OSU coach that year.

p.s.s. You need to get back to a game there sometime soon!

I stand corrected on the p.s. On the other one, it just hasn't worked out....I moved out the East Coast, and then all the way across the country. I have seen KU games in person since, but just haven't been back in Lawrence. Perhaps get my kids there so they can finally realize why dad is suddenly a different person when a KU game is on ESPN! They partially experienced at the Cal game last year, but Haas is NOT AFH

That '86 team was special, and Archie was one of the big reasons.

I like what I have read about Frankamp and Ellis. Would be advantageous for both of those kids to attend summer camps which focused primarily on footmoving defense. Considering their scoring talents, it would be a real joy to see each of them plug right in to thrive in the Jayhawk system upon their arrivals in Lawrence. Obviously, their offense is already in place.

"Would be advantageous for both of those kids to attend summer camps which focused primarily on footmoving defense."

Have you see either one play? Where do you get this idea that they have a problem moving their feet on defense?

Or are you just assuming that since they are putting up good offensive numbers that they can't play sound, position defense?

You got me drooling.

Great Post, thanks. Maybe Frankamp can come to KU this summer and meet Hudy and get a few workout ideas.

Congratulations to Markieff on the superfrosh NBA season. Here's hoping to see Marcus doing well on the Rockets roster by this time next season. I'm spending the month in the Rio Grande Valley, and hope to see him play at least once, now that his ankle is on the mend, down here in the D-league.

“We tried to bring two people. We tried to deny him. Maybe next year we’ll try to guard him with five people,” Carroll coach Lonnie Lollar told the Wichita Eagle.

I can't wait to see our Kansas kids suit up soon!

Totally agree if this kid can continue to shoot in college the way he does in HS it should be a treat to watch.

Love the fact that Archie was on hand last night. Just shows you the connection our former players have to our great Alma Mater. IMO HCBS has created a culture in which former KU players feel very welcomed and embraced when they return. That speaks volumes for the richness of our history, tradition and lore in college basketball!

Hope Frankamp and Ellis bring the scoring momentum to college level. Imagine to have a player scores 40 for KU. Easier to teach defense than offense to young players. It will be some adjustments for them for sure.

What a "down" year. ;) I like this team in the tournament. They don't give up.

I livie in Dallas with lots of Baylor friends. They are very much aware of the Kansas basketball tradition and quality, even in a year with less talent than normally seen. One Baylor fan told me that he was only hoping for a home win last night, fully realizing his beloved Bears were play KANSAS.

There is an aura to Kansas basketball that transcends the game, whether played against Scott Drew's talent ladden team or vitually any school (with the few notible programs). It doesn't guarantee wins every night of course, but even my Texas friends recognize and appreciate the Kansas tradition which spans over 100 years!

I can't speak for Drew, but there are a lot of Big 12 fans who admire and envy Bill Self and the Jayhawk program. I'm one Jayhawk who appreciates what Kansas basketball continues to do with arguably one of the top 5 coaches in the entire country, and there's not one of those other 4 coaches who work in the Big 12.

I live in Missouri among lots of neighbors, former co-workers and coaching cohorts who are dyed in the wool Tiger fans and supporters. Even the most vehement anti-Kansas sportsfans reluctantly admit to utmost respect for the dreaded Jayhawk when Big 12/Big 8 basketball is discussed. The Kansas hoops tradition spreads its aura far and wide in the Heartland. Bill Self is recognized as a rare competitive force who bears the gentlemanly quality of social grace and wise choice of quotable speech to accompany his fierce determination to avoid defeat. The antithesis of a coach who embarrasses his program by pulling players off the floor in direspect of a league competitor's pregame video highlights. In this past quarter century, Larry Brown and Roy Williams did much to re-establish and elevate the spirit and power of Kansas basketball. Bill Self has taken the program to greater heights.

this kansas team makes me proud .unlike some of pass team , they play .with so much heart.