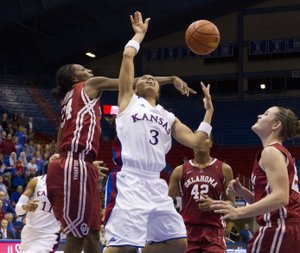 Ugh, Bonnie Ball, KU lost 3 of 4 home games and should have beat KSU and OU at AFH.

Go ahead, give her another $1.3 million retention bonus like she was paid in 2009 - - like everyone was knocking on the door to hire her away from KU! Oh crap, she did get another $300,000 after-tax retention bonus in 2011! Thats good money that could have been used to pay off Turner Gill.

Another great decision by Lew, you are supposed to pay her $1.3 million to go away.

In 7 coaching years, never taken KU to the NCAA tourney, never finished higher than 7th place in Big 12, and never better than 6-10 in conference play.

I love the Lady Hawks, but they deserve better.

I'm thinking Bonnie is done because I don't know where they are going to find 4 more out of this remaining schedule. I had OU at home as one. MU at home as another. Maybe they will take care of OSU and Texas, I don't know, but I don't see them getting the benefit of the doubt as a bubble team if they go 3-8 down the stretch.

I would love to be wrong. Prove me wrong ladies. Steal a couple road upsets and get Sutherland in the dance.

THE BIG 12 IS NOT AS TOUGH AS IT HAS BEEN AND GUESS WHAT? BONNIE SUCKS. Its so sad to see the talent we have had not get to make noise in the tourney. Does anyone not remember how highly recruited Angel was? What a waste. Get Newmans coach out of Wichita for next season and see just how damn good we can be!

I agree, the Big 12 is not as tough this season; however, ALL of the girls’ talents are being wasted, not just Angel’s. The majority of these girls were highly recruited by major conferences including the SEC, ACC, Big East, etc. but they chose KU for its great basketball history and atmosphere, only to be mismanaged once the season started. Asia Boyd is the highest recruit HCBH has received in her tenure. We will never know what she can bring to the table until she is given an opportunity. A player will only be as successful as this coach wants them to be, therefore this team can never turn the corner because certain kids have to play with restraints on them. Seems as though this is a system designed for one - two players to excel while the others are made to sit back, watch and waste away. How can you win in any conference, much less the Big 12 like this?

I watched the Kansas State loss, Iowa State overtime win, Texas win, Texas A&M loss, OU loss, and Baylor loss. With the exception of Baylor, the others were our games in regulation. We did not need overtime for Iowa State, nor OU, but when you’re mismanaging players, well………Much as I support the women’s team, it is hard to support the HEAD Coach. The assistants seem to know more about game planning, strategy, and game execution than the one that is being paid the big bucks; however as usual they have no power under HCBH.

Everyone needs to be given an opportunity to see what they can do. CeCe Harper did a great job at Baylor and followed it up during the OU game, only to sit during overtime WHY? Since we’re down to 10 players now, developing and giving everyone an opportunity to contribute shouldn’t be hard to do. So much talent wasted over the years.

Keena Mays and Donielle Breaux were smart and got the heck out of dodge.

Win or lose I am sticking to my guns. These girls deserve better! I have said it from the beginning to the end HCBH does not know how to manage the talent she has on the team. You have to look at the overall program not just game by game. Not only does she SOMEHOW recruit highly ranked kids, she does not know what to do with the talent once they are here. She continues to lose players every year. Players are leaving in the middle of the year now. I am sure there will be more to add to the list in March or May. Keena and Donielle did not waste their talent under this program any longer. Look at other good programs, are we hearing about players leaving under Pat Summitt, Geno Auriemma or Kim Mulkey? Win or lose a sign of a good program players stay to the end. Make you question what is truly going on? Keena was a player (who should have been in starting lineup from the start of the season). Donielle who we did not have the opportunity to see her talent. Asia, highly recruited player since HCBH been here at KU. We have not seen what she can contribute? A good program develop and work with freshmen to gain experence for this level of play. She can't be worse then the freshmen that is starting. This team is not that good to not have every player contribute something.

CeCe again having a good game but did not touch the floor in OT. What was the problem?

HCBH is not doing anything different from the past years. Pre-season was a weak schedule. The W's from the stronger conference teams are because they played horrible that night and KU came on top. Not because HCBH has turned the corner and has become this GREAT coach all of a sudden.

Bonnie is the best paid bad women's basketball coach in all of Division I. She is the luckiest person in the world to have the contract given her (certainly not earned) by for Lewcifer Perkins which has made her a millionaire!! Only in Lawrence under the rule of an old fool could this happen.

You people are crazy. Watch out for what you wish for, you will get a recycled coach if they replace BH, and the results will not be good. Remember how BAD the program was before BH, do not forget that. The hole was very deep, and now, when you can see the light at the top, you want to start over. Gill was not given any chance to succeed so the new AD may have a quick trigger vs Lou's slow, steady plan, so which plan is better ??

I bet you loved Turner Gill too. Am I right?

As I said , Gill was not given enough time to establish his program. And, as I said, Kansas now has a recycled coach that had excessive support and money at ND and look at the results. Loss after loss after ........ You tell me what do you think ???

I tuned in when our gals were leading by 10 midway with like 8 minutes to go. The lead was blown by giving up simple layups!! some, completely unguarded. they didn't even make OU take a jump shot. I support the gals, but that was plain ugly and unnecessary.

OU just seemed to know how to finish a game better.

I thought i posted this earlier but maybe it got deleted:

We've only got one senior on the team, so the future looks bright!!

I sometimes think there is an unconciously motivated expectation put on the women's program because of the unbelievable success of the men's program.

It's only human nature but that still doesn't make it fair.

Tough, tough loss. Not going to conclude anything beyond that simple and obvious fact. And, not sure if it's accurate to say, but had all the players worked as hard as Angel Goodrich and Ce Ce Harper in this one, we'd have had a 15 point plus win.