Kansas guard Elijah Johnson whips his towel in excitement after a near dunk by teammate Jamari Traylor against American during the second half on Saturday, Dec. 29, 2012 at Allen Fieldhouse. At left are KU guards Travis Releford and Niko Roberts, right. 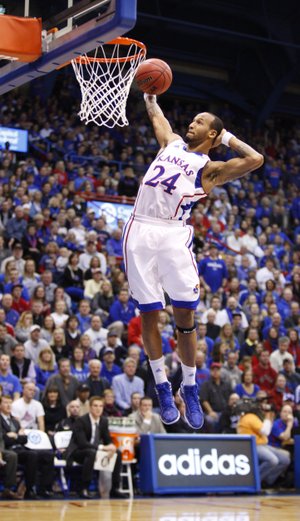 KU coach Bill Self talks after win over American

Kansas coach Bill Self talks to reporters following the Jayhawks' 89-57 victory over American on Dec. 29, 2012.

But the way American coach Jeff Jones saw it, it was the play of KU point guards Elijah Johnson and Naadir Tharpe that made things oh-so-easy for Releford, who hit five of six three-pointers and led all scorers with 19 points.

"You gotta give Tharpe, in particular, credit," said Jones of the KU sophomore, who finished with 12 assists and no turnovers in 20 minutes. "The 12 assists, that's a great number. And 25 assists on 34 baskets for (KU) is another really high number. And I think a lot of that is really due to their guards being able to drive the ball (to) force us to react."

Jones said he and his players knew they had a difficult task heading into Saturday's contest and their gameplan centered on two things: First, taking away the inside, where 7-foot center Jeff Withey created a match-up nightmare for the Eagles, who had just two players taller than 6-foot-6 play more than three minutes in the loss; second, limit the opportunities that KU got off of drives to the basket.

The Eagles (4-9) were unsuccessful in both areas. Withey finished with 11 points on 5-of-7 shooting, and KU's post players combined for 31 points and 22 rebounds on 14-of-20 shooting. But Jones was far more concerned about his team's inability to stay in front of the facilitators of KU's offense.

"In an ideal world, we would've done a better job of containing their dribblers," Jones said. "They don't have a lot of 'em. It's Johnson or Tharpe. The other guys are what we refer to as straight-line drivers. But those two guys (Johnson and Tharpe) were able to get into the paint and, it might be on the other side of the floor, but they do a great job finding those spot-up shooters."

The Jayhawks shot 15-of-24 from three-point range, one make shy of tying the school record for three-pointers in a single game. The Eagles felt every one of them.

"It wasn't one or two guys," Jones said. "It seemed like it was the entire team."

Added American senior Stephen Lumpkins, who led the Eagles with 16 points: "It was tough to defend them. We really tried to focus on protecting the rim and not letting them get a bunch of easy dunks. It's tough when a team gets going like Kansas did."

When asked what he did — or at least tried — to counter KU's hot hand from behind the arc, Jones' answer provided a glimpse into just how helpless his defense was in this one.

"It'd be one thing to say, 'Get up on 'em and contest,'" he said. "But with Tharpe, he was getting into the lane and, if you're playing good help defense then you're reacting to that penetration. ... The way they were shooting the basketball, we just didn't have much of a chance."

Because of his team's hectic December schedule, Jones' first glimpse at the Jayhawks this season came just a few days prior to Saturday's tipoff. Evidently, a few game films and one very long, very painful in-person look was all the former Virginia head coach needed to make a read on where this KU team ranks.

"They're a really good team regardless, but if they can shoot the ball like that, that takes them to a whole (different) level," he said. " ... They're as good as anybody in the country."

I hope KU doesn't fall in love with the three. I know that is what was there tonight, but the prospect kinda bothers me.

I don't know, dylans, I'm pretty enthused about our "3" ability this year. There have been years where our lack of 3 point shooting has cost us dearly in the Big Dance.

I like the three as a compliment to the inside game or to open things up. Not as the primary scoring option. You are correct a lack of 3 pt. shooting has cost KU in the past, but the Jayhawks scored 100 without a single 3 not too long ago also. And teams that live by the three die by the three.

I agree. KU's strength, is and always will be with Self, great team dense and on offense pounding the ball inside. It was not that many games ago when KU was 2 for 22 from the 3. Teams have off shooting nights, but the constant with winning is getting more easy baskets than the opponent. Yes, KU has better shooters this year, but it is unlikely they will shoot 62% from the 3 very many night. Inside/outside is why Self has won >80% of his games at KU.

The 3 is good so long as it's not just the 3. A cold night from long range needs to be cause to successfully shift to our more normal offense. A combination of both could be deadly.

That is what I called a well-tuned machine, distributing the ball unselfishly and taking the good shots. One of my most favorite things about KU hoops is the crisp passing game.

Man, seems like every time out this team finds a new gear to shift into. Granted American isn't like a Big12 team skill level, but still I like the sound of those numbers.

That was one ugly game. Very frustrating to watch

I kind of like that KU is showing the ability to rain in the 3's. It just makes KU harder to defend, as if that wasn't hard enough already. Then there is EJ and Mclemore and Kevin Young's active hands and feet. Ellis is getting more comfortable and if White and Traylor work hard the next couple of weeks and get into their games within this system, KU will be as good as any team in the country, and maybe a level above that.

Were any of you concerned about the lack of ethnic diversity of American U's basketball team? They made Coach K's Dukies look like the United Nations. I hope it's just a coincidence.

Gee. "Ethnic Diversity" is not something I've ever thought about re college basketball. I usually just ask the basics: Are they well coached? What kind of defense do they play? Do they play as a team? etc.

Seems weird in the year 2012 for a Div. 1 team to play 5 white starters and host an almost all-white bench.