Kansas center Jeff Withey deflects a shot by Richmond forward Derrick Williams during the second half on Tuesday, Dec. 18, 2012 at Allen Fieldhouse. 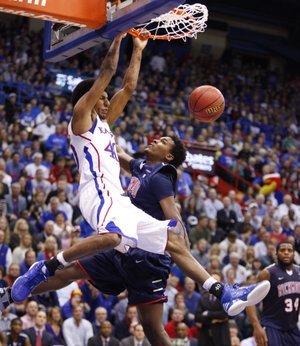 Images from Tuesday night's game against Richmond at Allen Fieldhouse.

“I couldn’t believe they started four seniors,” Mooney said. “I don’t know of any other of the highest major teams that have so many senior players.”

Tuesday night, during an 87-59 drubbing at Allen Fieldhouse, Mooney and his team took a figurative punch from each of those KU seniors.

The biggest blows were thrown by center Jeff Withey, who dominated on both ends and finished with 17 points, 13 rebounds and four blocks in 26 minutes.

With just over five minutes remaining in the first half and the Jayhawks (9-1) in complete control, Withey caught the ball in the paint, rose for a shot, had the ball knocked away, tried to bat it in out of midair, corralled the miss, dropped it in and was fouled. The Spiders were helpless to stop any of it, and the dejected looks on the faces of all five Richmond players on the floor said it all.

“We knew that he would score tonight,” Mooney said of KU’s 7-foot center. “But he was able to score a little bit too easily on us.”

Withey’s old-fashioned three-point play pushed KU’s lead to 31-11 with 5:08 to play in the first half and was just one of more than a dozen moments in which he impacted the game. Most of Withey’s damage came in the first half, when he made five of seven shots and led both teams in points (11) and rebounds (eight). He finished 7-of-9 shooting and made three of the four free throws he attempted while adding two assists and two steals.

“He’s a great player,” Mooney said. “How much he’s improved over the course of his career, which has been well documented, is really impressive, and it’s a credit to him and the coaches and the program.”

The play of KU’s other seniors was more than enough to support Withey’s night, as point guard Elijah Johnson finished with eight points and seven assists, power forward Kevin Young added eight points and nine rebounds, and wing Travis Releford made all but one shot he took and finished with 11 points, two steals and two assists. All four played at or below their season average for minutes.

“I thought they were every bit as good as advertised,” Mooney said. “And we weren’t able to compete as well as we would’ve liked. ... I’m most impressed with how they share the ball. This level of player and recruit and things like that, and to share the ball so well and so easily is really impressive.”

Although they acknowledged how talented and tough a team KU fielded, the Spiders (9-3) said they most regretted how they let the game get out of hand so quickly, a fate suffered by the Jayhawks’ last three opponents.

“Just to come out with more energy,” said Richmond guard Darien Brothers, asked what he would change if he could do it all again. “We let them get on a couple of runs in the beginning, and we let that get to us.”

Added Mooney: “We shot so poorly to start the game. I think it gave us a very difficult time, both defending them in transition and finding other ways to score. I wish we had done a little bit better.”

A win @OSU and KU is looking at top5, maybe 4, but the odds of that are pretty low. KU coming off 3 easy wins, OSU coming off a rough game against Winthrop and still chompin' at the bit for a quality opponent after the loss @Duke where they should have put themselves in the #1 conversation. Their defense is going to be rough to go against.

as far as I know the tipoff time has been the same all week. It wouldn't have had a change since it's being aired on ESPN. Sorry you missed it bro. Great show.

If you did miss it, you can always re-watch it on espn3.com

I had church, had to watch on espn3 replay, which was fantastic

ESPNU is televising it at 12 Central today.

I think in early schedules, it was 8 pm (that is the time I put on my calendar)

Replay tomorrow morning at 7 am on ESPNU.

Saddle Up: Trips to Kansas are no fun (By Eamonn Brennan | ESPN.com)

I'm guessing you didn't. After Richmond's 2011 Sweet 16 run, Chris Mooney's program went through a classic rebuilding season, one that should have been much worse than it was -- the Spiders lost four starters and 74 percent of their point production and still managed to go 16-16. Five-foot-eight guard Kendall Anthony became the Atlantic 10 Freshman of the Year, and Cedrick Lindsay, Darien Brothers and Derrick Williams flashed the potential to form a really intriguing offensive group.

A season later, that's exactly what has happened. Mooney's team boasts a top-20 effective field goal percentage and a top-40 offensive efficiency ranking; the Spiders hit 38.8 percent of their 3s and 52.1 percent of their 2s. Their top four offensive players -- Williams, Anthony, Brothers and Lindsay -- have thus far all posted offensive ratings above the 115 mark, which in lieu of a detailed explanation is really, really good.

The only problem with all of this? Richmond doesn't defend. Kansas does. And Tuesday night Richmond is going to play at Kansas.

It has taken the Jayhawks a little while to find their offense -- they don't shoot it from outside as well as coach Bill Self's teams usually do, and Ben McLemore has eased into his starring role -- but the Jayhawks, as usual, are one of the nation's top defenses. Plus, they're destroying people at home. In the past two games, Kansas beat Colorado 90-54 and Belmont 89-60; neither of those teams is remotely close to something you'd call bad.

So while it is nice to see Richmond get on the national dial for a night and maybe get to show off that sparkly new offensive efficiency, the Spiders still have to figure out some things on the defensive end, and Kansas is neither a team nor a venue conducive to working out the kinks.

Thanks, Hawkswin. That last line is a classic!

I am worried about Withey and his chances of setting a new block record. Eventually no one is going to try and shoot anywhere near him and his block numbers are going to tank. Maybe we should require him to play with one hand behind his back on D to encourage people to challenge him. One leg perhaps? Something has to be done and done quickly before his average drops.

All speculation with tongue in cheek! :)