Kansas freshmen Ben McLemore, back, and Jamari Traylor use a cart to shop on Thursday, Dec. 13, 2012, during the Jayhawks' holiday shopping excursion to Wal-Mart. 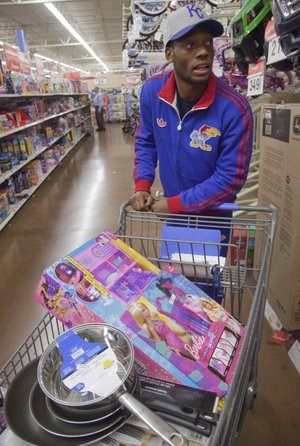 He knew KU freshman forward Jamari Traylor would be the one right behind him. Young described the two roommates as “goofballs.”

“We’re just out here having fun,” McLemore said, “doing something special for the kids and these families.”

For the 16th straight year, the KU men’s basketball team shopped for needy families at Wal-Mart in south Lawrence. The Jayhawks, who were given $100 budgets for each person on their shopping lists, bought items for around 70 people from 17 families with money raised from coach Bill Self’s Assists Foundation and a fund set up by Roger and Linda Morningstar.

Red-shirt freshmen McLemore and Traylor shopped for their lists together and provided entertainment while doing it.

At one point, McLemore grabbed a black hat for each of them, and they continued their shopping with the accessory.

“I just rolled with it for kicks,” a smiling Traylor said. “Everybody was taking pictures, so I guess we were doing something right.”

While having fun, Traylor also took his shopping responsibility seriously. One boy on his list wanted Spiderman toys, so Traylor grabbed a few.

“I’m just happy to be out here to put a smile on somebody’s face,” Traylor said. “I know some people are less fortunate than me, so to take the time out to provide a little change, a little smile, it’ll mean something to them.”

Other Jayhawks were just as focused on their lists.

He also made sure to add in a personal touch, grabbing a skullcap — one of the items he wears frequently himself because his head often gets cold.

“It’s kind of interesting seeing all these people looking at us like, ‘What are we doing in here?’ We’re human beings, too, just trying to help people out,” White said. “I think that’s a great image for the program.”

Senior guard Elijah Johnson flipped through a rack of Kansas hooded sweatshirts, taking time to pick out a good style for a boy and girl on his list.

“Here’s big fella’s shirt right here,” he said, holding up a blue hoodie. “I’m going to get it right.”

Young tried his best to branch out from his original list. One mother wanted a queen-sized blanket, so Young added sheets and a pillow to go with the blanket.

One boy asked for Hot Wheels, so Young picked out a car set called the “Mega Hoop Mayhem.”

“Any time we can get the opportunity to give them more,” Young said, “it’s always a good thing.”

Self was happy to see his players continue the holiday tradition.

“I think they take pretty good pride in it, as far as trying to get the most bang for the buck,” Self said. “I don’t think very many of them have had many opportunities to shop with a budget like this.

Jamari and Ben lookin' all Nation of Islam for the holidays. Wassalamu alaikum and Happy Hannukah! Rock chalk.

I've only seen these guys on television, but I am pretty sure that Ben is pushing the cart and Jamari is riding, right?

You're right. Thing is, they switched back and forth throughout the night. Kevin told me he saw them when Ben was in the cart.

A show of real class.

Glad they were having fun and it's all for a great cause.

Another article said he got As and Bs.

Ha. Last year, I believe Naadir (could have been someone else) was pictured riding in the shopping cart and everyone threw a fit about him not representing KU properly. This year Jamari and Ben do the same thing and nothing. Oh, what a difference a year makes?

McLemore seems happier to be at Kansas and more a part of the team than Xavier Henry and Josh Selby ever did. Looking back, I kinda forget they ever even played at KU.

Xavier lead the team in scoring that year he was here. I thought he was a little weak on defense and took some really poor shots at the wrong time in the game, but I don't really have anything bad to say about X. He was a pretty good one-and-done at KU.

And I truly believe that Selby just had an unfortunate freshman year at KU, which was not entirely his fault. He's clearly a very talented player. He just had to start the season waiting a few weeks before he could practice with the team and ended up with a nagging, season-long injury. Even when Self took him out of the starting lineup for a few games, he didn't say it was because Selby wasn't talented. He said it was because Selby wasn't 100%. We all wish Selby would have played better at KU, but I don't like to throw him under the bus. The only thing I didn't agree with was Selby going pro after one sub-par year of college ball. I feel like if he had returned for a second year, KU would have seen a beast of a PG and he probably would have upped his draft stock considerably.

what the hell for?

B0B - Obviously GHY knows something we don't about the NCAA prohibiting current players from riding around in shopping carts.

sarcasm gets too easily lost on the internet.

Since this is off subject to the sport anyhow, just sayin', why can't they go downtown Lawrence and pull together some gifts not made in China? Seems like a better path to establishment as "America's NCAAMBB Team".