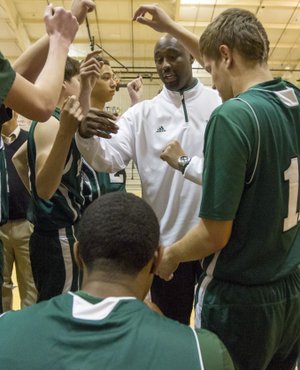 For four seasons in the late 1990s, Billy Thomas played in front of thousands of fans at Allen Fieldhouse as a member of the Kansas University men’s basketball team.

Now in his third season with the Knights (3-5), Thomas received a warm welcome from the crowd during pregame introductions, which he greatly appreciated.

“I’ve got a big-time affinity for everything Lawrence,” Thomas said. “Ever since I got here in 1994, Lawrence has always been and will always be a special place for me.”

Accordingly, Thomas — his 269 three-pointers are second in KU history, behind Jeff Boschee’s 338 — said parts of his coaching style come from his time playing under former Jayhawks coach Roy Williams.

“Our mentality, our style of play, everything stems from that,” Thomas said.

But, the former Kansas guard pointed out, he uses a lot of things he learned from other coaches through the years, too. After all, there are some significant differences between the team he coaches and the ones Williams led.

The Knights excelled in the half court against Seabury (0-5), moving the ball crisply to create open shots. Barstow made 28 of its 56 field goals and only had eight turnovers. Jeriah Horne (12 points), Cole Childers (11) and Alex Acuff (10) all reached double figures for the Knights, but Seabury freshman Caleb Owino (17) was the only player on his team to do so.

Though the Seahawks played their best basketball in the second quarter, when junior Joe Simpson knocked down two three-pointers, they trailed 37-21 at halftime, and the Knights put them away for good with an 18-2 third quarter.

Seabury coach Ashley Battles said he didn’t tell his team a local legend would be on the sideline for Barstow.

“We were more worried about the guys who we were gonna play than the coach,” Battles said of Thomas, with whom Battles has worked in the KC Run GMC AAU program. “I did tell them they could bank on, from a coaching standpoint, we’re gonna get out-coached tonight. He knows what he’s doing.”

Barstow made just three from behind the arc against Seabury. But that had more to do with Barstow’s ability to get to the paint against the Seahawks. Thomas still has a shooter’s mentality, even as a coach.

“I tell the guys, ‘If you’re wide open, shoot the basketball,’” he said.

Billy the Bomber!!
Great to see you back and involved in teaching kids his skills. I loved watching him come downcourt, slip a screen to get open and drain one for three. He was like silk on silk!!! Extra Smooooth!

One of my all-time favorite Jayhawks - glad to see him back in the news.

Probably the smoothest shooting motion I have ever seen. That said, I don't think Boschee will still hold that record in 5 years......the name Conner Frankamp will.

If Conner stays a full 4

Boy I love Billy, but it is a shame he struggled so badly in that Rhode Island game. That one is still a heart-breaker.

If you want to know what determination and grit in BB are think back to Billy's playing days as a collegian and pro. Billy had basketball guts. Go, Man, Go!!!!

although nothing will be as painful as the ball that he dribbled off his foot under the basket with two minutes left against Arizona...many probably have blocked that from their memory banks...

I thought the dribble off the foot game was Syracuse? I could be mistaken though. Wasnt it an Elite 8 game?

They probably don't have a Jauque Vaughn, Scott Pollard, Haase, Robertson, or Bradford either. :-) that comment just made me laugh. :-) That was a great team and Billy Thomas was a special part of it.

I DON'T BELIEVE IT!!! A really neat story about a great Kansas University basketball player returning to our area, coaching high school basketball - and you comment on the RHODE ISLAND and the ARIZONA games!!! What in the h*** are you thinking about?

My favorite recollection Billy Thomas moment has to be the time I took my daughter to a game, and because I had been fortunate enough to have gotten 2 "turn back" tickets (then available through the KU ticket office), we had seats on the first row, even with the baseline, across from the KU bench. Thomas drained a three from our corner and, in my (and her) versions of the moment we say that "he took the shot while sitting in our laps." (She is now in her 40's and we haven't changed our stories.