Notebook: Travis Releford — not Ben McLemore — has dunk of the day

Kansas guard Travis Releford extends to dunk over Colorado defender Jeremy Adams during the first half on Saturday, Dec. 8, 2012 at Allen Fieldhouse. At right is KU forward Jamari Traylor. 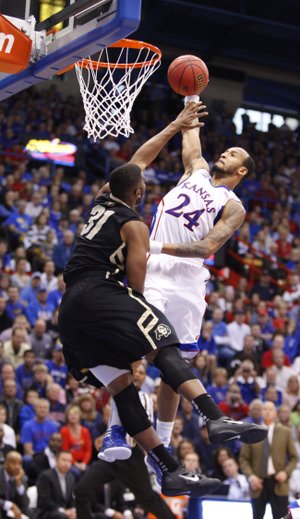 Images from Saturday's game against Colorado at Allen Fieldhouse.

KU coach Bill Self talks after win over Colorado

On Saturday, Travis Releford’s driving one-handed slam dunk over Colorado’s Jeremy Adams is the one that had the fans most energized — the jam coming with 1:29 left in the first half of KU’s 90-54 rout of the Buffaloes in Allen Fieldhouse.

“We know Travis can get up. Me and everybody in the gym thought he’d throw it back to Jamari (Traylor, who initiated the play by stealing the ball well before midcourt and passing ahead),” KU senior Kevin Young said. “When he (Releford) took off, it shocked me. We knew he could do it. We just weren’t ready for it.”

Releford stared down a TV camera lens after the dunk, the crowd exploding in joy with KU up, 41-20.

“I mean, he counted his steps. He looked like he was getting his feet together to block the shot,” senior guard Releford said of Adams, who was posterized on the play. “I just went up and made a good play.”

Self scores: KU freshman walk-on guard Tyler Self, son of coach Bill Self, scored his first points as a Jayhawk. He hit a floater off a drive to the goal with two seconds remaining.

“I thought it was great. His mother will probably be nicer to me now,” Self joked of his wife, Cindy. “Of course he (Tyler) joked afterward when he gets a head of steam he’s hard to stop in transition. ‘Yeah right, son,'" Self added with a smile. “It was fun. I would have felt good for anybody if they made a basket there.”

“I got a good pass from Niko (Roberts) and got a chance to go get a bucket with a couple seconds left and happened to do so,” Tyler Self said of his basket. “I love the floater. That’s my go-to shot,” he added with a smile.

Happy graduation: KU senior Jeff Withey takes part in graduation ceremonies at the Lied Center Sunday. His degree is American Studies with a minor in education.

“I think Spencer (Dinwiddie, four points, 21 minutes) may have tweaked his ankle early, so that hurt them. He got two fouls quick,” KU coach Self said. “I thought Travis (Releford) did a great job on him. I thought Elijah (Johnson) did a good job on Booker (Askia, 15 points, 5-of-15 shooting), especially the first half, I thought our defense was really good the first half. Really, their best offense was throwing it to the big kid down low, Scott (Josh, 19 points), and him scoring on our bigs. But I think the biggest thing was our energy. That’s the first time we’ve played a game in our building where we actually didn’t allow our opponent to get comfortable early in the game. That was a big part of it.”

This, that: Self said Elijah Johnson (11 points, four rebounds, three assists) felt better than he has the past few games. He’d been slowed by a bruised knee. ... Baseball greats George Brett and Joe Carter attended. ... CU coach and former KU guard Tad Boyle received loud applause during introductions. He waved to the crowd to acknowledge the cheers. A highlight of Boyle was shown in the video shown before KU player introductions. Also, there was a trivia quiz question involving Boyle on the center videoboard during the first half.

A dunk is only worth 2 points, but with it comes a lot of intimidation. Withey needs to dunk more....IMHO

Werent we saying last year that he needs to dunk everything?!

I LOVED the dunk, but the stare cost us points on the transition. Get up and throw it down, then get back on D. Great domination yesterday, Hawks!

sorry about the huge font - not sure how that happened.

I think the announcer said Releford started the season going 0-11 on 3's?, so that 70% is lower than what it possibly could be, such an efficient player. As much as the announcers and articles talk about "glue guys", this is the first real glue guy we've had since Russell. A glue guy should be able to go off for 20+ points if the defense lays off him, otherwise he's there making the rest of the team look better.