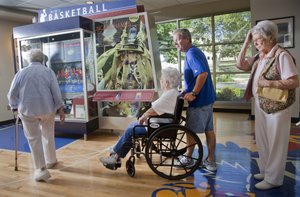 A group visiting from Meadowlark Estates Retirement community in Lawrence visiting the Booth Family Hall of Athletics Wednesday passes by a display on Kansas University’s men’s basketball team. KU has plans to build a two-story student center at the northeast corner of Allen Fieldhouse, an area visible through the windows in this photograph and in the photograph BELOW. The center will house Dr. James Naismith’s original rules of basketball. From left are Marge Randall, Rosie Kelly, her son Don Kelly and Betty Lukens.

Kansas University has plans to build a two-story student center next to the northeast corner of Allen Fieldhouse that will serve as the new home for James Naismith’s original rules of basketball, KU officials confirmed on Wednesday.

Plans are still in the preliminary stages, and many details still have to be worked out, said Dale Seuferling, president of the KU Endowment Association. An architect for the new building could be selected as soon as next month.

“It’ll be kind of the place to be on the southern edge of campus for students between classes to drop in, or for faculty to meet for lunch,” Seuferling said.

And the focal point, he said, will be a new exhibit for the rules. The building will be connected to the other historical exhibits in the Booth Family Hall of Athletics.

“I think it’s spectacular, actually,” said David Booth, an Austin, Texas-based investor who purchased Naismith’s original rules for $4.3 million at auction in December 2010 before donating them to KU. “The way things have worked out, I’m glad I was able to buy the rules.”

The square footage of the space, the look of the building and many other details will come later, after the architect has been selected, Seuferling said.

The building will be funded entirely by private donors, Seuferling said. Several donations have been secured, but he declined to say how much money has been raised or to provide the names of people who have contributed so far.

Plans for who would operate the student center and what kinds of services would be in the building are still undetermined, said David Mucci, director of the KU Memorial Unions.

“It’s an interesting prospect, and it meets a lot of natural needs down there,” he said, adding he envisioned a space that served many purposes.

Today, the nearby Burge Union is used mainly for office space and meeting space, much of which would not be duplicated in the new center, Mucci said.

“You have a whole new dynamic there, which I think is very exciting for a retail-based community center,” he said.

He said he could easily envision a coffee shop, a quick-service food court and Kansas Athletics’ KU Store having a presence in the new building.

One option would move the nearby Burge Union’s Crimson Cafe operation to the new space, Mucci said. With it could move Kansas Athletics’ Jayhawk Training Table program, which provides food service for KU athletes.

“To have a new top-notch facility built for Training Table and to have it in there with a piece of KU history is going to kick it up another notch,” Mucci said.

I am pleased and excited to see this happening. Lawrence is becoming a true tourist destination for basketball fans. I remember coming up from Wichita in the 70's and 80's on non-game days and feeling like there was no focal point for KU athletics. With the Hall and now the Rules, we are so much closer to seeing it be the destination it deserves. I hope the Chamber or Visitors offices will partner with KU to work the entire community into this plan. Pull people off of I-70 as well as those who want to come to Lawrence to see the history. One thing I could envision that we add is some kind of virtual "Coaching Tree" that is constantly updated with those who have roots of some kind associated with KU coaches going all the way back to the Inventor. RCJH!!!

Maybe tie in deals with the Oread Hotel or offer a football package that includes football tickets, deals on room and board at the Oread, a tour of Allen and Booth and the new student center. I think you are on the right page with this, and the city and university can make this a true destination for sports fans. Good thought and discussion piece Jake.

Thanks for the kind reply. And I love your ideas as well. Think of all the opportunities. The Naismith and Allen gravesites, Locations of the earliest games in Lawrence, and merchandising too. I think you are right on target on the tours. I would love to walk through the basketball dressing rooms and football facilities and would pay for the privilege.

This is on my "bucket list" of things to do sometime down the road. I have not been able to go back to see the Booth Family Hall of Athletics. Now, with this announcement of Naismith's original rules of basketball being housed at AFH, I gotta go and see that!

The rules belong as close the Fieldhouse as we can get them. Sounds like the plans are beginning to be developed. Sounds exciting. I know I will want to come by there. The whole of the project sounds more and more like a destination making the Fieldhouse what it is...a living basketball museum.

On another note, Today at 4pm a truck was unloading a tractor trailers worth of limestone in the game day emplooyee parking lot south of memorial stadium... Do what you will with that posters...

Yes, thank you, Mr. Booth! That was an awesome gift to Jayhawk fans!

It would have been nice to develop some parameters and ask for suggestions from the public as to how and where to display the rules. Tremendous ideas can be generated this way. The Vietnam War Memorial in D.C. is a great example.

You want someone to walk the rules around the court before tip? For real? I do agree that they should've moved a few displays around in the entrance of AFH, to make room for the rules. I hope the architect designs a building that fits well in that lot and doesn't look out of place.

"Think it would be a cool pre-game ritual to have someone walk the rules around the court before the tip of every game as well."

Please tell me you are joking

They should be located at center court in the claws of the JayHawk under a bullet proof piece of clear glass.

The Jayhawk has boots not claws.

Oh he has claws. He just wears boots because like a Nazi from 'Raiders of the Lost Ark' glimpsing the ten commandments, wildcats and tigers would melt/turn to dust/explode upon seeing his glorious claws.

Keegan are you reading...get a debate going over the coolest Jayhawk. I like 1923 personally...haha

I agree with putting them front and center in AFH. Now where they are front and center is a difference of opinion. I think the camera shots of the team touching the case of the rules as they approach the court from the locker room would be priceless TV every time. I also like the idea of them being the centerpiece of the Hall of Athletics entrance from the Fieldhouse. But being displayed outside of the 4 walls of the main Fieldhouse shouldn't be an option.

Bulldoze Burge Union and build new housing for the basketball team, instead of making them live in Jayhawk Towers. Think of how much that would boost recruiting.

Hey, if Booth is happy, I'm cool with it, they are his rules now, and whatever makes him happy and keeps them at or very near AFH, is good with me!

Wow, it's like the Mona Lisa is coming to KU!

It really is. Quite amazing. Who say money can't buy happiness...his money has bought numerous folks much happiness! Love being a Jayhawk.

I thought the whole idea behind purchasing the rules was not only because they belong in Lawrence but because they also belong exclusively in Allen Field House. Having a giant awkward out of place building erected out front detracting from AFH that houses faculty meetings, a cafe, and a store is the lamest idea I've ever heard. The rules belong front and center upon entering the main entrance of the Field House. Seriously? Who's idea was it to house James Naismith's original rules of basketball... with hot dogs, nacho cheese and souvenir coffee mugs?

So glad the rules are coming to KU!

As an archivist and historian, I see this addition as a major feather in the cap for our school.

Next, I would like a 30 foot statue of James Naismith and John Brown kicking Truman the Tiger down a flight of stairs.