Weis leaves impression on Self during practice

Kansas football coach Charlie Weis talks with the media before taking the stage Friday during the KickOff at Coringth Square in Prairie Village for the Kansas football season. 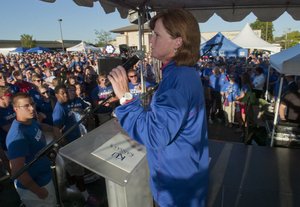 Kevin Anderson/Special to the Jo

Kansas women's basketball head coach Bonnie Henrickson pumps up the crowd Friday during the KickOff at Coringth Square in Prairie Village for the Kansas football season.

“He said, ‘Get on the line,’ and I ran over there,” Self said with a laugh at the seventh annual KU KickOff at Corinth Square. “I was nervous he was talking to me.”

In all seriousness, Self left impressed by what he saw from KU’s first-year football coach.

“This thing is different. And I’m not blasting before. It’s different,” Self said. “ ... Charlie’s style is very direct, very disciplined, very enthusiastic and won’t put up with any crap at all.”

Weis just smiled when told by a reporter that it was the first time at the alumni event that more folks had shown up to see the football coach than the basketball coach.

“We all know who’s boss in this town,” Weis said, referring to Self.

When asked what KU fans needed to hear from their football coach at a time like this, Weis cracked another joke.

“They probably want me to introduce Self. That’s probably what they want me to do,” Weis said. “Really, I’m not going to go up to the fans and make all sorts of promises. I’m just going to say that we’re in this together.”

Weis made the most of his six minutes in front of the fans, telling them his hope was that they would pack Memorial Stadium in the fall and make it a home-field advantage like Allen Fieldhouse is.

“I can just say I didn’t come here with any other mission than KU football being a perennial winning program so in December, you have something to do besides see what non-conference basketball games we’ve got scheduled before we get going,” Weis said. “An issue we’d like to get to around here is not if we’re playing in a bowl game; it’s just, ‘Who are we playing?’ That’s what we want to get to.”

He ended by telling fans that they were especially needed for KU’s first three homes games on Sept. 1, 8 and 15.

“If you’re leaving at halftime, OK, you and I are going to get into a fistfight,” he added jokingly.

Both the coaches know how to deal with questions from the press... I love the enthusiasm. I also liked the comment “An issue we’d like to get to around here is not if we’re playing in a bowl game; it’s just, ‘Who are we playing?’ That’s what we want to get to.” RCJH!

I think Weis is taking on this challenge in the right way. Instead of believing he can completely change the culture at KU, he is accepting that KU will always be a basketball school, but isn't going to except mediocrity out of the football team (or far below it, as we have been the last few seasons). If he can bring the program to the point that they are consistently winning, I think the fans will pack Memorial.

We definitely need to stop the halftime exodus. Even in the Orange Bowl year people left early, especially the students. Recruits see that and it's a big turn off.

The beer will be just as cold an hour and a half later, and it will taste a lot better when we have recruits who help us win every week.

Please, KU fans.....Do not leave at halftime, Do not say "home of the Chiefs" Lets turn this University into a football school. Then we have the best of both worlds, This is one of the coolest schools in the country. But our football fans suck...Not all, there are good football fans at KU. But we need everyone to take pride and get on board. Lets be real football fans, and let the country see a full stadium, the whole game...The parties will still be there after the game......

Especially with these 11am start times, TCU, ugh!

Because waking up at 9am is so tough...

How about we turn it into a basketball AND football school? No need for it to be one or the other. Let's go for both.

Agreed but we are a ways away. Before we could be considered both, we will need a big stadium upgrade, a good fan base (we have potential, but are not there at the moment), multiple years of winnings, and some good national coverage.

"They probably want me to introduce Self ...", said Weis.

This guy has a sense of humor, and he knows how to work with the media. He's really growing on me.

Interesting comments from Coach Self. While politically correct if you read betwen the lines I don't think there was any discipline the last two years. I am still not making any predictions except to say unlike the past two years this team will come prepared to play and compete!!!!

Also, I think that Self genuinely liked Turner Gill and would never want to throw him under the bus. Though it is obvious to most everyone that TG had his shortcomings as a coach, his character and integrity were unquestioned. And when you think about it, at the end of the day those are the kind of things that truly matter...not winning football games. Having said that, I would love to have both! :-)

Coach has done his job. Now it's time for the fans to do theirs and show up. How hard can that be? If they don't show up or leave early I hope Charlie calls them out.

The proverbial chicken and the egg question. Do fans leave at half time because the team is so bad, or is it possible to build a program and recruit when the recruits see fans leave at the half? I think in this instance we need to give The Old Ball Coach and the team the benefit of the doubt these next two years by filling the stadium and staying to the end if he has a chance to turn this thing around. No matter how good a coach he is and how good a staff he has hired, to have lasting success he has to be able to get some serious dudes in here to play. He can use the basketball games on Saturday''s at the Fieldhouse to help him recruit only so long.

It's only a 50k stadium and it's only for 6 Saturdays a year. Win, lose or draw, if we can't keep it filled until the players have walked off the field then we are the defintion of fair weather fans.

danmoore... how has the coach done his job already? They haven't even played a game yet!

He recruited players and coaches and has sparked an interest in KU football that has been absent for too long. I suspect when September 1st arrives his team will be ready to play. Now it's time for the fans to fulfill their part of the agreement.

Plus, he's done what he can do, at the time he's got available. There's not been a game played, that is true. But there's so much more to being the head coach than being on the sidelines during the game. It's all about getting the players ready to be on the field taking on the opponent. I was constantly dismazed at how unready KU's teams were under Turner Gill, especially in the third quarter when it seemed like the opposing coaches took apart Gill's game plan, coached their team with how to beat everything, and KU came out with no coaching, no changes, and got beaten consistently through the end of the games.

And there will be 50,000 screaming fans at each game

I'll be estatic if we can beat KSU at home sometime in the next two years.

To keep the fans in their seats, how about beer sales starting with the third quarter kickoff?

Another suggestion. You know those jails they use for fund raisers where you lock someone up and they have to contribute to get out? Well, we have one at every exit and start locking up the people who are leaving until they pay bail. Of course it they don't pay they are released at the end of the game.

Coach Weis is carrying a chip as well. Everyone is saying he will fail because of what he did at Notre Dame. But he's learned a lot and sometimes all anyone needs is a second chance. He's already improving in mingling with fans, boosters, and the press. Something he didn't do much at ND.