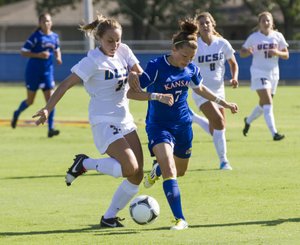 Kansas University freshman Ashley Williams scored her first career goal in the 97th minute to lead the Jayhawks’ soccer team past UC Santa Barbara, 2-1, in overtime in its season opener Friday at the Jayhawk Soccer Complex.

Williams scored on a rebound off a bad-angle shot by sophomore Haley Yearout in the seventh minute of overtime. The sudden-death goal gave the Jayhawks their fourth season-opening victory in the last five seasons.

After a scoreless first half, Kansas scored in the 52nd minute when junior Caroline Kastor connected on a shot from 16 yards out after a through ball from Jamie Fletcher. Kastor was third on the team last season with six goals and 19 points.

UC Santa Barbara tied it 13 minutes later when midfielder Miranda Cornejo slipped a ball past KU goalkeeper Kat Liebetrau with a header after a free kick from near midfield.

KU had several chances to win in regulation but couldn’t capitalize. In the first 10 minutes of the match both Fletcher and senior Whitney Berry hit the crossbar with shots, and Williams hit the crossbar in the 81st minute.

The Jayhawks appeared to take the lead in the final 10 minutes when Williams finished a loose ball in the box but was whistled for offsides.

Kansas (1-0) will meet Northwestern at 1 p.m. Sunday at the Jayhawk Soccer Complex.