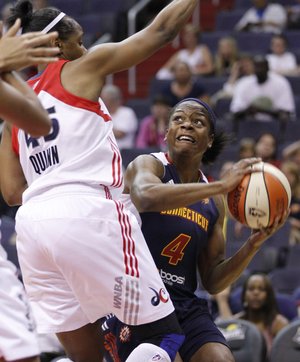 Connecticut Sun guard Danielle McCray goes up for a shot against a Washington Mystics defender, June 29, 2012, in Washington. McCray, a former Kansas University standout in her third year in the WNBA, is looking to help the Sun build on its league-best record.

On the one hand, McCray says, “It’s nice to have a little mental break and everything.”

On the other, there’s the danger the hiatus will kill any momentum McCray’s league-leading Connecticut Sun had built during their current five-game winning streak.

And McCray, the third-year pro who in 2010 left Kansas University as the third-leading career scorer in school history, has had enough unscheduled breaks in her career.

McCray’s KU career came to an abrupt — and premature — halt on Feb. 4, 2010, when she tore the anterior cruciate ligament in her left knee.

Despite her injury, which meant McCray wouldn’t play a minute until the following season, the Sun were so convinced of her ability that they picked McCray seventh overall in that year’s draft — and even traded up to do so.

“It was tough not playing, just watching, not being able to do what you love for six months,” McCray recalled of that interminable rehabilitation. “When I finally got on the court, it was such a relief to be able to play again. In just one second, I had basketball taken away from me.”

When she finally suited for the Sun, McCray didn’t disappoint.

Which brings us back to the Olympics break.

McCray has been using the time off to find her niche.

“I’ve been doing a lot of individual things, working on the things I need to do and working on myself,” she said.

Much of that individual attention is physical.

“My body composition has changed,” said the Olathe East grad. “I lost a lot of weight, in a good way, so I can move quicker. I’m able to guard a guard smaller than me. I’m a big guard, and I’m on guards smaller and faster than me. At KU, I was at a good size, but in the league I wanted to thin up a bit more.”

McCray isn’t sure what led to her decreased playing time and production in her sophomore season.

“When I first came in, as a rookie, I came out and did what the coaches wanted me to do,” she said. “I felt like they took a big risk because of my injury and, when I was healthy, I thought I could help the team out. I felt I had a lot to prove.

“(Now) as far as what we have, what our coaching system is, you just have to get in where you fit in, stay confident and wait your turn.”

McCray doesn’t really have an offseason.

After the 2010 WNBA season, McCray averaged 17.6 points, 8.0 rebounds and 3.0 assists for Hapoel Rishon Le-Zion in Israel. She spent the 2011-12 offseason with Good Angels Kosice of the FIBA Euroleague.

Once this WNBA season is done, she plans to play for another Euroleague team, this time in Italy.

“The travel can be a drag after a while,” McCray said. “But I love it over there.”

The Sun, who are tied with Minnesota with the best record (15-4) in the WNBA, will resume play Thursday at New York.

Uhh, first! and only.

I wondered if we were ever going to get a story about her again or not.